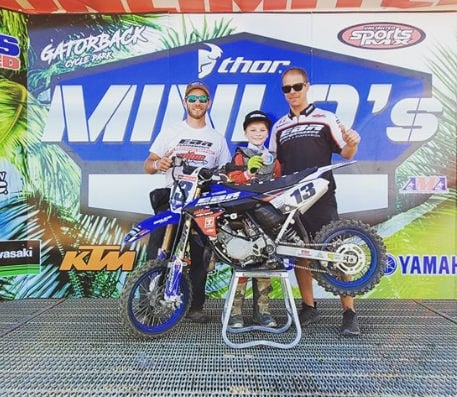 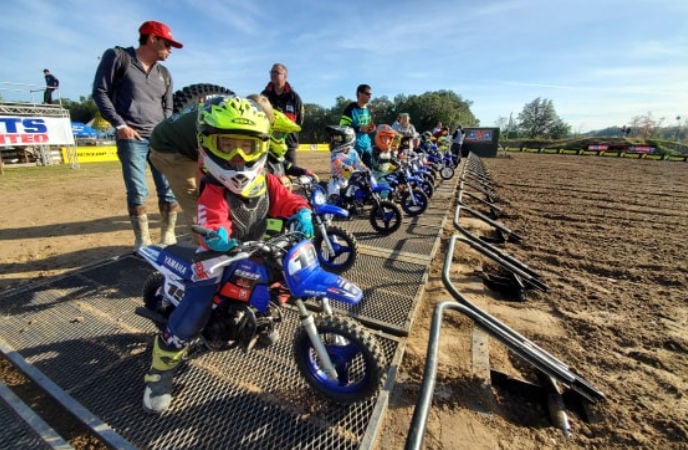 PALMER — The Andersen brothers, 11-year-old Chase and 5-year-old Cruz, competed in the Thor Mini Olympics motocross races at Gatorback Park in Florida last week. Just one year after winning the mod Supercross division for his age group on a stock dirtbike, Chase took second place in the overall standings at the 65cc for 10 and 11 year olds.

After last year’s win, Chase signed with Yamaha to ride with Altus Motorsports and EBR Performance. Not only was Chase riding a new bike on an unfamiliar track in Florida, but after his win last year Chase aged out of his group and is now racing against older competition. Earlier this year, Chase placed 11th at the Loretta Lynn national championships and was eager to defend his title last week.

“One reason why this is a very big deal is because he’s just aged into a new age group and so he’s going against up to 12 year olds,” his dad, Andy Andersen, said.

Andy started racing Chase as soon as he was able to hold a throttle at 3 years old. Chase rose up the competitive ranks, beating his competition in Alaska and holding his own against older riders in national races on stock bikes. With a factory team behind him, Chase had little time to train against hundreds of other riders in Florida. Without qualifying races featured in other motocross championships, Chase had to quickly study the course and his competitors to improve his times and make a run for the podium.

“We pulled a bold move and put a sand tire on and when we walked down the line of all 42 people in the main event we were the only one running a sand tire,” Andy Andersen said. “There’s so many talented kids there so we realized that the start was everything, that how you start was going to more determine your race than anything and that was something me and him decided as a team to switch tires and we ran the sand tire that got him launched out there in the holeshot and then it was up to him.”

Chase had taken three weeks off of training and had only four days to prepare with Robbie Smith MX racing before a 17-hour drive to Florida for the Mini-Olympics. After trailing his fastest competition by more than 10 seconds in the early rounds, Chase got to work. Chase, Andy and his team reviewed the video from Andy in the grandstands, Chase’s GoPro video and LitPro GPS data that is taken from his helmet. Chase analyzed the lines he was taking and where he was losing ground like a quarterback studying film.

“I really do enjoy it. I think it’s fun and it helps me get faster,” Chase said. “I look for little mistakes in my bike. I look for mistakes like what I could do better.”

Chase’s factory team with EBR Performance and Altus Motorsports worked nearly as hard as he did. After practice rounds, Chase’s team would take his bike completely apart, polish the gears and mill heads over and over again until Chase’s bike was as fast as it could be. When Chase still was not moving ahead at the start, he found a way to get the lead right from the start of the race.

“He went over and practiced 40 or 50 holeshots in a row right next to our race trailer in the pit and I watched him where his shift points were and how hard the bike was pulling and we dialed it in,” Andy Andersen said. “The next day and pulled a holeshot and got in the top five right away and won a moto, so a lot of it it blows my mind how fast he adapts being from Alaska and having to do that and how fast he adapts. This is these guys’ home track. We’re showing up from Alaska and have to learn their track speed within a day.”

Racing against older competition, it took Chase time to learn to adapt to the course, the competition and his new bike. With a sandy first turn, Chase was losing speed early in the race. Through studying his own film and the moves of riders moving ahead of him, Chase was able to learn from his mistakes and correct them to save a second place finish.

“Chase became a better rider because he had to adapt to a new bike. He had to rely on corner speed and track speed more than just raw power and a smooth transmission and that made him a really good rider,” Andy Andersen said.

When not racing in his own heat, 11-year-old Chase was coaching. Chase’s younger brother Cruz also finished in the top 20 of his age division after scrambling for a new bike when the classifications were changed in October.

“I train him how to do it. Me and my dad can train him. He can watch me race, he can watch other people race with me and I can tell him what to do,” Chase Andersen said.

Cruz adapted to a new bike class and raced against riders as much as two years older than him. Despite the competitive disadvantage of the new bike, Cruz took after his older brother and passed dozens of other riders during the four-lap races.

“He kind of got thrown to the wolves but he still did really good. He almost top 10’d and he’s young for his age division,” Andy Andersen said.

While this year’s motocross season is over, Chase will resign with EBR, Altus and Yamaha for the 2020 racing season. While always happy with a throttle in his hand, Chase hopes to return even faster in 2020.

“I didn’t really get that much time to train this year,” Chase Andersen said. “I still got 2nd because I’m known as a fast learner in racing and all those people, they live at motocross tracks and I just come down here with only a week of training and kind of beat them.”