Wasilla defensive lineman Payson White runs the ball after intercepting a pass during a 20-14 win over Palmer in the Potato Bowl Friday. 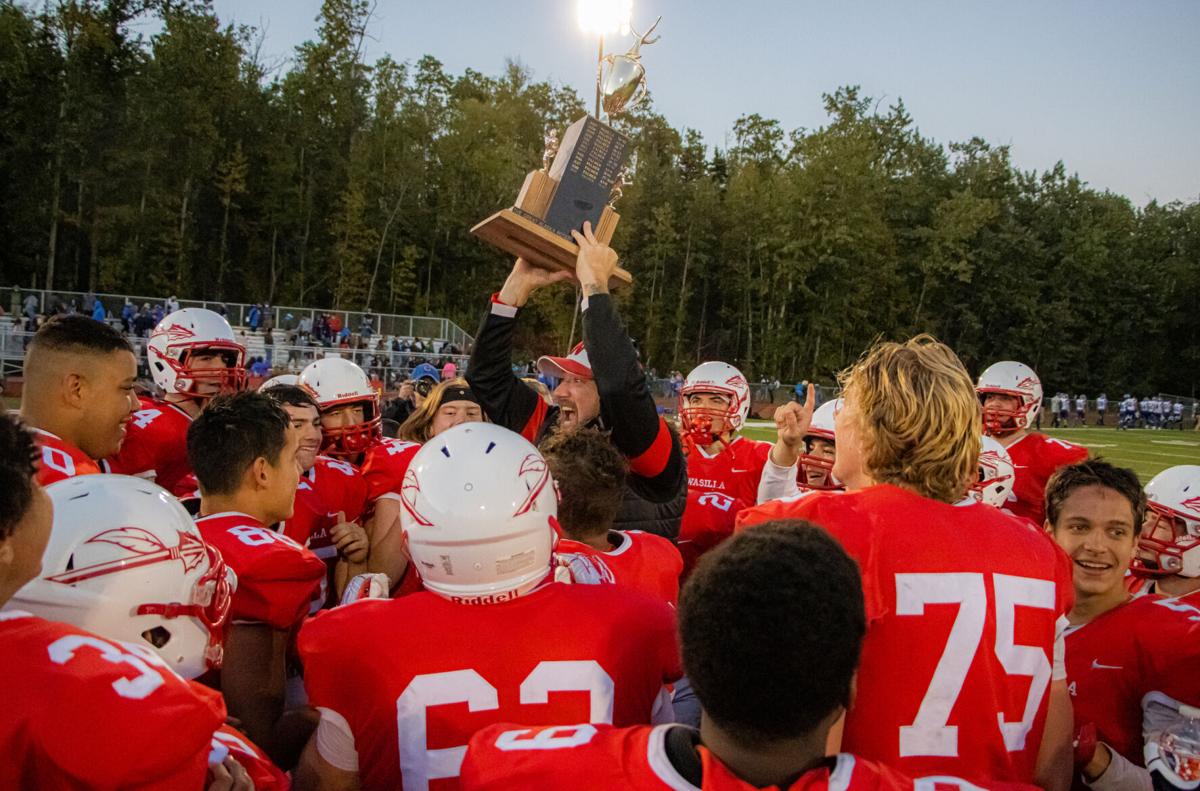 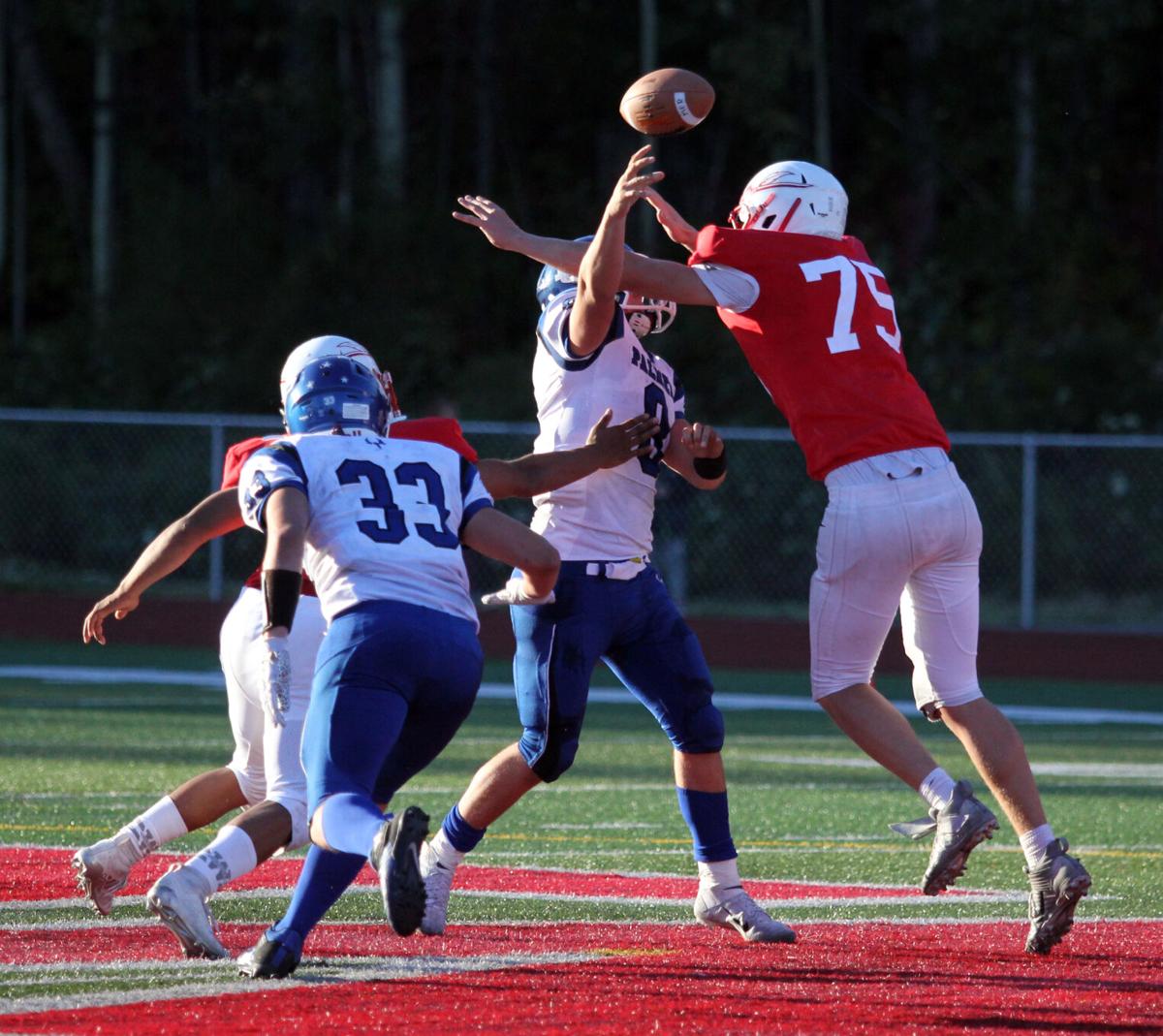 Wasilla defensive lineman Andrew Devine gets his hands up as Palmer quarterback Ben Simmerman attempts to pass during Wasilla's 20-14 win over the Moose. 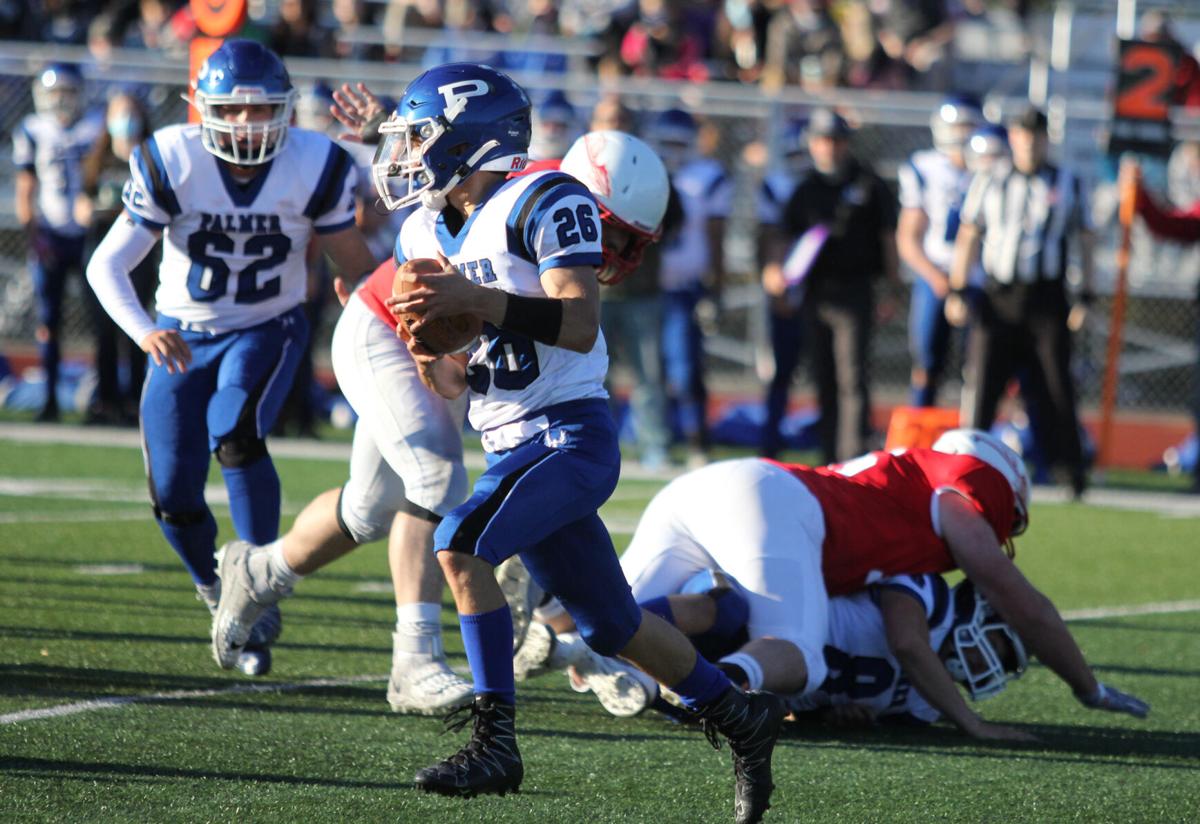 Palmer's Isaiah Perkins takes the pitch during a loss to Wasilla. 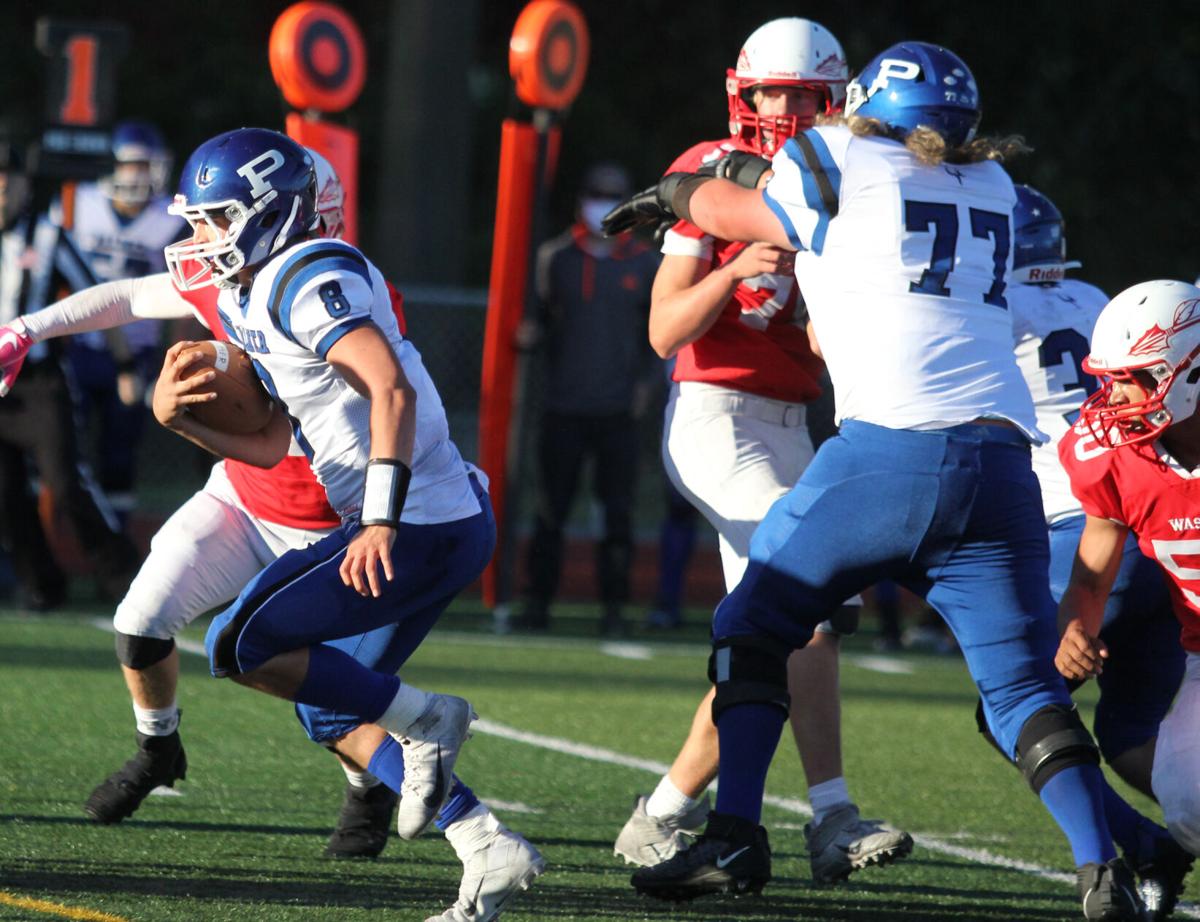 Wasilla defensive lineman Payson White runs the ball after intercepting a pass during a 20-14 win over Palmer in the Potato Bowl Friday.

Wasilla defensive lineman Andrew Devine gets his hands up as Palmer quarterback Ben Simmerman attempts to pass during Wasilla's 20-14 win over the Moose.

Palmer's Isaiah Perkins takes the pitch during a loss to Wasilla.

Lineman Payson White, who stands at about 6-foot-6, reached up and snagged an interception with 59 seconds left to help Wasilla secure a 20-14 Potato Bowl win over the Palmer Moose Friday night at Veterans Memorial Field in Wasilla.

“I’ve known that kid for many years. One of the most humble, polite, loving, generous kids. Every good thing you can say about a kid, that’s him,” Wasilla head coach Ken Ottinger said after the win.

White helped the Warriors hold onto the win and deny the Moose after Palmer rallied with a pair of Ben Simmerman touchdown passes in the fourth quarter. After Palmer cut the deficit to 20-14 with just more than two minutes left in the fourth quarter, Moose senior Connor Heal recovered the ensuing onside kick. The Moose drove down to the 33-yard line, and on fourth down Palmer tried to throw the ball down the middle of the field. White pulled down the interception.

“He’s big, but he’s athletic,” Ottinger said. “He’s got some of the best hands on the team.”

White helped the Warriors win the Potato Bowl for the first time since 2014, and score a victory in a game in which the teams combined for nine total turnovers and more than 150 total yards in penalties.

“They fought through adversity and came out on top. It’s been a long time,” Ottinger said.

Wasilla snapped Palmer’s five-game winning streak in the Potato Bowl, and the Warriors will be a home of the coveted Mayor’s Cup for the first time since 2014.

“It’s got Palmer everywhere,” Ottinger said of the plate on the Mayor’s Cup. “It only takes one time to change it.”

The Warriors swept their two chief rivals, Palmer and Colony, in 2014. But Wasilla had lost 11 straight to Colony and Palmer before snapping that skid Friday night.

“We talked about it tonight,” Ottinger said. “This program needs that marquee win. Marquee wins change programs, and this is a marquee win for us.”

Wasilla’s win was also the 12th in the 42-year-old Potato Bowl.

Wasilla quarterback and defensive back Gavin Harrington threw a pair of touchdown passes on offense and grabbed two interceptions on defense in the win. Harrington intercepted Palmer passes in the second and fourth quarters.

“That’s a huge game-changer,” Ottinger said of the interceptions.

Palmer forced four fumbles in the loss. Simmerman, Heal, Lucas Frank and Isaac Perkins each had a recovery.

“That kid has improved so much,” Ottinger said. “I couldn’t ask for that for a better kid. That’s just an unbelievable throw and catch.”

Engebretsen’s catch extended Wasilla’s lead to 20-7. But Palmer answered back. A play after Harrington grabbed his second interception, Perkins recovered a Wasilla fumble for the Moose. Five plays later, Simmerman connected with Hunter Hronkin on a 35-yard touchdown down the left side of the field.

“I thought we put it away, but I tip my cap to Palmer. What a scrappy, classy team. They fought hard and played hard,” Ottinger said. “They played classy too.”

Wasilla jumped out to an almost immediate lead. Lindquist was one of about four Warriors who notched a piece of a sack in the end zone to give Wasilla the quick 2-0 lead with the safety on the second play of the game. After the free kick, Wasilla pushed it’s lead to 8-0 with Phillip Bezhenar’s 7-yard touchdown catch.

In addition to his two touchdown passes, Harrington also rushed for a 2-yard score late in the third.

Palmer’s Elijah Barnes put the Moose on the scoreboard with a 18-yard touchdown catch early in the fourth quarter, In the last two weeks, Barnes has seven catches for 151 yards and four touchdowns.

Lindquist rushed for a game-high 101 yards rushing for the Warriors. Simmerman threw for a game-best 109 yards passing for the Moose.