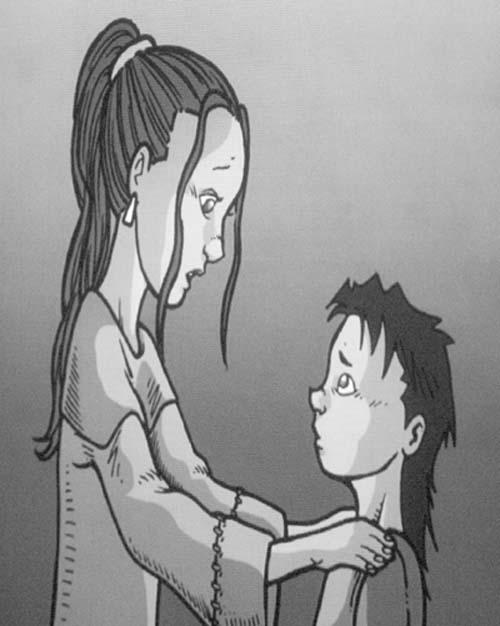 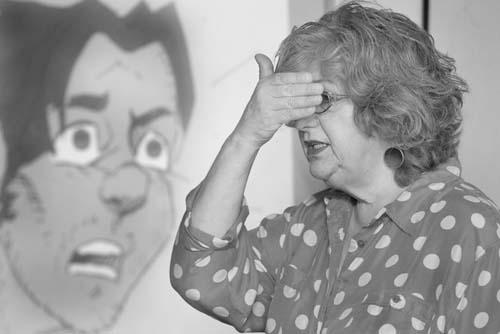 Patricia Wade covers her eyes as she tells a Ahtna legend to a group of 5th graders at Academy Charter School in Palmer Monday afternoon. (ROBERT DeBERRY/Frontiersman)

Patricia Wade covers her eyes as she tells a Ahtna legend to a group of 5th graders at Academy Charter School in Palmer Monday afternoon. (ROBERT DeBERRY/Frontiersman)

PALMER — For much of Katherine Wickersham Wade’s 86 years of life, she was the only person alive who remembered the Ya Ne Dah Ah stories her grandparents taught her when she was a child.

That was true until 1993, when she encouraged the Chickaloon Village to start the Ya Ne Dah Ah School. Her grandson, Dimi Macheras, was the tribal school’s first graduate.

But during the latter part of her life — she died March 23, 2009 — the Chickaloon matriarch shared these stories with the school’s students. Now her daughter, Patricia Wade, travels year-round to Alaska schools sharing with other students the ancient legends she helped her mother preserve.

In fact, the Ya Ne Dah Ah stories weren’t even written down anywhere until Wade and her son, Dimi Macheras, put them down on paper, illustrated and published them as a series of books, Wade said.

Now when she travels to Alaska schools as a storyteller, she shares these ancient legends mixed with Alaska history and her family’s personal story.

She told fifth-graders Monday at Academy Charter School in Palmer that the stories were used traditionally to educate Ahtna children and prepare them to survive in this rugged environment.

“These aren’t fairy tales,” Wade said. “They were told to keep our people alive.”

Unlike a decade ago, at least some of the students at Academy Charter already know these stories.

Wade used a PowerPoint presentation to show students illustrations from the book while she told the stories of “Woodt Nat Woosen,” “Besiin,” “The Ant Lady,” “the Grizzly Bear Story” and “The Magic House.”

“The Grizzly Bear Story — tell that one,” another student begged.

Even a few years ago, this conversation would have been impossible, Wade said, because no one knew these ancient stories passed orally from generation to generation.

“Now there are a lot of kids who’ve heard the stories,” she said. “They like to hear them again and again.”

Traditionally, each story was told to teach a different lesson, Wade said. “The Ant Lady” reminds people to treat others how you’d want to be treated. “The Grizzly Bear Story” teaches people to think before they act and always be prepared. Besiin teaches small children the importance of being quiet and doing as their parents tell them. And “The Magic House” is about good manners.

“Never go into someone’s house and help yourself, that’s stealing,” Wade said. “And don’t go in and say you are hungry, that’s rude.”

Real said Wade’s visit was part of an intensive unit on Alaska’s Native heritage. She said she is one of three teachers at the school who are teaching the unit that also includes information about Native Youth Olympics, beading, basket making, dancing and preparing Alaska Native foods, like fry bread and smoked salmon.

The unit culminates in a trip to the Alaska Native Heritage Center in Anchorage, Real said.

While Wade’s Ahtna ancestors have lived in this region of Alaska for thousands of years, Wade told students about the chapter in her family’s story that began in the early 1900s when the U.S. Navy issued contracts to began mining coal in the Chickaloon area in 1914.

At that time, a few hundred Ahtna people lived in the Chickaloon area. But with coal mining came the railroad and about 1,000 newcomers.

These were the days of Wade’s great-grandparents, Frank and Balasculia Nicolai. They had three daughters, Annie — Wade’s grandmother — and her sisters Olga and Mary, all born in the early 1900s.

Wade’s grandfather was Jesse Wickersham, who came to Alaska from Little Rock, Ark., as a wounded veteran. He was 38 years old when he spotted 14-year-old Annie in the woods, playing with her two sisters.

A moonshine maker and bootlegger, he took the child to be his wife. On Aug. 16, 1924, she was just 19 and pregnant with her fourth child. That was the day Wickersham decided to carry through on his drunken threat to wipe out his family, Wade said.

Wade said her grandmother had seven more children before she died at the age of 38.

The mine operation lasted just eight years — closing in 1922 — the same year Patricia Wade’s mother Katherine Wickersham Wade was born. By then, all but 40 Ahtna people had died, Wade said. Though some had moved away, she said most perished during a flu epidemic in 1918.

Wade began with the story of Woodt Nat Woosen. The young man wanted to marry the chief’s daughter, but the chief said he first had to prove he would be a good provider for her.

“You must work for our village for one year,” the chief said.

So Woodt Nat Woosen went to work. He hauled water, split wood and went hunting to provide meat for the village.

“But remember, animals are a gift from the creator,” Wade told students.

But before long, Woodt Nat Woosen started thinking to himself, “Boy, I’m a good hunter. I’m probably the best hunter there ever was.”

“He forgot he had some help from the creator,” Wade said. “He became very proud and very mean.”

One day when he went off to hunt he told his wife and son not to eat any of his meat.

But the boy was crying and hungry, and as the day dragged on became more and more hungry and pleaded with his mother for just a little piece of fat or something. She relented and cut a bit of fat from one of the strips of meat.

When Woodt Nat Woosen came home, he counted all the bits of meat and discovered the missing piece.

“Who ate this meat?” he demanded.

“But our little boy was hungry,” the child’s mother explained.

Enraged, he ordered his wife to go into the woods and bring back a stick with a hooked end.

When she returned, he bent back the child’s head and stuck the hooked end of the stick down his throat and hauled out the bit of fat from the child’s stomach, Wade said.

The next day, his wife and son were still hungry. But as Woodt Nat Woosen was leaving to hunt for the day, he repeated his command that no one touch his meat.

“That’s what you think,” his wife said to herself.

When he was gone, she took all the firewood and built a roaring fire. Then she took the best of the meat and put it in her food sack. What she and her son couldn’t eat or carry with her, she added to the fire.

And then mother and son headed back to the village. When they arrived and told the chief what Woodt Nat Woosen had done, he was furious.

“Big deal,” he said to himself. “I’m still the greatest hunter that ever was.”

He went out that day and the next and didn’t see any animals. Day after day, he didn’t see even animal tracks.

Soon he knew he was starving to death.

“Maybe they’ll forgive me if I go back to the village,” he said.

He was resting on a log on the outskirts of the village when he saw his son. He called to the boy, but his son didn’t recognize him.

He sent the boy back to the stranger and asked for proof.

The stranger took off the carved moose horn ring he received when he married the chief’s daughter and sent it back with the boy.

Recognizing the ring, the chief ordered two of his sons to take the man and the log he was sitting on and throw them in the dirtiest part of the dump.

What lesson does the story teach?

“Don’t be too proud,” one student said. “If someone is hungry, feed them,” another said. “Be good to your family,” said a third.

Check Out Our Product Portfolio