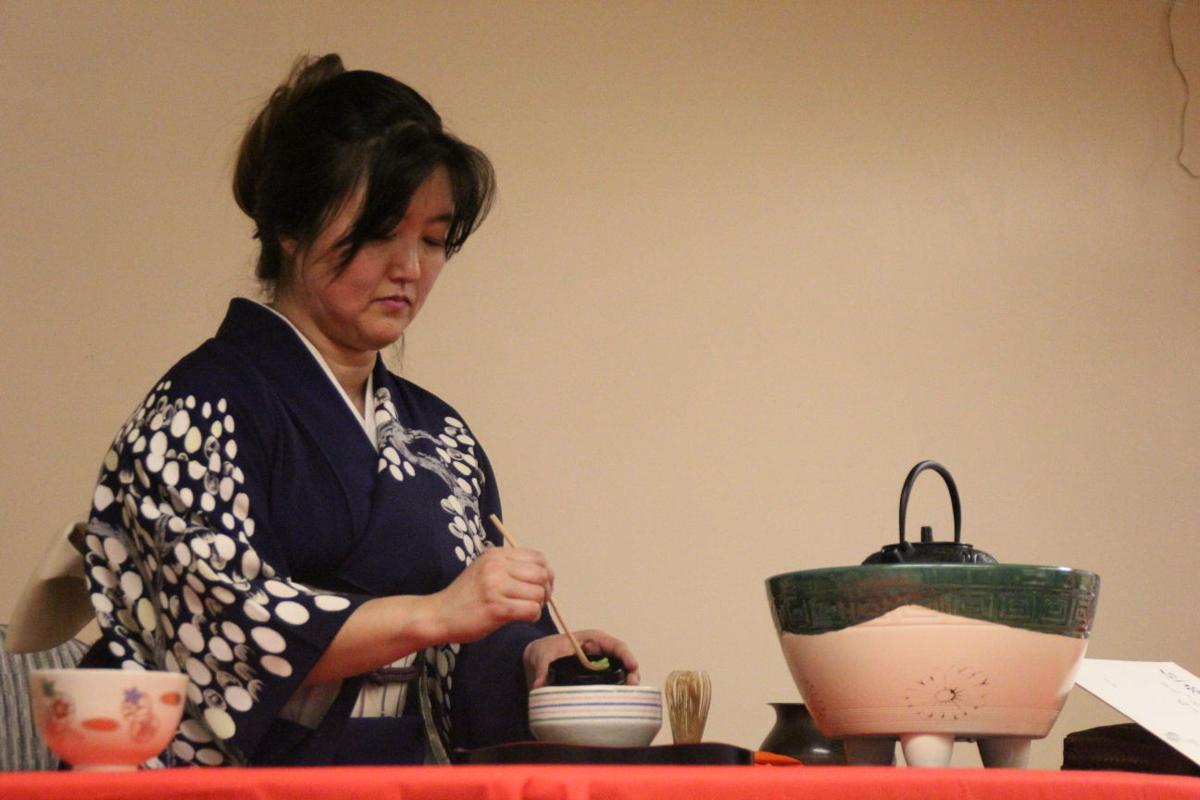 University of Alaska Anchorage professor Yuki Moore spoons powdered green tea into a bowl given to her by her grandmother during a tea ceremony demonstration at United Protestant Presbyterian Church in Palmer on Saturday afternoon for Palmer Saroma Kai's annual meeting. 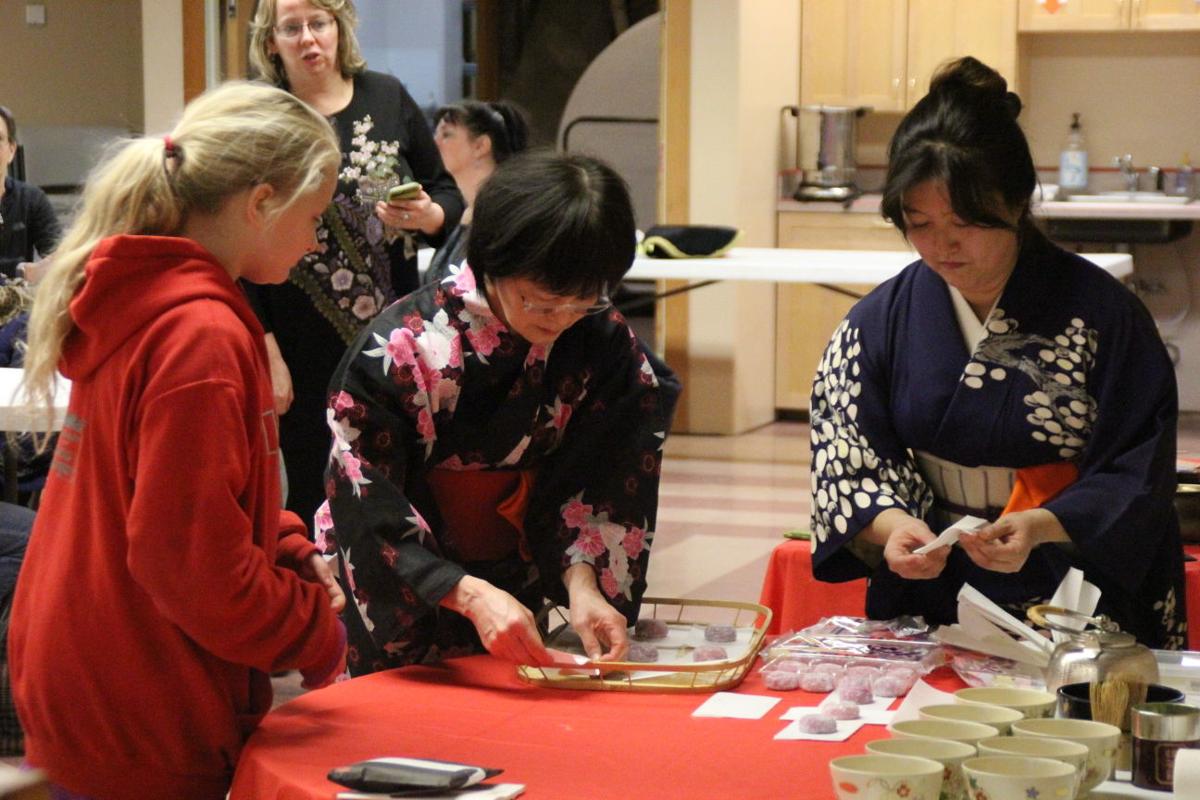 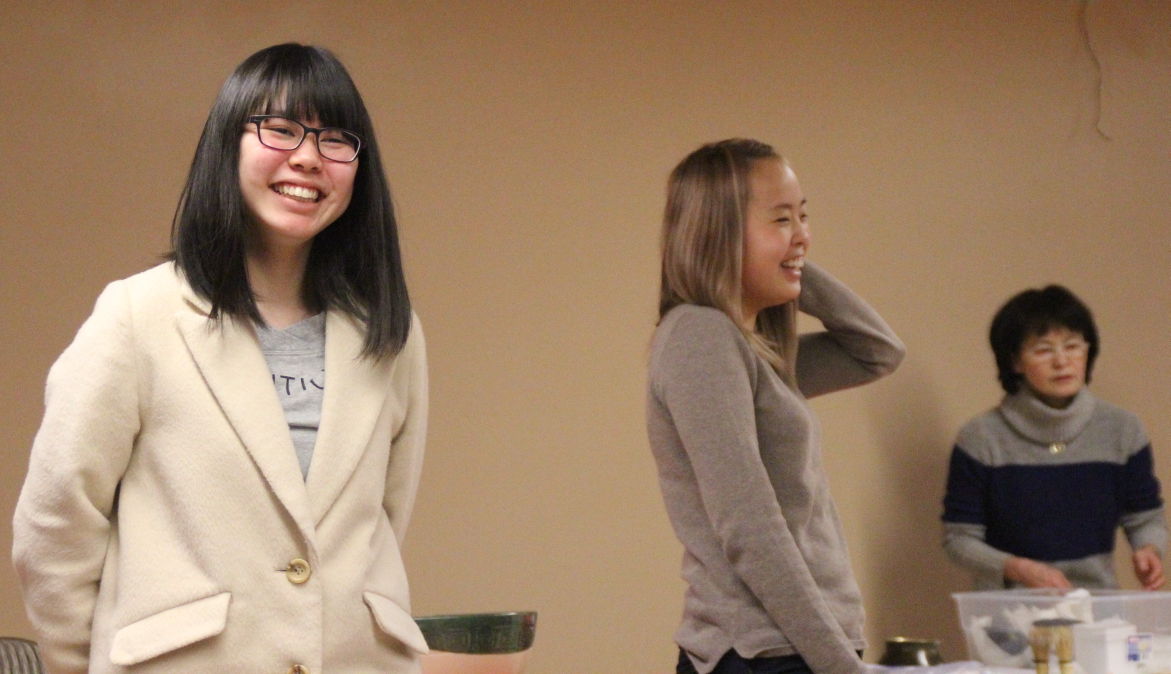 Exchange students from Takefu Higashi High School in Fukui, Japan laugh after playing janken (the Japanese equivalent of rock-paper-scissors) to see who introduces herself first at Palmer Saroma Kai's annual meeting on Saturday. Yui Kanaoka, left, is staying with the Wagle family, and Wakana Fujimoto is staying with the Kamilos family as they attend Wasilla High School this year. 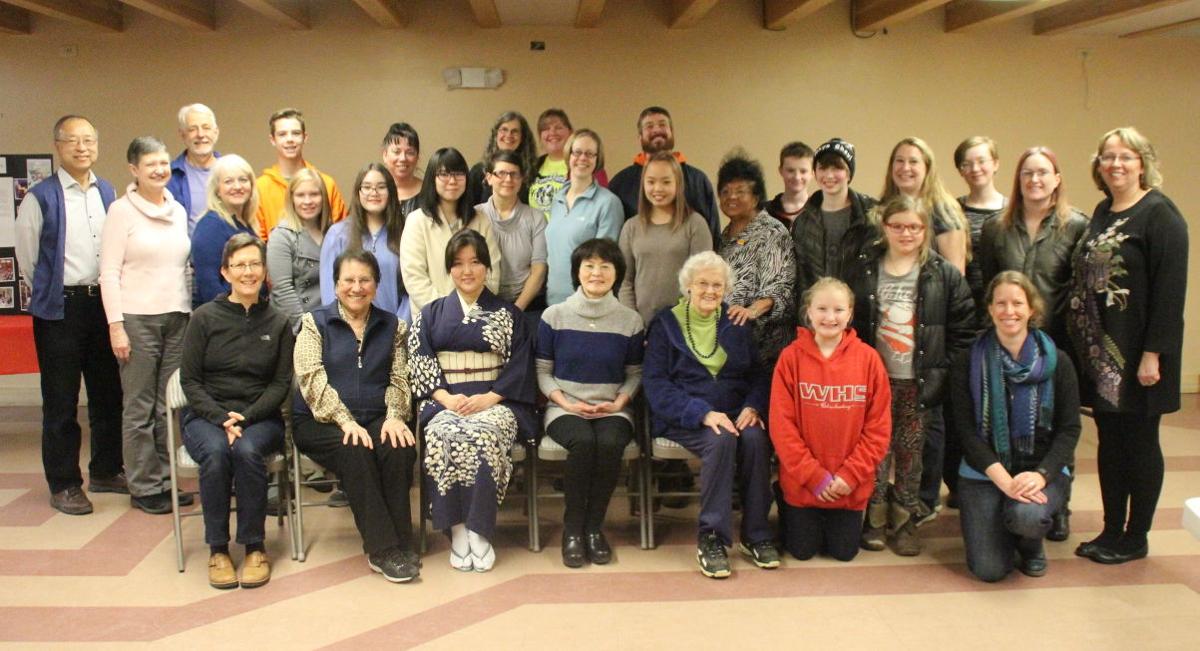 University of Alaska Anchorage professor Yuki Moore spoons powdered green tea into a bowl given to her by her grandmother during a tea ceremony demonstration at United Protestant Presbyterian Church in Palmer on Saturday afternoon for Palmer Saroma Kai's annual meeting.

Exchange students from Takefu Higashi High School in Fukui, Japan laugh after playing janken (the Japanese equivalent of rock-paper-scissors) to see who introduces herself first at Palmer Saroma Kai's annual meeting on Saturday. Yui Kanaoka, left, is staying with the Wagle family, and Wakana Fujimoto is staying with the Kamilos family as they attend Wasilla High School this year.

As part of the organization’s annual meeting, Palmer Saroma Kai hosted University of Alaska Anchorage (UAA) professors Hiroko Harada and Yuki Moore for a demonstration of the Omotesenke tea ceremony at the United Protestant Presbyterian Church in Palmer. The ceremony is a traditional Japanese art form sometimes referred to as the “Way of Tea,” a literal translation of the generic word used to describe all types of tea ceremony.

Though people can spend years studying the way of tea, it doesn’t take long for most to pick up the basics, Moore said. By the end of her semester-long classes at the university, most students can perform the necessary motions and tasks of the ceremony, she said.

Moore, who moved to Alaska 16 years ago, did not expect the ceremony to catch on with her American students when she first started teaching at UAA.

“I never thought people would be patient in tea ceremony … (but) everybody loved it,” she said.

Like any other art form or sport, the ceremony takes patience and practice. To become a master, one must learn how to properly whisk the powdered green tea leaves with the water, how to hold the mixing bowl and how to present the cup to the guest, among other things. A ceremony can last anywhere from 10 minutes — like the one demonstrated in Palmer on Saturday — to four hours, Moore said.

That may sound like a long time for anyone to sit still, but Moore said children learn the motions quickest.

“With younger kids it’s better because they’re just like sponges,” she said.

When asked about the purpose of the ceremony — aside from entertainment — Moore said it’s mostly about finding inner peace, even if only for an afternoon.

“People really need to relax these days, right?” she said.

And if the master or guest makes a mistake, it doesn’t ruin the event.

Several people in attendance at Saturday’s event had experienced some kind of Japanese tea ceremony, but it was a first for three Palmer students preparing for travel to Saroma, Hokkaido, Japan this summer.

Beginning in mid-June, eight students and two staff members from Palmer Junior Middle and Palmer High will spend two weeks in the northern seaside town, learning the language, customs and culture of the region. Each student will have a Japanese host family to stay the night with.

Seventh-grader Anesia Pavilla said she’s excited to meet new people and get over her fear of talking in front of large groups (like she did in introducing herself at the Saturday meeting) while in Japan. She became intrigued by the Japanese language, culture and people through anime and manga, or Japanese cartoons.

Her classmate, Tucker Christiansen, said he decided to apply for the exchange program because Japan “sounded really fun.”

Haley Hershman, a Palmer High junior, said she’s looking forward to the “life experiences” the trip is sure to bring.

Joining these three students will be middle-schoolers Lillian Bryan and Anika McDonough, along with high school students Connor Monroe, Hannah Villanueva and Tabitha Villanueva. Kim Akers and Elizabeth Crowley will serve as chaperones.

The exchange program started shortly after Palmer and Saroma were declared sister cities in 1980. Palmer Saroma Kai developed more recently as a volunteer organization to support the sister city relationship in whatever way possible. Last summer, the nonprofit was able to supplement city funding for the 35th anniversary celebration with thousands of dollars in membership dues.

For more information on the organization’s future meetings and events, search for “Palmer Saroma Kai” on Facebook and request to be added to the group. To submit content or subscribe to a print newsletter, contact Carla Swick at carlaswick2010@gmail.com or 907-775-0807.

MAT-SU — The Valley is ripe with opportunities to join an organization, explore the outdoors…