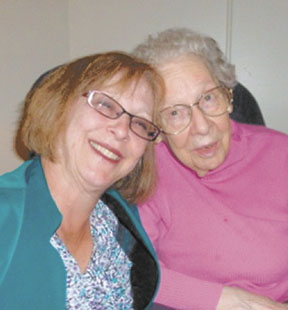 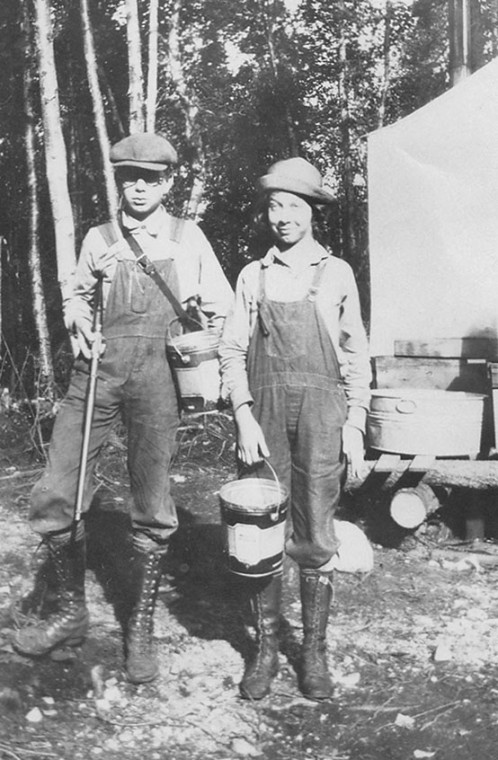 Clyde and June King in front of a canvas tent in 1932. 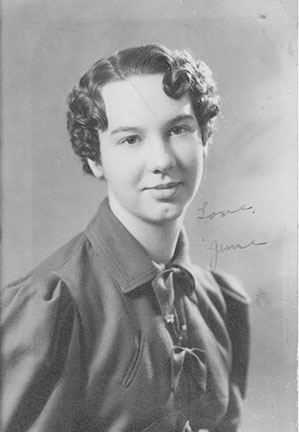 Clyde and June King in front of a canvas tent in 1932.

June Marie King Liebing, 91, was born into a family of adventurers on Aug. 3, 1921, in Ketchikan. Her parents, Emma and Clyde King, her older siblings Ara Belle, 3, and Clyde, 10 months, her Uncle Kent King, his wife Clara and son, John, 8 months, all set sail from Bellingham, Wash., to Alaska in 1919 in a 28-foot gas-motored purse seiner in convoy with five other small boats.

Settling in Craig, the boat was sold and a small store was purchased, which Clyde and Emma ran while Clyde also cut hair and worked as a deckhand.

Family concerns forced them to return to the northwest where Clyde worked in the lumber and then the furniture businesses. At one point, he fell ill, presumably victim of lead poisoning from the furniture plant, and fearing he’d never be able to work again, Emma prepared to support the family by updating her teaching certificate.

With Clyde little able to work, their savings were almost gone. Just before Thanksgiving, Clyde saw two big, white ducks coming toward him in the alleyway. He caught them, then learned they were escapees from a nearby slaughterhouse.

All their butchering completed, “They didn’t want to bother with just these two. What a nice Thanksgiving dinner they made!” says June Leibing in her memoir “Reminiscences of June Marie (King) Liebing: On Her Life in the Matanuska Valley of Alaska.”

When Col. Ohlson of the Alaska Railroad and M.D. Snodgrass of the Agricultural Department opened more land for homesteading in 1929 along the railroad’s service area, Clyde and Kent jumped at the opportunity to come to the Matanuska Valley. Kent came ahead in 1931, Clyde and family followed in April 1932. Kent homesteaded land on Anderson Lake. Clyde homesteaded the neighboring bucolic lake, which soon bore his name, “King’s Lake.”

“Our new home was on a beautiful lake surrounded by woods. It looked so big to me!,” Leibing says in the book. “There were loons, ducks and beavers, and about 500 billion mosquitoes. No one went outside without a wide-brimmed hat with a head net attached, long-sleeved shirt, heavy pants tucked into leather boots and gloves to protect us!”

It was all very raw. The “house” was a large canvas tent. Heating and cooking came from wood. Light came from Coleman lanterns. Running water? “My mother used to say, ‘Oh, yes, I have running water. I just keep the kids running to get it!’” she said.

Food was cooled by putting it in the lake, in the root cellar or in the basement of the house they were building.

“It was a seven-mile walk through the woods to play at the Corneliuses, the house of my nearest friend,” Leibing writes. “I only went once or twice a month because we were so busy. That was just the way life was, you did your chores before you went to have fun. (But when) we did, we played hard outside, and then walked those seven miles back home.”

They planned ahead and used what they could grow, preserve, gather or catch. Emma planted gardens wherever a tree had fallen, exposing the soil, Leibing said.

“Dad rented a patch of cleared land where we planted peas, carrots, cabbage, rutabagas, radishes, lettuce, turnips and potatoes,” she writes. “Other foods consisted of lots of salmon, eggs from our chickens, home-canned foods, milk products from the cow and vegetables as they ripened. We picked lots of berries: strawberries — fresh or preserved in layers of sugar in crocks or jam; currents — green in pies or ripe for canned juice and jelly; high bush cranberries for jelly and juice (mixed with Kool-Aid); low bush cranberries for sauce and jams as well as layered in sugar in crocks.”

In the evening, the family would play cards or board games. Weather granting, stories could be heard by shortwave. Anchorage’s radio station broadcast news and Bush messages. “We would read aloud,” she said. “There was no library, but mother had packed boxes of books: Dickens, Shakespeare, classics of the day.”

June completed several years at the Anderson School, a homestead three-quarters of a mile across the lake where Mrs. Anderson provided her attic for a one-room schoolhouse, plus board and room for the teacher. She attended Wasilla High School for three years before her father, newly hired by the Alaska Road Commission, moved the family to Palmer. June completed her senior year there in 1938. “I missed the lake, but it wasn’t a life-crushing thing. I was busy with school,” Liebing recalls in her book.

Clyde King, a man of deep principle, was unhappy with local lake properties rapidly anchored with drinking establishments. He donated 10 acres to a small independent group for an outdoor youth recreational center. King’s Lake Recreational Camp, organized as a nonprofit in 1938, was thereafter assumed by the Salvation Army.

“That suited me just fine because I knew they would run it under the same principles that my parents would want,” Liebing writes. “Now, they have nearly all the 160 acres surrounding the lake.

“The Colonists came in 1935 and mostly, I think, we welcomed them. We went down when they stepped off the train into all that mud. I remember thinking, ‘Oh! I’m so glad I have a house to go home to!’ That was not easy. I was 12 at the time; old enough to have a little empathy.”

June knew early she wanted to be a nurse. She studied at Seattle College and Providence Hospital (Seattle University), working five years as a nurse’s aid to pay for her training. She graduated as a registered nurse with a bachelor’s of science in nursing education.

“We moved the hospital to the school and several homes,” she said. “Sometimes, I delivered babies as both doctors were in surgery. I didn’t particularly like doing that, but I was able. I knew what to do.”

June married Bud Liebing, a local craftsman and gunsmith, in 1948. Soon her life was transformed with family, home and gardens. She has three children — Ruth, of Anchorage, Patti of Hawaii and Mike of Palmer.

Under the auspices of the Easter Seals organization, June instigated a training program of community nursing assistants. Her primary role was to visit homes throughout the borough to assess medical needs. She trained and assigned local home health aids to fulfill those needs (bathing, supervision of medications, mobility, etc.).

June maintains a keen wit and indomitable spirit. Her gratitude for life shines through — wheat and chaff together. Her daily walks at the Alaska Veterans and Pioneers Home in Palmer may be shortening, her senses and recall dimming, but she remains hardy. She reflects wit, faith and family fidelity in reliably saying, “I’m highly blessed, for I’m the daughter of a King!”

My thanks to June Liebing, her daughter Ruth Marchetti and Richard N. Estelle, who, with Ruth Hulbert in 2009, compiled “Reminiscences of June Marie (King) Liebing: On her life in the Matanuska Valley of Alaska.”

Barbara Hecker is a local writer and longtime teacher who writes Inky Visits, a regular history column for the Mat-Su Valley Frontiersman. Send suggestions for places, events and persons to visit and write about to InkyVisits@gmail.com.

Great story! June the is amazing. I love to read about living old folks, before the obituary.