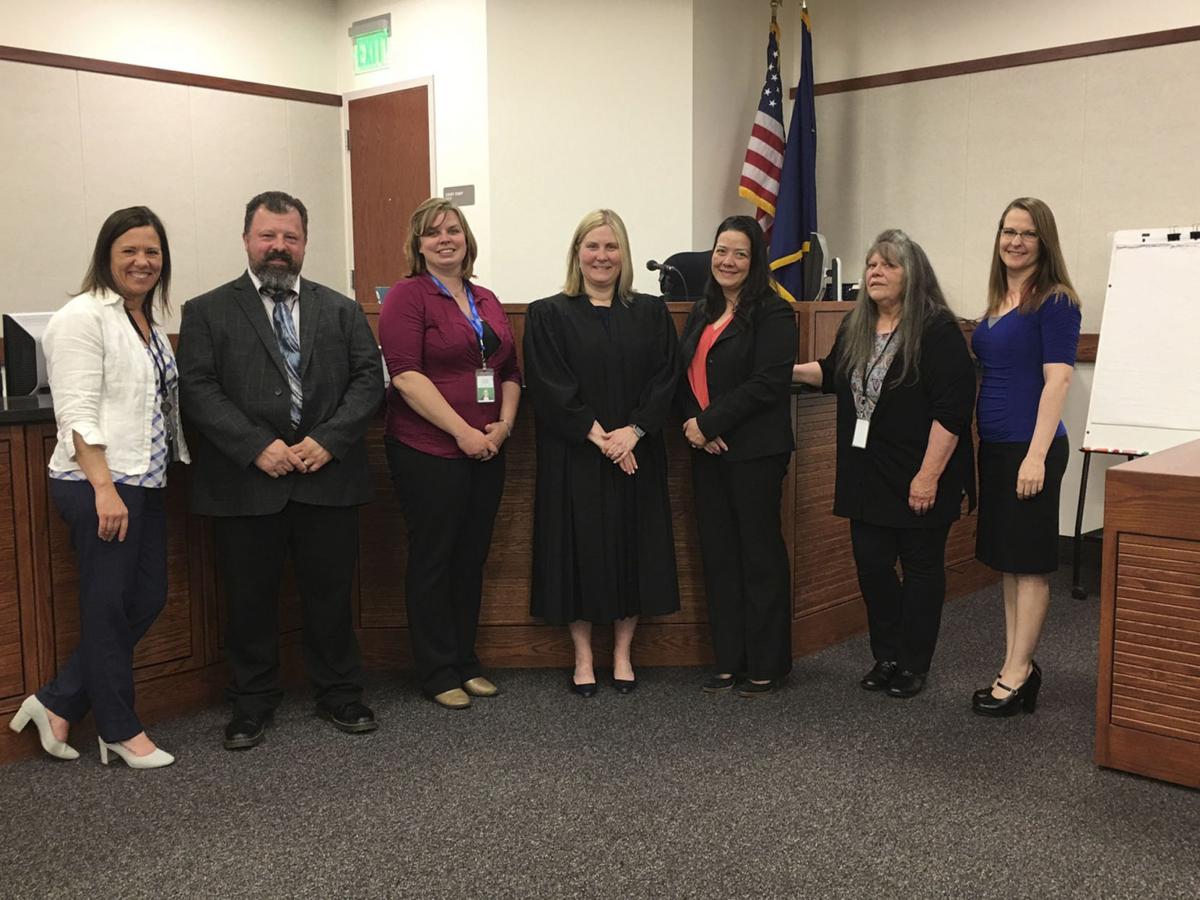 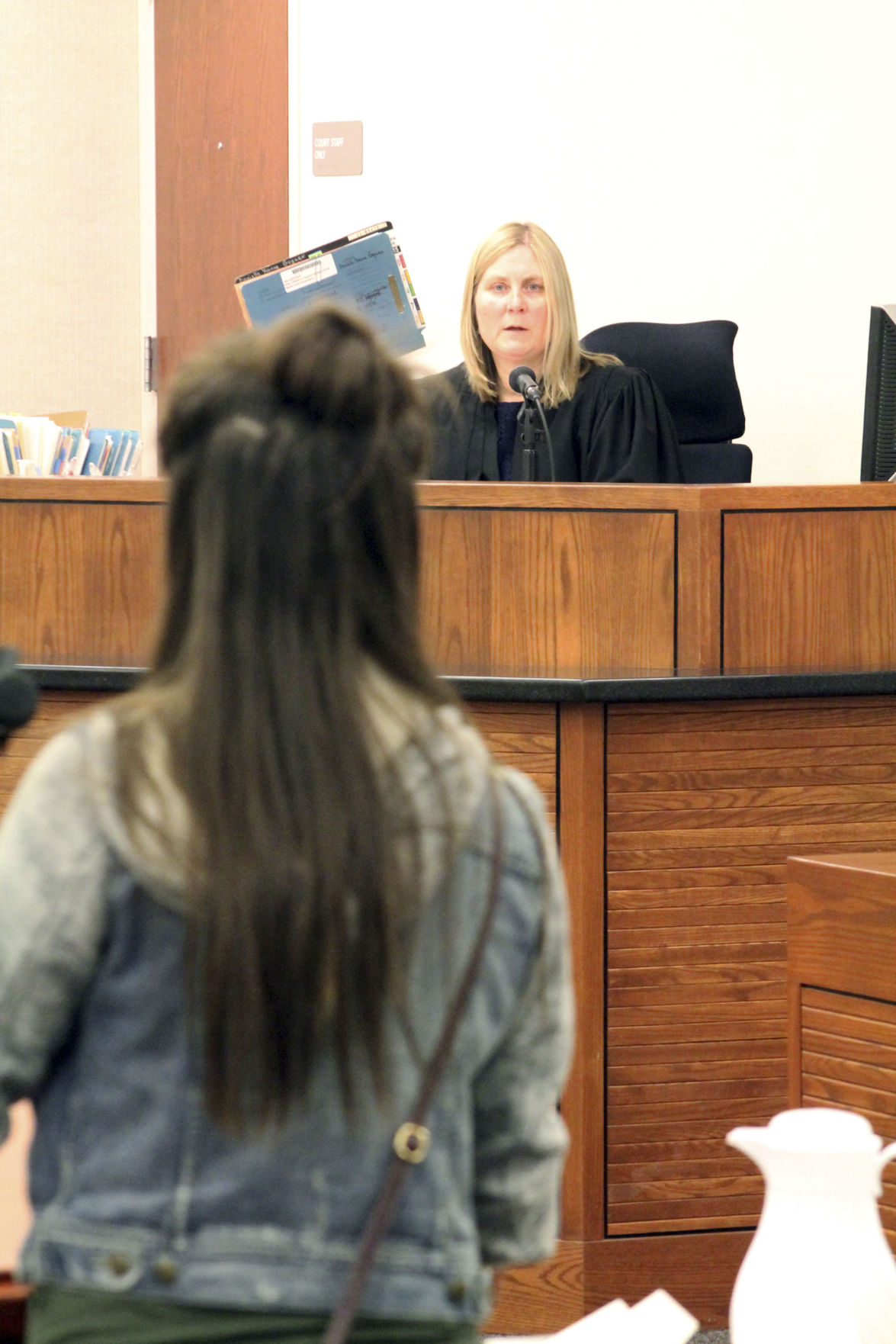 Palmer Drug Court Judge Kari Kristiansen addresses one of the court's participants in its weekly Thursday session. The newly-formed court is aimed at helping eligible individuals straighten out their lives and get them on solid footing to recovery. 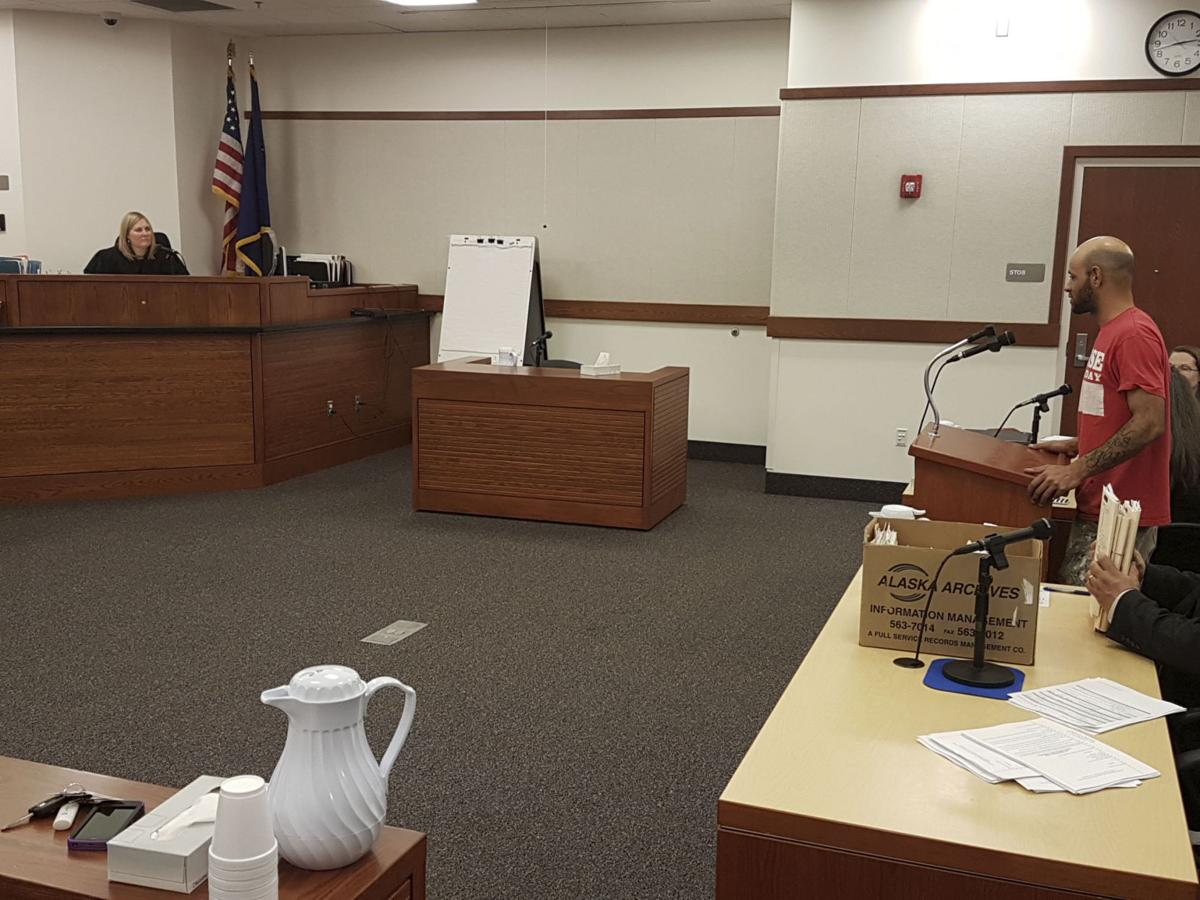 Palmer Drug Court participant Nicolai Bultron stands before Palmer Court Judge Kari Kristiansen . The court is held each Thursday and involves participants completing a 12-18 month regiment including counseling, holding a job or attending school, and of course, sobriety throughout.

Palmer Drug Court Judge Kari Kristiansen addresses one of the court's participants in its weekly Thursday session. The newly-formed court is aimed at helping eligible individuals straighten out their lives and get them on solid footing to recovery.

Palmer Drug Court participant Nicolai Bultron stands before Palmer Court Judge Kari Kristiansen . The court is held each Thursday and involves participants completing a 12-18 month regiment including counseling, holding a job or attending school, and of course, sobriety throughout.

PALMER — Through a concerted effort of individuals involved with the Alaska courts system, the Palmer Wellness Court (PWC) is the latest in the state formed to help felony defendants with a desire to overcome serious addiction problems—be they with drugs or alcohol.

The 12-to-18-month program not only helps those felons with serious addiction problems, it also serves as a jail diversion program while at the same time offering intensive substance abuse treatment and community supervision to support participants’ abstinence and recovery.

In addition to swift access to substance abuse assessments and treatment, and probable reduced jail times and fines, those completing the program may have the charges that brought them to court in the first place dismissed. Other benefits of wellness court include housing and job search assistance and eligibility for regaining a limited driver’s license. The public also benefits from safer roads and communities.

The first Alaska Court System “wellness court” was established in Anchorage in 1999 to deal with misdemeanor DUI offenders. Individuals were screened for eligibility for the 18-month program and voluntarily agreed to participate. The court was specifically called a “wellness court” to reflect the Alaska Native view of justice as a restorative process.

Therapeutic courts—often called “problem-solving courts” or “wellness courts”—have been a growing component of the U.S. court system since the 1990s. The National Drug Court Institute reported that in 2014 there were 4,368 problem-solving courts in the nation. Therapeutic courts differ from traditional courts in their holistic approach to offenders and to the underlying issues which bring these individuals into the justice system—most notably substance abuse and mental health. The Alaska Court System currently operates 14 therapeutic courts statewide with additional courts under consideration.

Of that total, five—Palmer, Anchorage, Juneau, Bethel and the Kenai—are aimed at general substance abuse including drug and alcohol. Three mental health courts are operated out of Palmer, Anchorage and Juneau. Three courts concerned with just DUI and alcohol-related cases are found in Anchorage, Fairbanks and Ketchikan. Anchorage has the sole drug-only wellness court, along with a specialty court aimed at helping veterans with both DUI and drug-related offenses. The state’s largest city also provides a specialized court—Child In Need of Aid (CINA) for parents or guardians of children in need of recovery services. The latest additions to the roster of therapeutic courts are a dual-jurisdiction state-tribal wellness court—the Kenai Henu’ Community Wellness Court—with cases presided over by both a state judge and a judge of the Kenaitze Tribal Court, and Palmer.

Kristin Hull, project manager for both the Palmer Mental Health Court and Wellness Court, and the wellness court coordinator, said the push to get a wellness court up and running in the Mat-Su has been ongoing since 2009.

“It’s been in the state for quite some time and it’s been an ongoing desire to have one here,” Hull said. She said those involved with the Palmer Court system, as well as some of its Superior Court judges were the main impetus for its development. “We’ve been getting support from all the agencies after seeing the success and positive things from Anchorage’s Wellness Court.”

The Palmer court is a cooperative effort of: Alaska Court System, Alaska Department of Law, Alaska Public Defender Agency, Alaska Department of Corrections, Alaska Division of Behavioral Health, Alaska State Troopers, and the community at large. Hull said in addition to the above agencies, Palmer is utilizing Set Free of Wasilla for its substance abuse treatment program, along with Fiend2Clean and Knik House for housing assistance when needed.

Hull said interest in bringing the newest court in the Mat-Su to fruition began in 2007 when the regular court and its partner agencies took the project under its wings and participated in training and education classes on the topic. Stakeholder meetings also took place. The process received funding from the National Highway Safety Agency the following year. However, Hull noted, not all partnering agencies felt there was enough financial support for them to participate in the project.  Without out that support, Hull said, the court could not be opened.

In 2009, those involved began looking at utilizing available funds to develop a therapeutic probation project Probation Accountability with Certain Enforcement (PACE).Hull said the program developed procedures for the swift, certain and parsimonious handling of probation violations. That court became part of the Palmer court system in 2010.

It took approximately five years, but in 2015, realizing the PACE program had made a notable dent in the recidivism rate, the need for a therapeutic (wellness) court was revisited. Again, Hull said, stakeholder meetings restarted with strong support from partner agencies. In April of last year, Palmer Court applied for a Bureau of Justice assistance grant which was awarded in September of 2016. The court organized and opened in March.

Hull said the court program utilizes a team concept. That team is made up of the judge — currently Palmer judges Kari Kristiansen and Gregory Heath — oversees cases with Judge David Zwink filling in as needed, as well as a state prosecutor, defense attorney, treatment provider, case manager/probation officer, and project manager. Hull said each team member supports and encourages participants while also holding them accountable.

Hull said entry to the court is not automatic, but rather based on state prosecutor approval and treatment assessment outcome. To be eligible, a defendant must have been charged with a felony drug or drug-related case, or felony DUI. Treatment assessment must stipulate a need for intensive outpatient substance abuse treatment.

Once approved, participants must meet a strenuous set of guidelines including intensive outpatient treatment and other services as recommended, attending recovery support groups such as Alcoholics Anonymous (AA) or Narcotics Anonymous (NA), attend regular compliance hearings before the wellness court judge, attend regularly scheduled meetings with their probation officers, be employed or attend school a minimum of 16 hours per week, undergo regular alcohol and/or drug testing, maintain sobriety, and pay associated fees.

Hull said program fees are based on a sliding scale depending on income. Participants may also incur fees for electronic monitoring such as a tether system. She said some financial assistance may be available.

Wellness court is scheduled each Thursday at 2:30 p.m. at the Palmer Courthouse and is open to the public. The courthouse is located at 435 South Denali Street. Anyone interested in observing court should call ahead to make sure court will be conducted as usual. For more information on the program, contact Hull at (907) 746-8142 or email her at khull@akcourts.us.

Read the eNewspaper, a digest edition of the newspaper