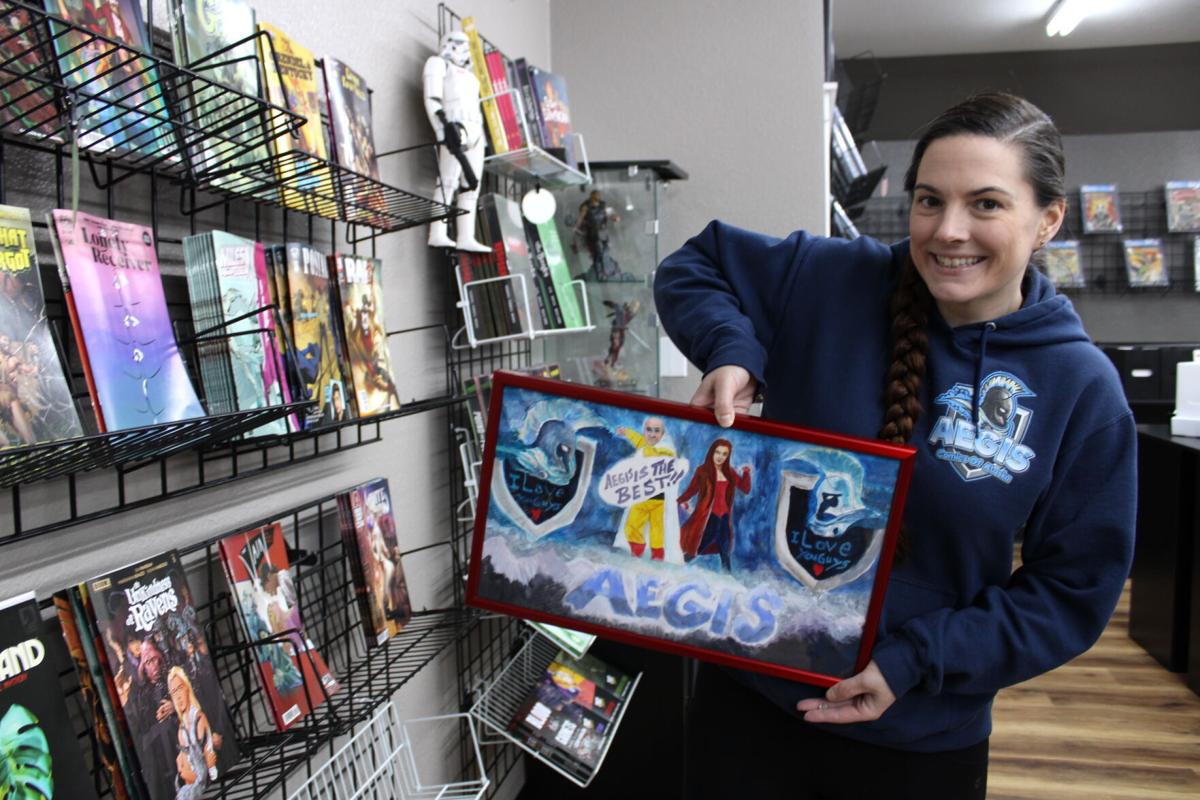 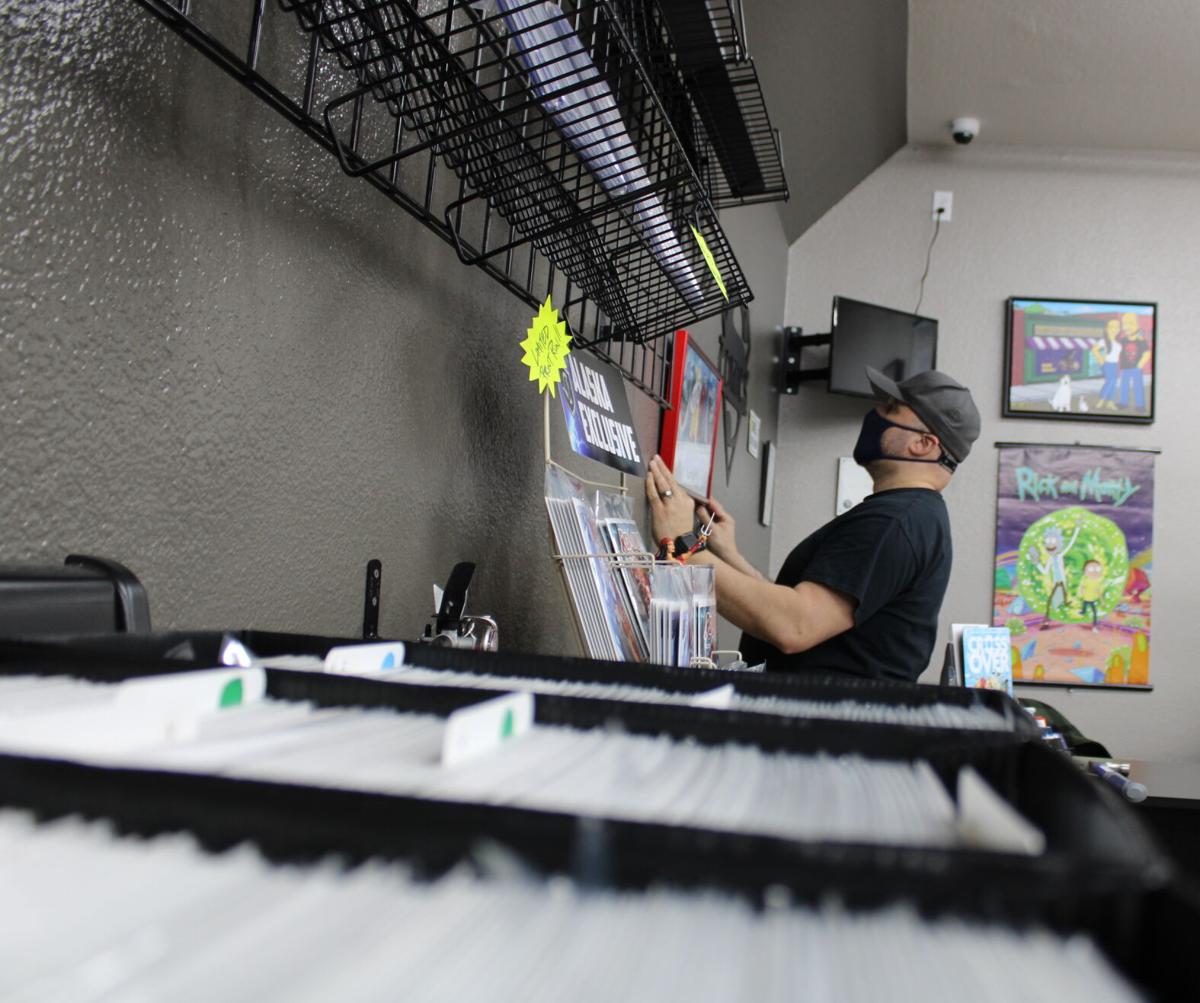 WASILLA — Aegis Comics soared up to new heights by moving downstairs at the base floor of the business plaza located at 500 East Swanson Avenue Saturday, Feb. 27.

The Greater Wasilla Chamber of Commerce joined owners, Luis and Amie Jo Nieves for a grand reopening ceremony complete with a ribbon cutting and dozens of guests from the community.

“This is the best ever. It showed how much investment the community has in it,” Luis said.

Amie said the grand reopening ceremony was packed with people, and they had customers coming through the door throughout the day. She said they saw a lot of new customers visiting from Anchorage and beyond.

“Saturday was a huge day. It was our biggest day yet,” Amie said.

The shop was closed for the three days leading up to the grand reopening. Amie said that it was a massive undertaking she’s happy to have over with. The new location allows for more space. It features an artist corner with local art hanging on the walls, and there’s even a secret entrance disguised as a bookshelf that opens to the backroom.

“It was a mad dash of crazy,” Amie said. “It ends up being pretty darn awesome... I don’t miss those stairs at all.”

Amie and Luis have been working to move their comic shop to a ground level location since they opened. When the medical clinic at the base level of the plaza closed down, and their moving funds reached the adequate level, they made the move.

The ground level location finally allowed Amie and Lu to realize an important goal, welcoming a very special and long awaited guest into their shop for the first time, Austin Ervin, the namesake of Austin’s Compassion Exchange run by his mother Tina Ervin.

Austin is a die hard comic book fan with an impressive and ever growing collection growing in home. Up until this point, Austin was unable to physically enter the shop due to the lack of a wheelchair accessible entry. Up until this point, Tina would Facetime her son to show him the selection of comics to choose from.

Many Valley residents will likely recognize Austin’s iconic Spidey Bus, a vessel for his love for comic books. The bus recently underwent a makeover and turned into the Deadpool Bus. Amie and Luis said that seeing Austin’s bus pull into the parking lot was one of the best moments of their lives. He was the first person to visit the new shop, receiving a designated tour and a bundle of Deadpool comics. He was also right there when they cut the ceremonial ribbon.

“We had Austin come in before anyone else, and we gave him kind of a VIP tour, and he lit up like the Fourth of July, which made my heart just explode,” Amie said.

Austin brought Amie and Luis a picture that he designed, depicting the comic book couple as One Punch Man and Scarlet Witch along with a letter expressing how much the local comic shop has meant to him despite the fact he hasn’t been able to see them face to face until now. The experience left Amie in tears and Luis without words to express how much this milestone meant to them.

“This kid is just pure positivity… If nothing else the look on Austin’s face was worth every dime it took to get down here,” Amie said.

Luis said that Austin was made the “honorary assistant manager” of the shop, and become a regular guest on their Youtube channel, helping with skits, interviews, and other videos. During a fundraising video, Austin donated $100 to help keep the shop going. He said, “I had to. You’re my favorite comic shop in the whole world.”

“That’s why we have the shop. It’s for that… The shop is for the community. That’s what the shop was built for,” Luis said.

Amie said that 2020 was a rough year for any small business, and they weren’t spared from the COVID-19 challenges.

“There were a couple of times we really thought we weren’t gonna make it,” Amie said.

Luis said that support from the City of Wasilla greatly aided their efforts navigating through the pandemic.

“They’re very proactive... The City of Wasilla made it very easy for us… When we needed help, it was the City and Chamber of Commerce... going all out to help businesses like ours be a success,” Luis said.

According to Luis, there’s over 100 customers on their pull list, which is on par with similar shops in the Lower 48. He noted that they have numerous out of state customers and they’re the only Alaskan comic book that ships out of state. He said the customers have been their greatest ally in their adaptive aspirations to maintain their presence in the community.

“We’re only here because of the support of our customers,” Luis said.

Luis and Amie’s children flew up to help them move the shop downstairs. Luis noted that some of their longtime customers even pitched in, making the quick move possible. He said he was humbled to see their immediate family working alongside their budding family growing from the community.

Luis said that he signed a five year lease and he’s feeling confident for the future.

“We believe in how the industry’s going right now, and how people in Alaska are responding to it,” Luis said.

Aegic Comics is holding a special giveaway for a signed copy of the new Keanu Reeves and Matt Kindt comic book, “BRZRKR” set to launch this Wednesday.