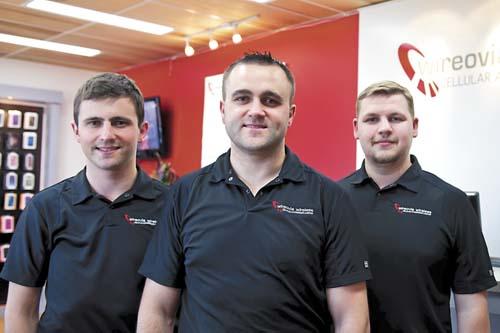 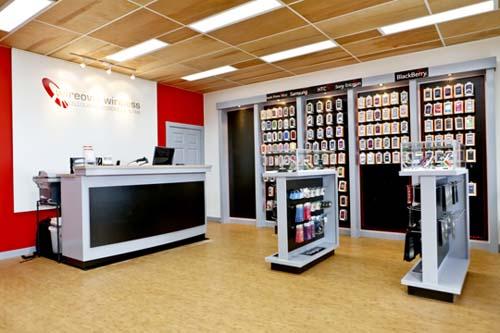 The inside of the new Wireovia Wireless store in Wasilla has a high tech and clean look. (Photo courtesy Igor Galakhov)

The inside of the new Wireovia Wireless store in Wasilla has a high tech and clean look. (Photo courtesy Igor Galakhov)

WASILLA — Dmitry Kudryn and his younger brother Vitaly were only small children when they emigrated to America with their parents and siblings from Ukraine in 1989.

Today, after moving with the family to Wasilla from Washington state in 1999, they are continuing their parents’ legacy of chasing the American dream by launching another entrepreneurial venture here.

As a former commercial pilot who also helped open and run the local Italian ice cream store Gelato Kudrino, Dmitry approached Vitaly, a real estate appraiser, about a year ago about opening a cellular accessory and repair store — a one-stop shop in Wasilla no one else was offering.

“The wireless industry was a really good solution for me to overcome the instability that comes with the airlines,” the eldest of 12 siblings said Friday, two weeks after opening Wireovia Wireless in Fishhook Plaza just north of Wasilla High off Wasilla-Fishhook Road. “I knew Wasilla needed something like this. People want to be able to keep their phones, iPods, and iPads for a long time, so we help them do that by offering a repair service at a good rate. But we also sell accessories, like protective cases and other devices, at a lower rate than our competitors.”

He said he and Vitaly invited a third man, Igor Galakhov, to partner with them. As the owner of the mobile computer repair business Alpha Computer Services, Galakhov was a critical piece to their ability to offer repair services, he said.

“Igor’s experienced and a certified repairman, so he brings a lot to the business,” said Dmitry, a father of two who turns 26 soon.

He said the response from the community has been even better than expected since they opened March 30. Perhaps their offer of a protective case for only $1.99 and a free screen protector with a purchase is one motivating factor, he said.

“A lot of people have come in and been able to either find a product they need for a good price or asked us to repair a device for them,” he said. “We’ve been very pleased.”

Dmitry said the most common repair issues they see involve broken screens, broken charging ports, stuck buttons, cameras on the fritz and software glitches. Anything related to the functionality of the device is usually reparable, he said, which can save people hundreds of dollars by preventing them from having to buy a new device.

“We can pretty much fix any cellphone or iPod, unless it’s had water damage and wasn’t brought in quickly enough,” he said. “We’ll be able to tell them if it’s economical to get the phone fixed or just buy a new one. We’re on the customer’s side, either way. We want them to be happy so that they’ll come back.”

Raised by hard-working parents — their father was a coalminer and their mother a nurse — in a “typical Ukrainian city” before landing in the Northwest United States and doing whatever it took to keep the family fed, the Kudryns are anything but slackers.

Vitaly still holds his real estate license and thought he’d continue to dabble in that for a while, but he’s realizing the new business will take his full attention. He said he was surprised by how quickly Wireovia Wireless got off the ground.

But he said he’s enjoying working with Dmitry and feels each partner brings something important to the mix.

Both brothers think nothing of working from early morning to late at night to get things done.

“Sometimes I find myself sitting at my desk at midnight and think nothing of it,” Dmitry said. “Our parents raised us to get out there and find our thing, our avenue and to make sure it’s the absolute best we can do. That’s been our motivation and passion. We know it’s a risk, but you can’t be successful without taking some risks.”

Wireovia Wireless is on Facebook and the store can be reached at 357-0060.

They dont provide repairs however.

The Valley has had a one stop shop for cell phone and iPod accessories for almost three years it's called For My Cell on Knik Goose bay Rd which just happens to be right across from the Gelato location..... Hmmmm coincidence??? I love their great selection and helpful employees!

Keep it up! We need more of the little guys putting pressure on the big box stores.