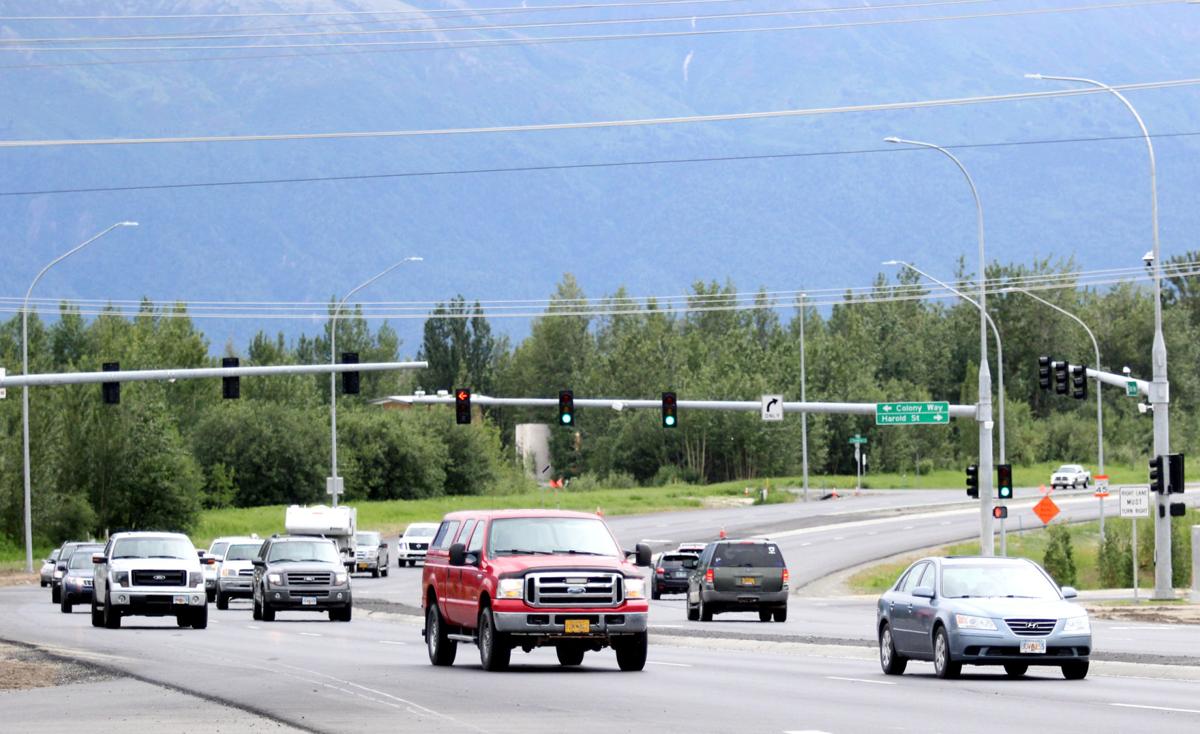 Phase 1 of the Glenn Highway widening project from milepost 34 to 42 will be completed by August.

The Glenn Highway project included a new turn lane at the intersection with the Palmer-Wasilla Highway.

Phase 1 of the Glenn Highway widening project from milepost 34 to 42 will be completed by August.

The Glenn Highway project included a new turn lane at the intersection with the Palmer-Wasilla Highway.

PALMER — The commuters of Palmer have long awaited improvements to the Glenn Highway, and Phase 1 of the widening project from milepost 34 to 42 will be completed by August, according to Project Engineer Todd Smith. Phase 2 of the project will begin next year and stretch from Outer Springer Loop to the interchange of the Glenn and Parks Highways.

The top lift of pavement has been resurfaced from Bailey hill below Scott Road to East Outer Springer Loop. Paving has been completed on the new frontage road that runs alongside the Glenn Highway and Smith said that the final paving projects along the Phase 1 portion of the Glenn widening project is to tie in remaining driveways with the new frontage road. Smith estimated that only three to four more nights of paving will need to be completed.

“The day shift will really be isolated to landscaping, general cleanup. We’ve got some topsoil and seeding but those activities typically have a very minor to no impact to the traveling public,” said Smith. “The real message to the traveling public is they have endured the worst of it and we’re on track to be mostly complete by the end of July.”

Adjacent to the Glenn Highway, the intersection of Cobb Street and Evergreen Avenue has changed both for pedestrian travelers and vehicles.

The raised middle of the intersection allows for greater safety and ease of access for pedestrians.

“When you walk up to that intersection it’s flat and as the main intersection in down town it promotes the walking pedestrian traffic,” said Smith.

Smith said that along with landscaping projects, topsoil and seeding along new roads, the end of Phase 1 will finish with in-laid striping. Smith wants to alert travelers to follow guidance from flaggers as the methyl methacrylate in-laid paint being used does not dry as quickly as maintenance paint, but can take up to 45 minutes before fully dry. Smith estimated that 50 employees are currently working on the street level of the Glenn widening project. Along with the raised median in front of City Hall, new pedestrian islands are featured at the intersection of the Glenn Highway and the Palmer-Wasilla Highway.

Paving will continue at night until the project is complete at the end of July. For more information, visit https://alaskanavigator.org/projects/5-glenn-highway-mp-38-43-south-inner-springer-loop-west-arctic-avenue.Phase 2 of the project will begin next year and stretch from Outer Springer Loop to the interchange of the Glenn and Parks Highways.