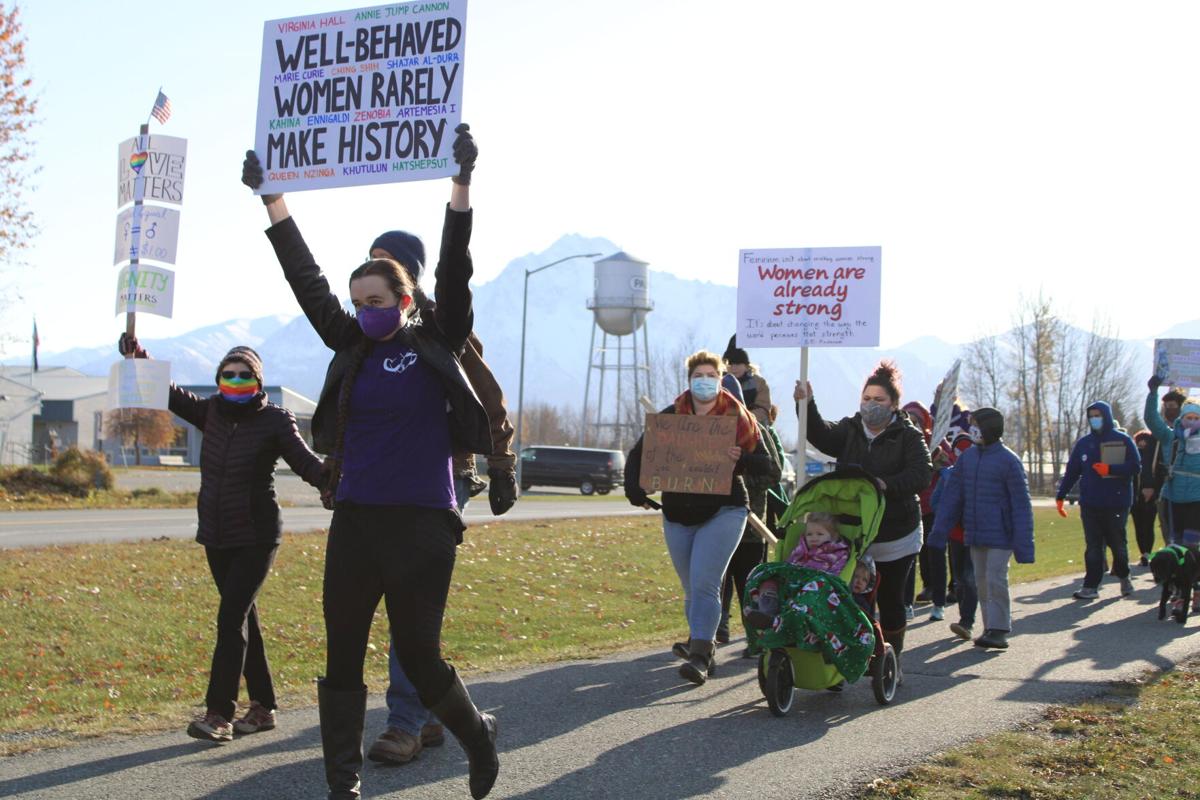 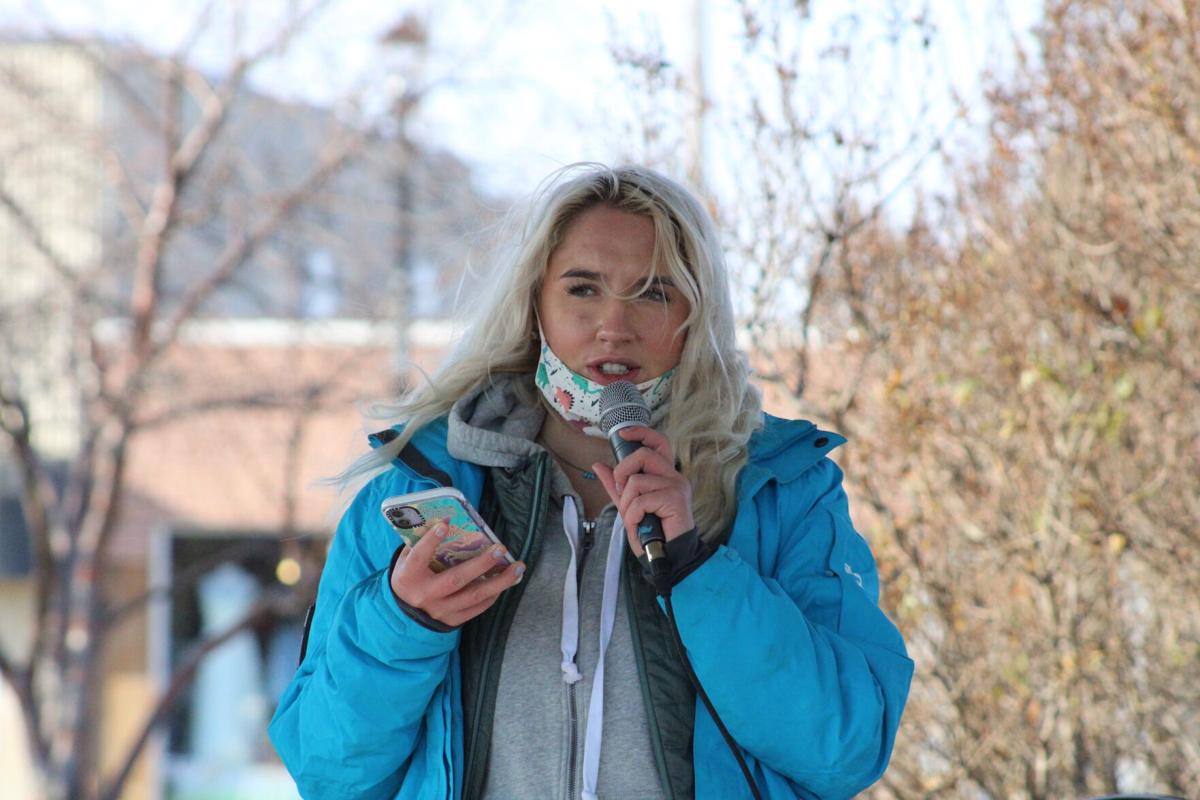 Aurora Till speaks during the Palmer March for Justice Saturday in Palmer. 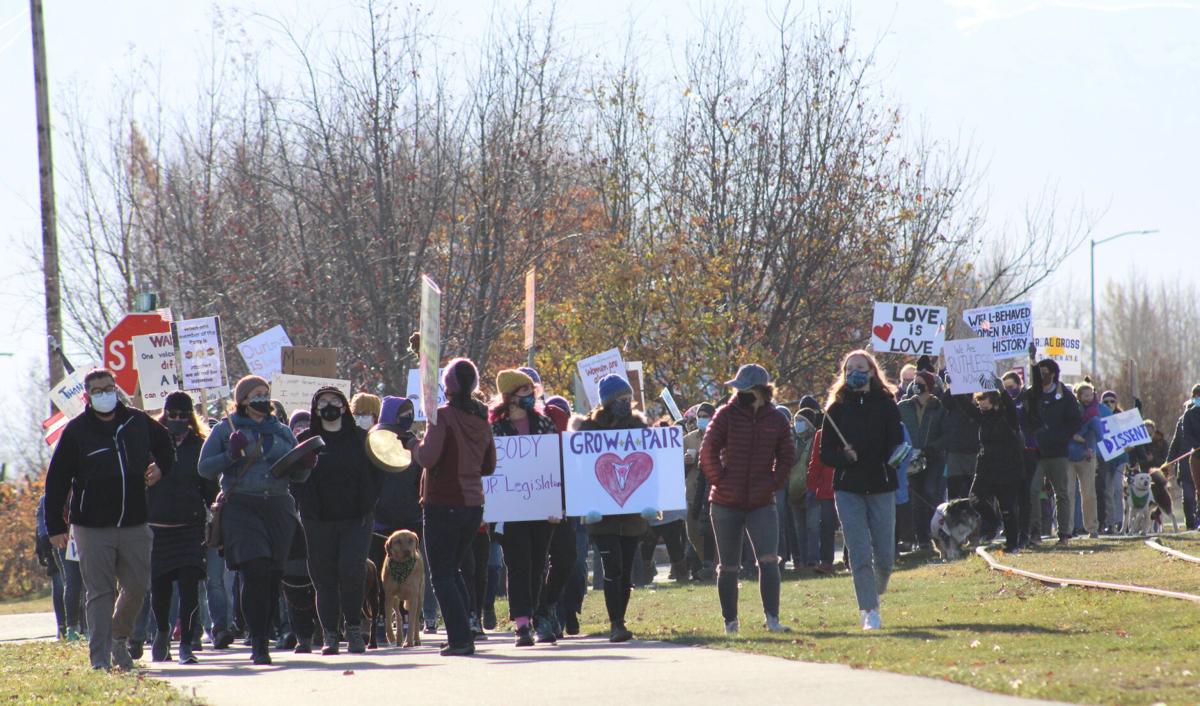 Hundreds participated in the Palmer March for Justice. 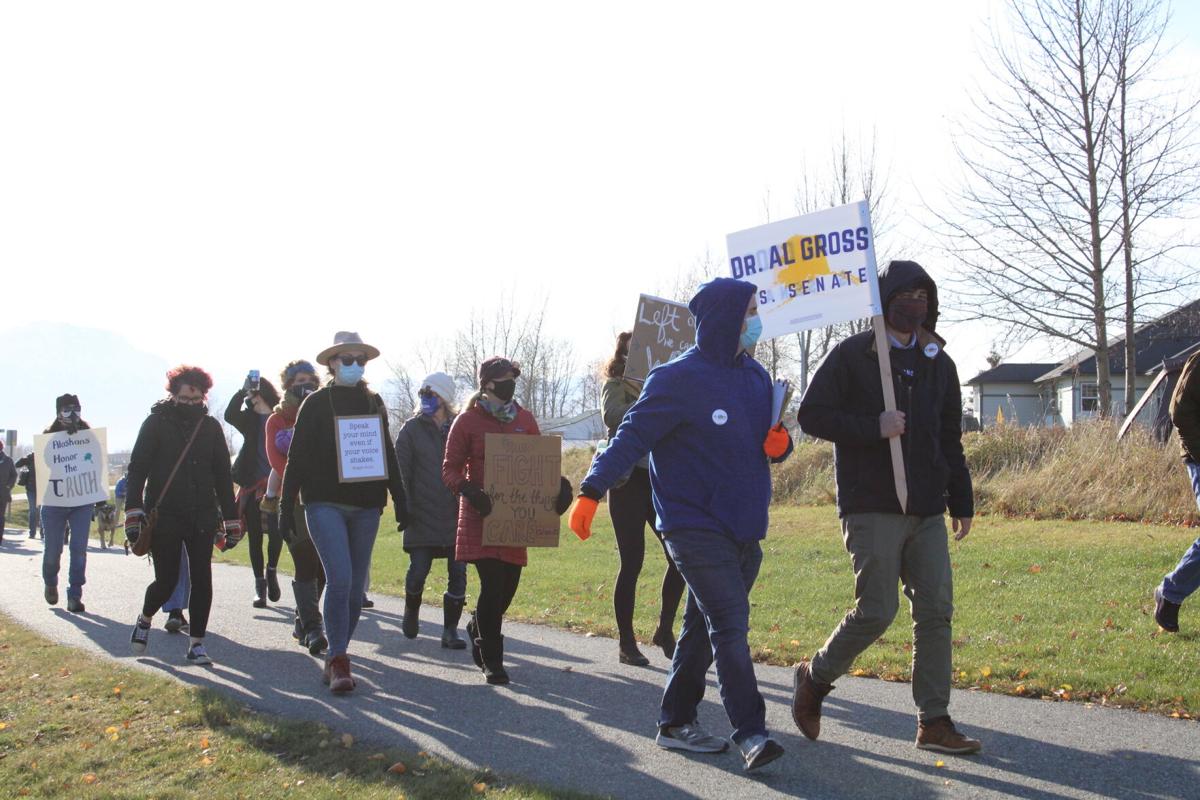 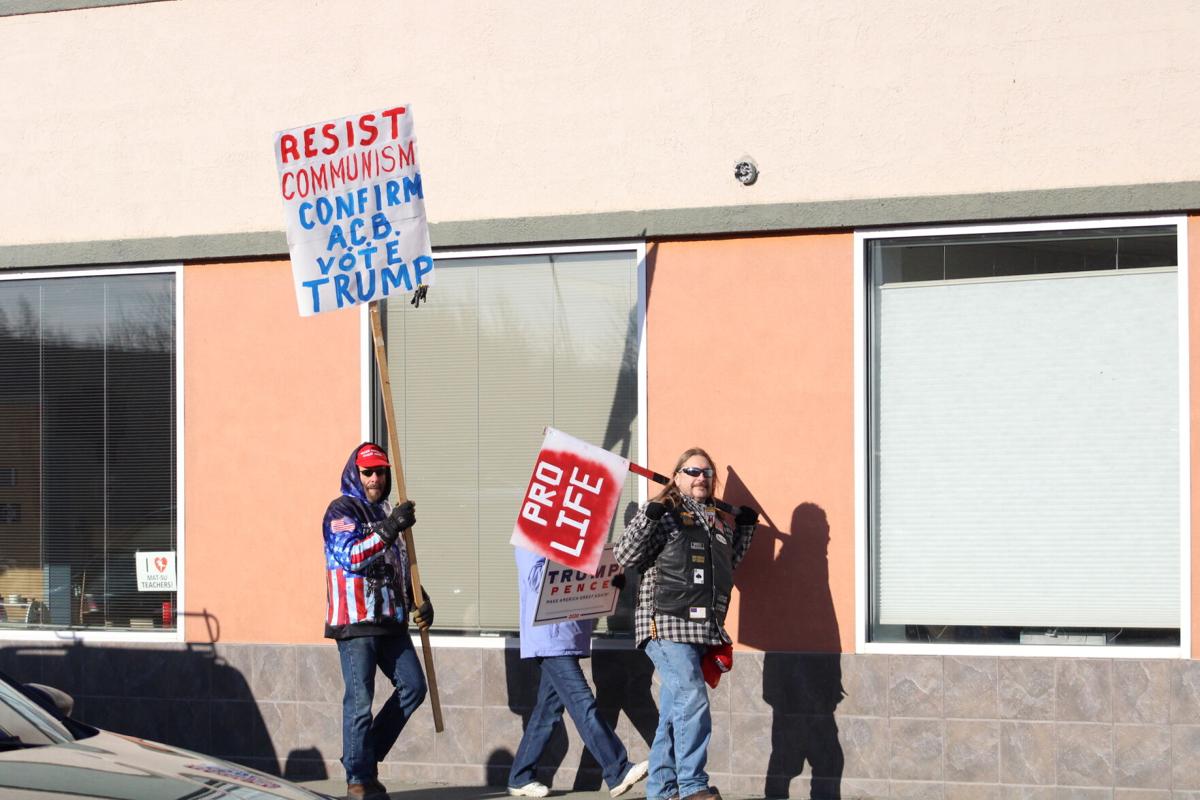 Aurora Till speaks during the Palmer March for Justice Saturday in Palmer.

Hundreds participated in the Palmer March for Justice.

PALMER — Hundreds gathered in the pavilion in downtown Palmer to participate in the Palmer March for Justice organized by a group of local mothers who decided to take action.

At 1 p.m. on Saturday, groups of women wearing masks and dissent collars chanted, listened to one another and marched through downtown Palmer asking for equal rights for all citizens of the United States.

“I have no voting power in this upcoming election, yet my rights are on the front lines of the presidential debates. I’m calling to all eligible voters to vote with the interest of all children in mind. If we as a nation support equal protection then it is your duty to vote for the most equal future,” said 17-year-old Annika Gagnon. “The message is that here is a lot of fear right now for marginalized communities without the support of Ginsberg and a lot of human rights are up in the air and up for debate rn and that the people who those policies affect are scared and they’re angry and they’re actionable and we’re not going to be silenced and we definitely won’t be silenced if Amy Coney Barrett does get the appointment.”

A group that included House District 11 candidate Andrea Hackbarth, Janel Gagnon and Meggie Aube-Trammel organized a group on Facebook called Mat-Su Mom’s for Social Justice that hosted the event. Nearly an hour of speeches took place under the pavilion before a group of hundreds of mask-wearing supporters. Across Valley Way in the parking lot of the library, a group of cars listened to the event that was streamed by Radio Free Palmer.

“We organized primarily through grass roots at first on our facebook group Mat-Su Moms for Social Justice. We are a group of Mat-Su residents, mostly moms who desire a more just and equitable community. One of the goals of the rally today is to send a clear message to our Senators and our Representative that we are watching them and we don’t want them to rush the decision to fill the Supreme Court seat,” said Aube-Trammell. “I am part of this amazing community. Just because we may think differently and hold different opinions, we are not outsiders. We are Alaskans and we are Americans.”

At 1 p.m. as the event started at the pavilion, just over a dozen in a separate rally were positioned across town at the corner of the Palmer-Wasilla Highway and the Glenn Highway. Following speeches by Mat-Su Mom’s, a group of young women and other distinguished speakers, the march began north up Valley Way at 2 p.m. where they met by large convoy of trucks displaying Trump flags and honking their horns drove by.

“I had no idea this was going on,” said Kerby Coman.

Coman said that he started a Facebook post encouraging Trump supporters to rally in their vehicles and was unaware of the Palmer March for Justice.

Organizer of the Palmer March for Justice conveyed a contradictory message during their speeches. Speakers argued that an appointment of Amy Coney Barrett to the Supreme Court during an election year is unjust. Trammell quoted Sen. Dan Sullivan during an Obama era confirmation stating as much. Hackbarth spoke about the problem of homelessness during her time with the microphone in a moving poem called America the Beautiful.

“The big motivation obviously was the Supreme Court seat being empty and just being able to show our community that we have people that care about those issues and that issues like that on a national scale affect Palmer, they affect justice in our town, the decisions that are made by that court affect us,” said Hackbarth. “I think getting people out and showing the rest of the community that people care about a certain thing can actually get other people involved, make certain decisions to vote. I think that the city council election is one piece of evidence that things are changing.”

The train of nearly a dozen vehicles in the separate rally circled the group, spinning tires and honking horns. Maddison Simpson sat in a parked truck along Valley Way after the protest. Simpson said she was motivated by supporting the president.

“To stand up for our president pretty much, show that we’ll be voting for him. We would like other people to vote for him for all that he has done that’s been hidden behind the news that they’re not reporting. Fake news all over the place,” said Simpson. “Freedom to encourage people to dig into what’s really going on, maybe question why are all these people out here with Trump even though the media tries to hide that.”

Much of the discussion during the speeches under the pavilion centered around discrimination in education and called for education reform to restore equity. As a teacher in the Mat-Su Borough School District for 25 years and former MSBSD Superintendent, Pat Chesbro said that teachers are also a product of a flawed school system.

One of Chesbro’s former students was Lisa Wade, who now serves as a director of education, health and human services for the Chickaloon tribe. Wade spoke about missing and murdered indigenous women and spoke about the fear she experiences for her young indigenous daughter.

“Justice isn’t equal for all. Safety isn’t here for all, and that should be enough. I want you to march today to oppose what’s going on with Amy Coney Barrett,” said Wade. “You all that are here are here because you’re supposed to be here today. You’re here to light the fire for our community so that we can do better, we can be better, we can be safer for all, we can create equity for all, justice for all. That’s why we’re here today, don’t forget it.”

Recent 2020 graduate of Palmer High School and organizer of the June protest in Palmer Aurora Till spoke about her opposition to the Pebble Mine as a lifelong Palmer resident who subsistence fishes in Bristol Bay each summer with her family. After Alaska State Director for Planned Parenthood Votes Jessica Cler spoke about the importance of voting, three young women spoke about their concern with the supreme court nomination.

“If you have kids growing up fearing for their lives, that’s pretty damning of oru current lawmaking,” said Clara. “Our generation is acutely aware of these things and very afraid and very angry that nothing is really being done about these things.”

Spirits of those who joined in the Palmer March for Justice were not dampened by the disruption from those who chose to more loudly convey their message. A charity organization called the Queen’s Guard provided 10 members who act as protectors to queer and trans people during protests with the potential for violence.

“It feels to me like they feel threatened and feel the need to put on this great show of force and I can respect their right to support their opinion, however they want but you know they seem threatened to me,” said Hackbarth.

No physical altercations took place during the event, but hundreds left Palmer on Saturday feeling hopeful and empowered about the actions taken in their community.

“They’re just there to try to make noise and instill fear in people and try to make us stop speaking our voices, and I just want those people to know that that’s not going to happen anytime soon,” said Annika Gagnon. “It just makes me so happy to see so many other people in Palmer that are so passionate about women’s rights and queer and trans rights and that’s really encouraging to see.”

What a colossal waste of time. These people have too much free time.

I didn't attend either rally, but I drove around Palmer as I visited several businesses, and I only saw like 50-60 people at the pavilion. I then drove over where the Trump supporters were and they lined all 4 corners in what I would say was easily 100 people.

In all, I would say the two groups were similar in size. I didn't see the interaction of the groups.