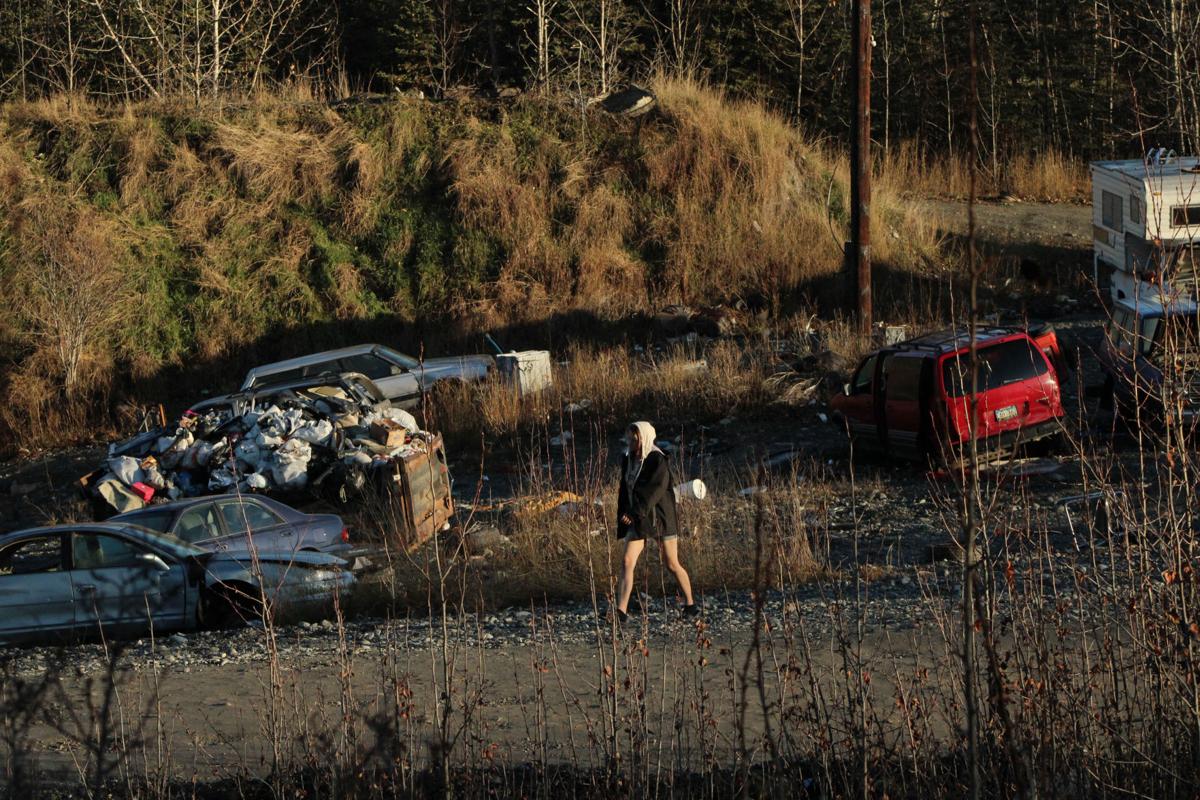 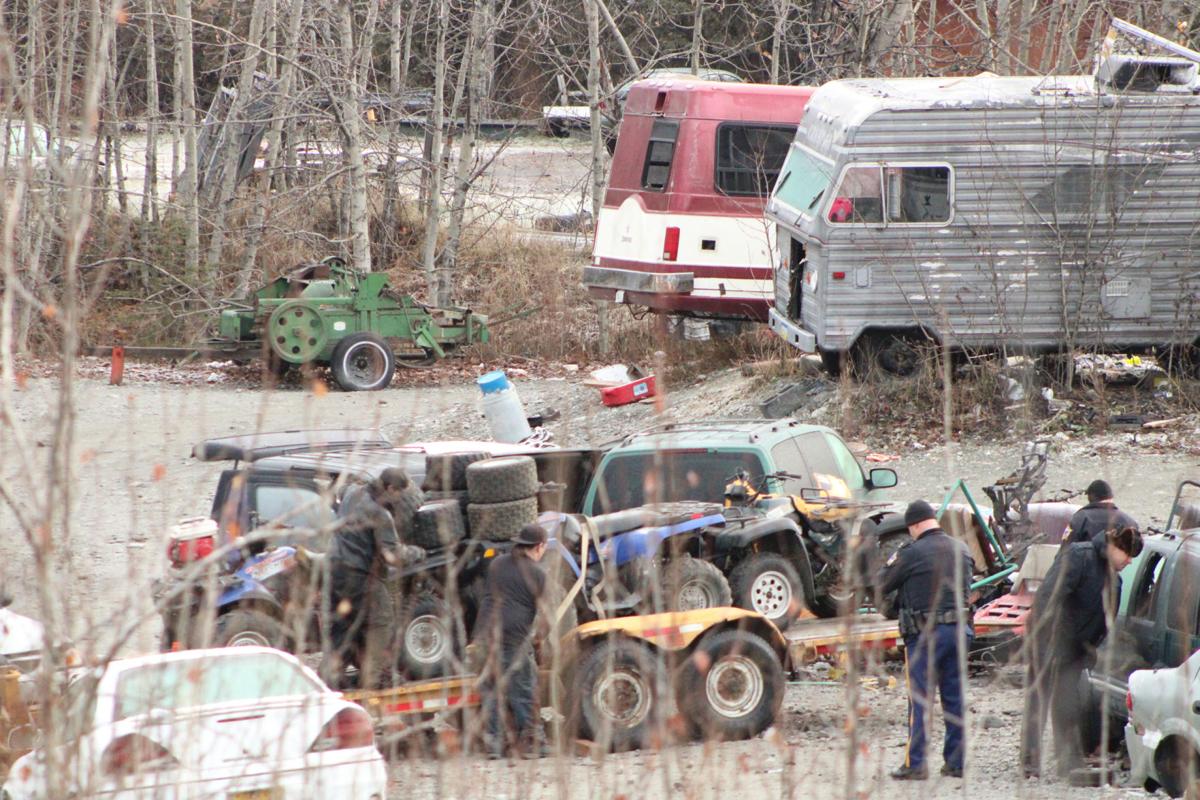 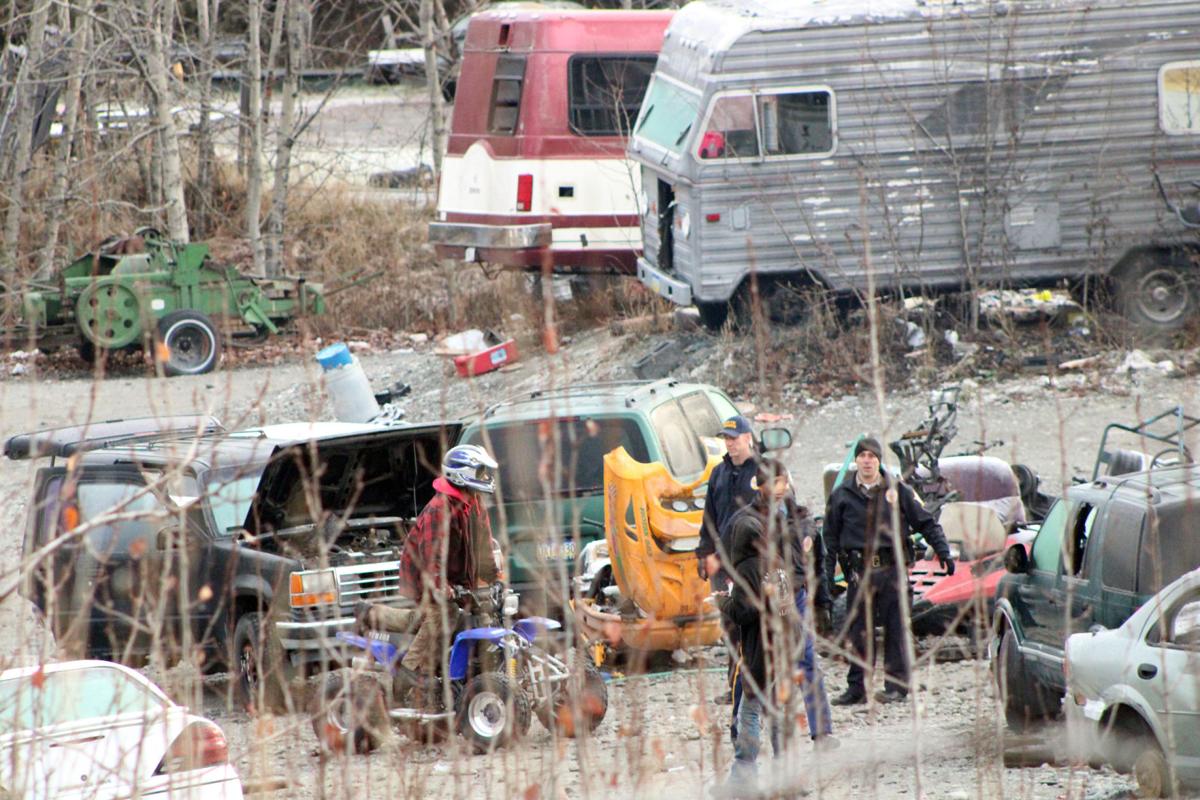 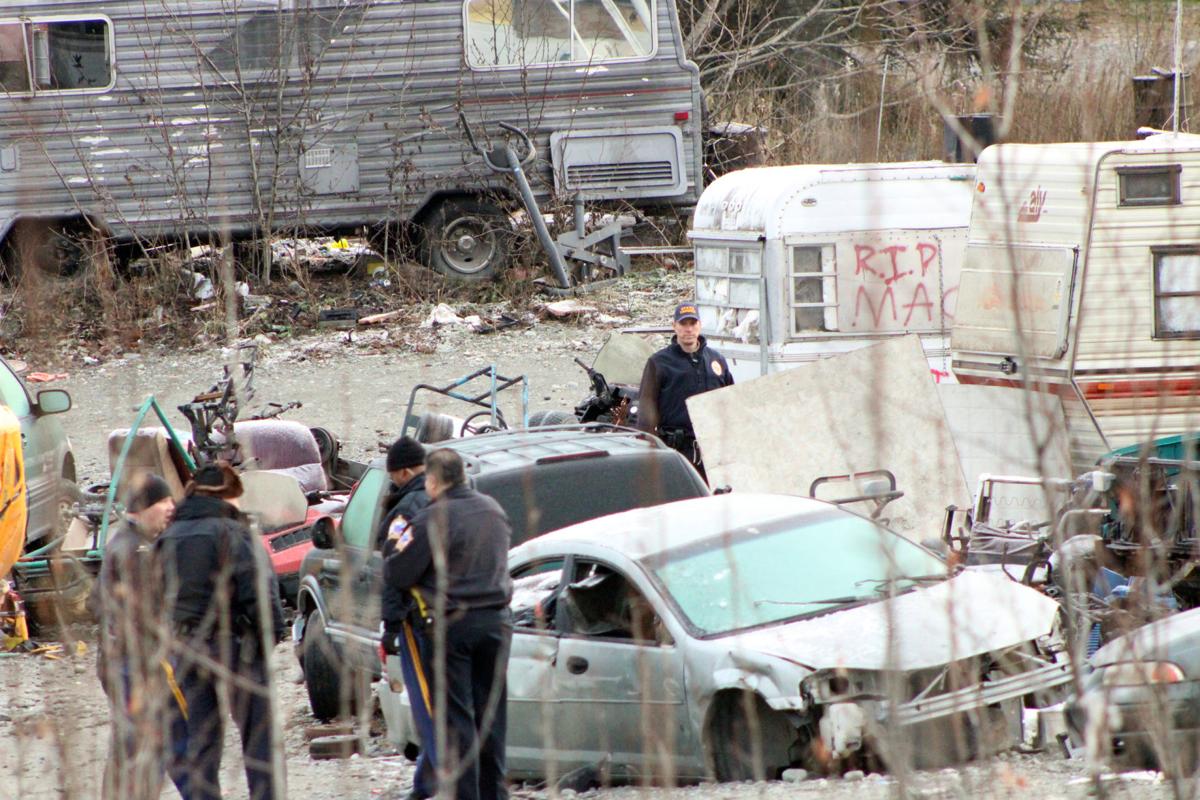 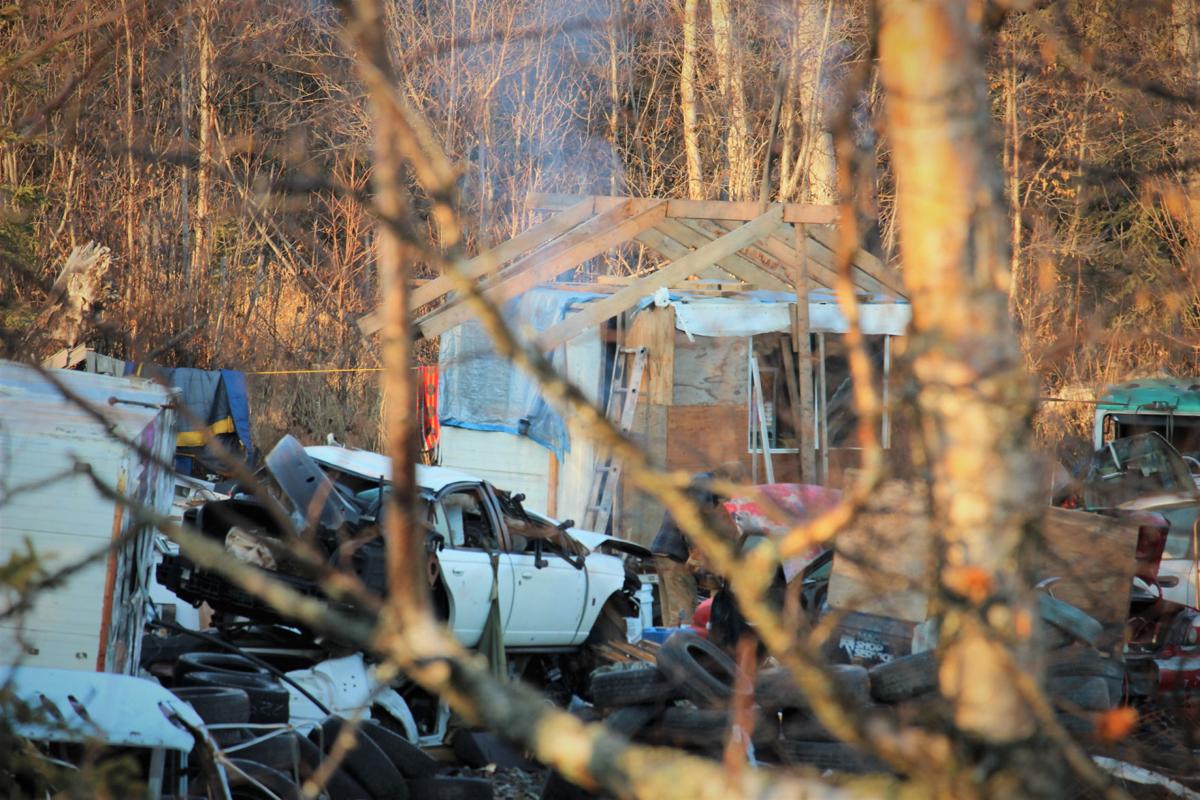 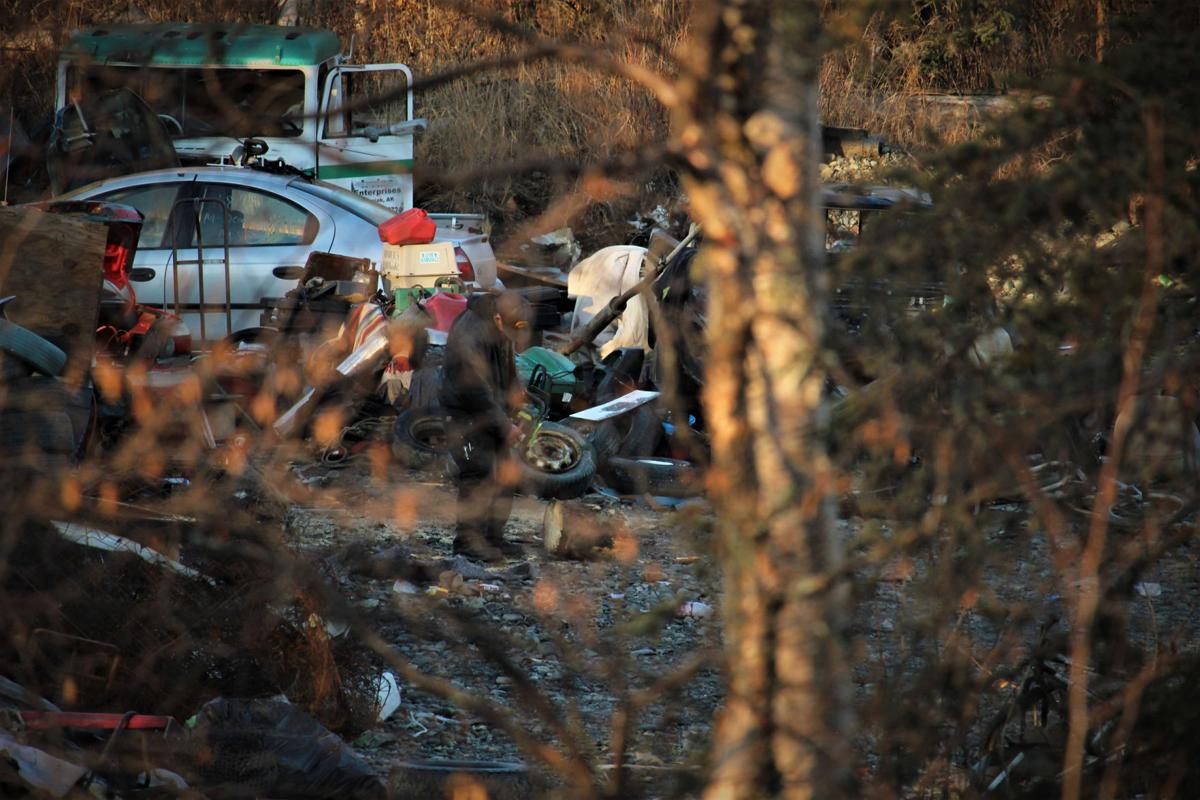 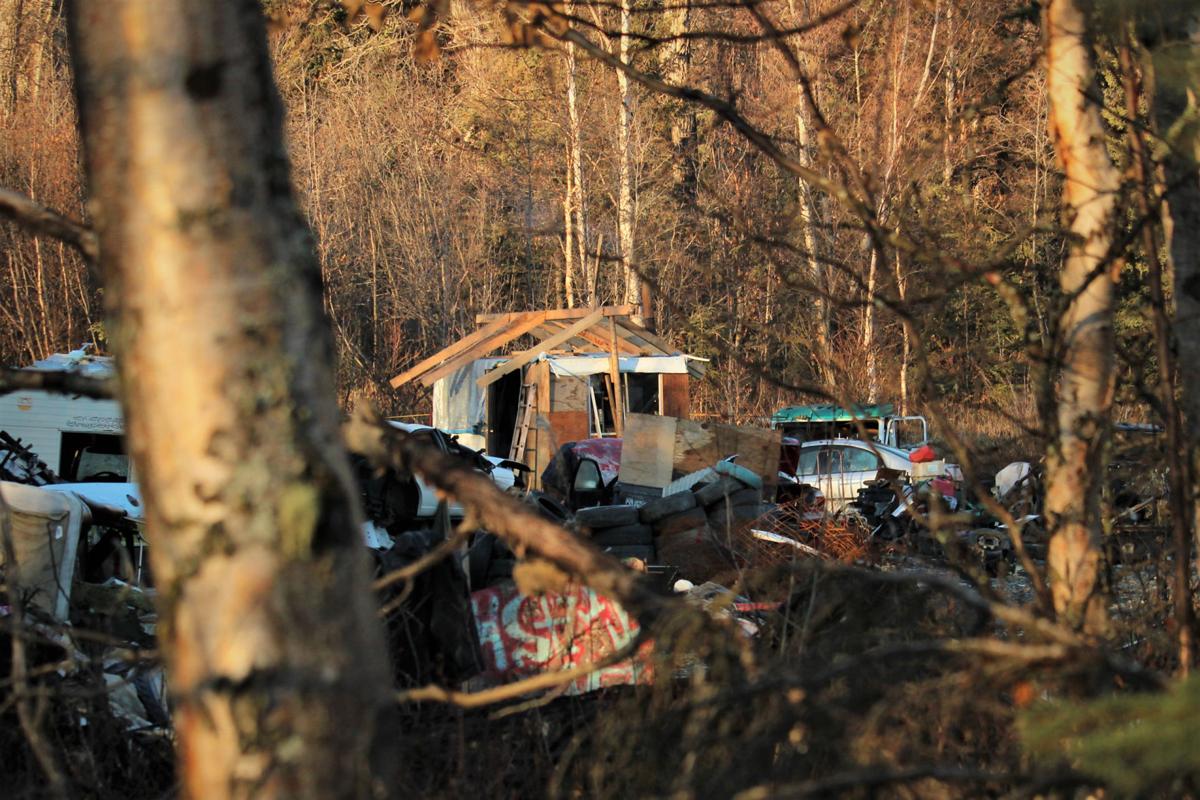 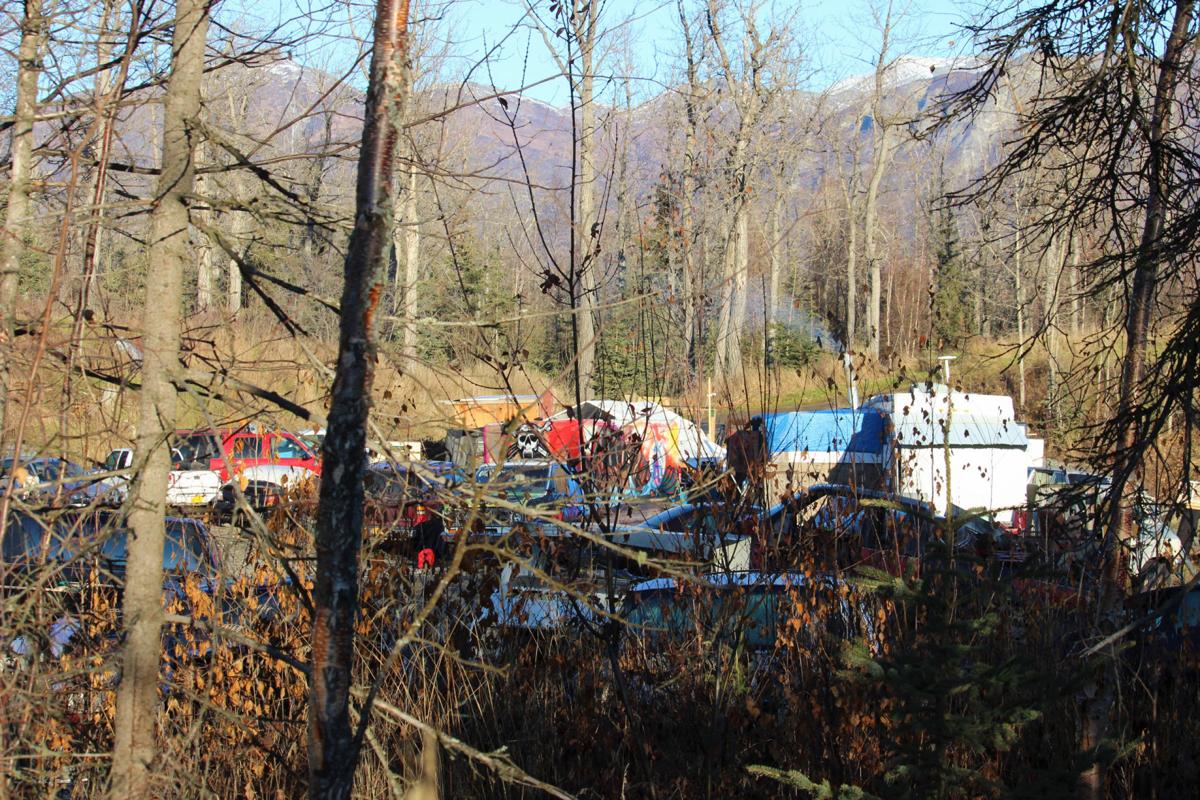 BUTTE — After years of junk, trash, and unwanted neighbors, the problem property often referred to as ‘the compound’ on South Bodenburg Loop in Butte was subject to a mass eviction by the Alaska State Troopers on Friday morning.

Shortly after 9 a.m., a half-dozen Alaska State Troopers vehicles arrived on scene at ‘the compound’ which is distinguishable not only by the burned building in the front of the property, but hundreds of junk vehicles strewn about the property leading back towards the Butte itself.

“I think it’s great that progress is happening and this place is going to be cleaned up. It’s been definitely frustrating for us to not be able to, with the tools that we have, and with the absent landowner, to not be able to meet the demand of the community to get that cleaned up,” Alex Strawn said.

Strawn works as the Development Services Manager for the Mat-Su Borough and oversees the code enforcement operation that has struggled to rid the problem property of the unwanted neighbors. Persistent problems of noise, junk, trash, and unsavory crimes at the compound have motivated Butte residents to take action. Sen. Shelley Hughes met with the Butte Community Council in September to begin organizing the eviction of the unwanted neighbors on the compound. The Mat-Su Borough began their legal process of pursuing a lawsuit against the owners of the property that had outstanding junk and trash ordinance violations dating back to 2015.

“Our case is because he is, an owner of property, the property is in violation of our code because of junk, trash and the burned building and until our code is complied with, our case is still active,” Borough Attorney Nick Spiropolous said.

The property owners, Mason Henry and Raymond Close, have moved out of state, but are still facing a nearly $1 million lawsuit over junk and trash violations after vacating the property and allowing squatters to make their temporary home there. While ‘the compound’ is not the only problem property where crime is concentrated in Butte, let alone the entire Mat-Su Valley, residents were happy to see progress toward cleaning up their neighborhood on Friday.

With a writ of assistance from Close and Henry’s attorney Neal Ainsworth received last week, troopers were able to once and for all evict the unwanted neighbors at ‘the compound.’ Notice has been posted on the property that troopers have authority to arrest anyone trespassing on the property. The compound’s immediate neighbor built a berm surrounding his property to keep squatters out. The school bus routes in the area were changed to avoid danger near the compound, and the Butte Community Council discussed the issue at three separate meetings earlier this year. Butte residents packed the gym at Butte Elementary for a meeting about the compound in October. Hughes and Rep. Cathy Tilton attended along with AST Captain Tony April, Sergeant Ron Hayes, representation from the Department of Environmental Conservation and borough staff who explained that they had done everything in their power, but required action from the property owners themselves.

“We have closed the property off where you can’t drive in there, posted no trespassing signs and have informed the troopers that there’s no contractual relationship with anyone to lease or allow them to be on that property, period,” Ainsworth said. “Now they have the legal authority to arrest anyone that’s on the property.”

Hale served on the Butte Community Council until his win on Tuesday in the election for Assembly District 1 which represents the Butte area. Hale said that a neighbor, Mike Morrow, has been the liaison between the community, troopers, and unwanted neighbors. Morrow stood and watched on Friday morning as squatters left the property. The driveway to the compound has been blocked off, but those living there have been given 48 hours to remove their belongings from the property belonging to Close and Henry.

“I’m thrilled. With going through what we have at Williwaw, I know how important it is for people to feel safe in their houses, in their neighborhoods, and they have to drive past that and nothing ever seems to get done. It’s gets to be an extreme frustration,” Borough Manager John Moosey said, referring to Williwaw, a Wasilla neighborhood that has also been plagued with problem properties. “I think this is a huge victory.”

Unfortunately Preston has been taking junk from there to add to his collection at the other compound on the loop. Also looks like some of those squatters moved to his place too. I'm sure the meth cooking will soon double.

Just YAY !!! And I'd like to congratulate Tim Hale on his win.

This is a great start. If all the car&trucks etc., be crushed and sold for scrap metal at maybe Butte Auto Salvage a mile or so from the compound.. Closest spot. Main thing is for all residents on the west side of the Old Glenn be a neighborhood watch to help troops keep it that way during the winter so plans can be made on how to ensure come spring there's no return to the area.