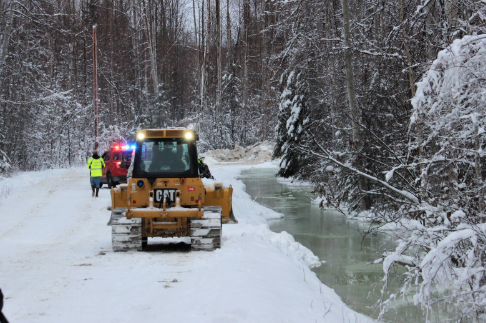 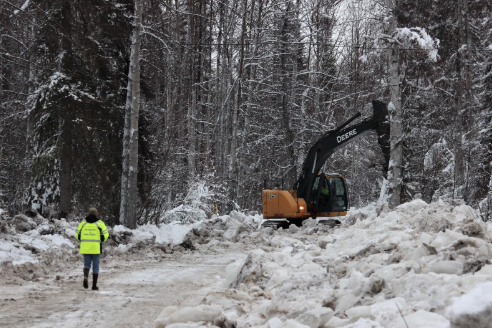 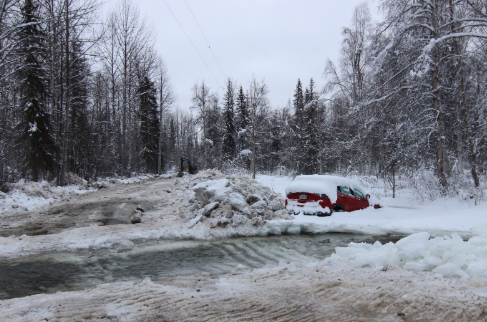 One of the remaining vehicles trapped in ice from Willow Creek

One of the remaining vehicles trapped in ice from Willow Creek

WILLOW — Mat-Su Borough Director of Emergency Services Ken Barkley spoke at a press conference at the Willow Community Center to discuss the progress on averting the flooding of Willow Creek at Deneki Bridge that has been plaguing a handful of residents for over a week and resulted in a disaster declaration by Mat-Su Borough Mayor Vern Halter and Manager John Moosey on Saturday. Borough crews from Operations and Maintenance continued to utilize heavy equipment to attempt to avert the ice dam near a 90 degree turn in Willow Creek.

“The count from yesterday is five homes with water damage," Barkley said. "The crews out there working right now are not diverting the water, they’re guiding it back into the river. We’re not going to take it anywhere else; we’re going to get it and just steer it right back into the river. Today we’re hoping to get another culvert put in to assist us with that the first 90 degree turn."

According to a press release from Borough Emergency Manager Casey Cook, the Water Rescue Team made 20 trips back and forth on Monday to shuttle residents into town for supplies and bring supplies to residents sheltering in place. Among those supplies were food, fuel, medication, 800 lbs of dog food and yak food. Of the six vehicles that had been stranded in the ice during the flood, all but two have been removed. Contrary to last weekend’s cold snap, the 50 degree change in temperature from 20 below to 30 above has drastically changed the flow of water. Barkley said that where residents were attempting to retrieve vehicles with chainsaws last weekend, water had begun to flow around them on Monday.

“That water it’s actually flowing like a river right on across that road now and that’s what we were hoping because we’re trying to get right across and right back in the river,” said Barkley.

While water has begun flowing around one of the flooded 90 degree turns in Willow Creek near Deneki Bridge, one remains dammed with ice. Borough officials are asking that residents do not drive on the nearby roads that could possibly negate the progress made by Borough O&M crews on Monday. Borough Water Rescue Teams have been able to access the flooded neighborhoods through two separate trails. One trail giving access is an old fire break trail which has a drop of 10 feet at the river crossing, making it inaccessible for all terrain vehicles. The other trail crews have been using is a sled dog trail that is a 45-minute snowmachine ride into the affected area. While the Borough has been dealing with the difficulties of flooding for nearly two weeks, the hope is still to get access to residents so that they can become self sufficient.

“We’re hoping we can get the road going but those are two viable options if an emergency happens and we had to evacuate,” said Barkley.

Why doesn't this article mention the Shirley Town Bridge? it used to provide a secondary access across Willow Creek about a mile from the now damned Denki Bridge.