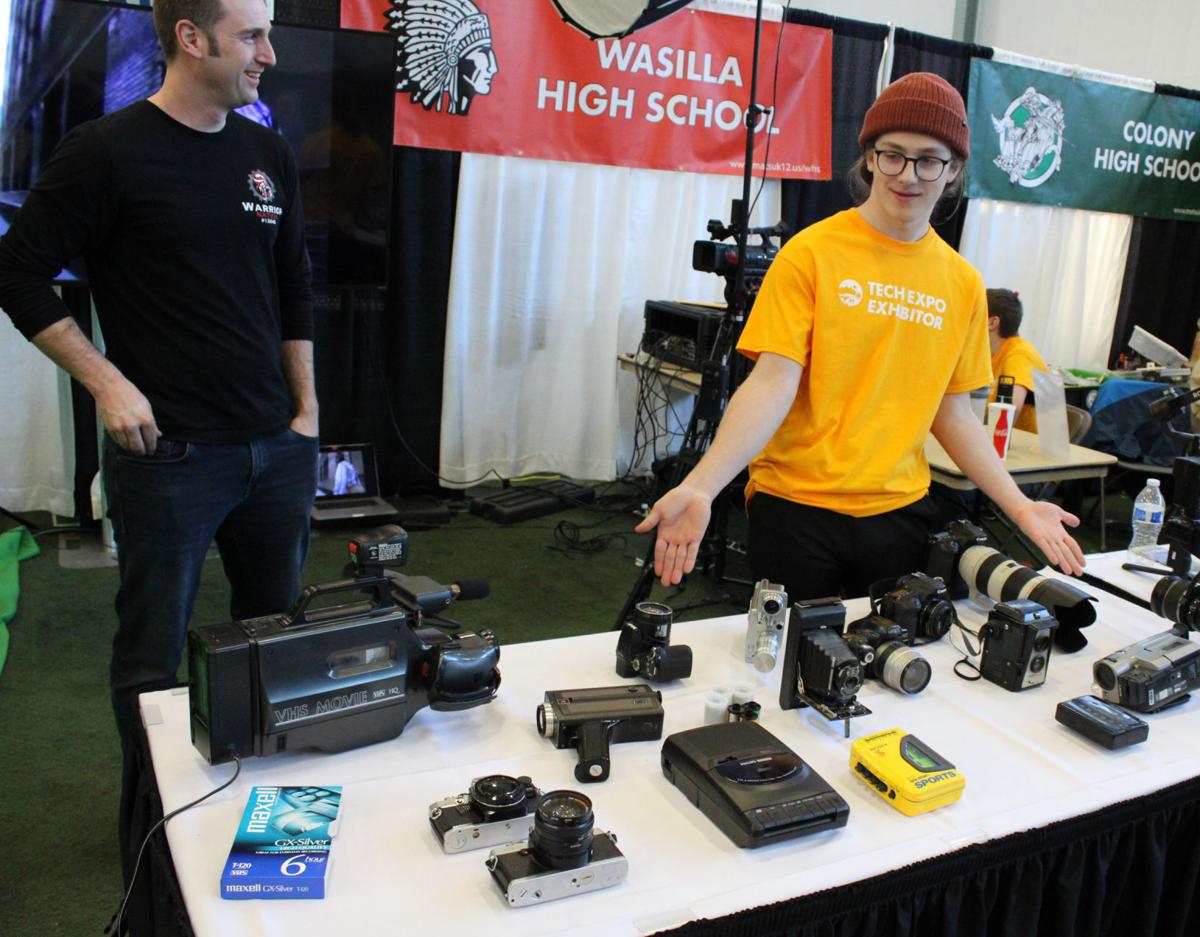 Wasilla High Avery Bell displays decades worth or electronic equipment during a technology fair at the Menard Center. 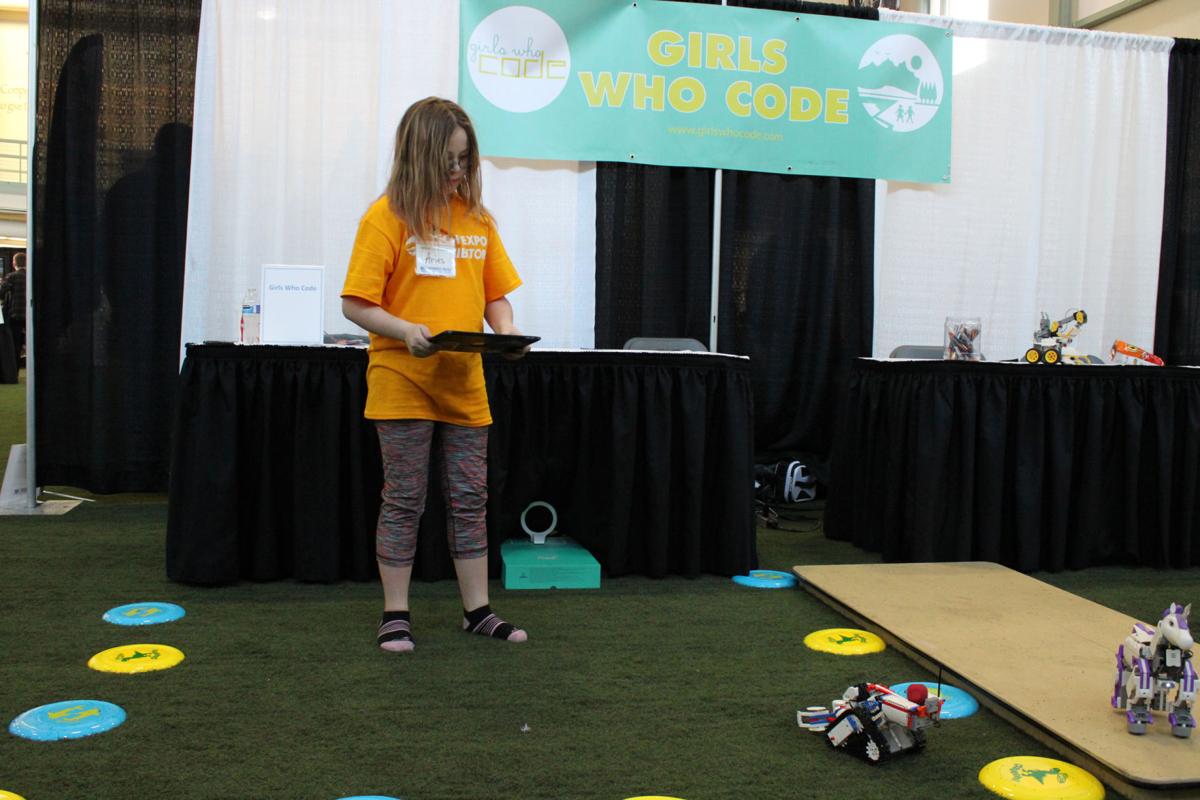 Wasilla High Avery Bell displays decades worth or electronic equipment during a technology fair at the Menard Center.

WASILLA — The Mat-Su Borough School District held its fifth annual Technology Expo at the Menard Center on Thursday to gather technological education programs throughout the district under one roof.

After four years at Wasilla High School and Wasilla Middle School, the Tech Expo moved to the Menard Center to allow for a greater space for booths and added non profit organizations that were able to present alongside elementary, middle and high school programs.

“We had pockets of innovation happening at different schools and there were a few of us in district wide positions who would encounter these as we moved around schools doing our work and realized that those people had a lot to teach other people but we didn’t have a venue to make that happen,” said MSBSD Program Administrator Brett Hill.

Dozens of booths were set up from school programs throughout the district who were able to share their technological education with other students within the district. Alongside the school booths, the Army National Guard, Division of Forestry and Division of Natural Resources Mining Land and Water Surveyors also set up shop to show what they know.

“Surveying is like, such an important field. It’s so old but it’s still integrating this new technology in there and it’s really exciting to see kids be really pumped about it,” said surveyor with DRR Land and Water Valifferree Bechtel.

The surveyors with the DNR Mining, Land and Water department displayed a massive $14,000 drone used for land management and subdivision planning that has a $140,000 lidar attachment secured to the bottom. The giant drone helps surveyors not only to help with land management while surveying, but has capabilities for crime scene investigation as well.

“It’s so diverse that you can get people that want to be mountain men and never see the public, be out there surveying and then you can have the guy in the office,” said Cliff Baker.

While DNR and the Division of Forestry were able to show off their expensive high-tech equipment, Wasilla High School senior Avery Bell harkened back to yesteryear. On a table next to brand new camera equipment used by the WHS Digital Media class, Bell displayed his personal collection of retro electronics. Bell’s old model cameras and walkmans have been a hit year after year.

“Last year we had all this new awesome cinema equipment and he had his stuff laid out and all the kids wanted to do was come up and look at the old stuff,” said Bell’s teacher John Notestine.

Juxtaposed against the equipment utilized by the WHS digital media department to broadcast sporting events and graduations, Bell’s antique camera collection has been pieced together over years. Without newer developments found in modern cameras, Bell has been able to repair many of his thrift store finds into working order.

“It’s just fun to see the kids when they look at stuff and go that’s what people used to take pictures on? And just seeing them interact with what was and what is now,” said Bell.

The space on the turf at the Menard Center allowed for demonstrations of robots of all kinds. A pen for robots built by CTHS students allowed them to attempt challenges within the pen while operating a controller connected to an app.

“You can use this as a baseline to do many things that some things you wouldn’t think about doing,” said CTHS freshman Carolyn Deal.

While not yet in middle school, Sherrod students in the Girls Who Code program held down one of the most popular booths. Students programmed three different robots that were controlled by tablets, one of which had the ability to launch a ball high in the air.

“At one point we had about six or eight girls who have been in our coding club and they ran the show. I felt like I didn’t even really need to be here,” said Sherrod fifth grade teacher Gail Shuler.

Girls Who Code is a national program that is entering its second year in MSBSD schools. Shuler has been delighted by the assertiveness of her young coding students.

“All of them just jumped right in, talked to everybody that came, offered them to code, showed them how to code if they haven’t coded before and were just really natural with them. It was perfect,” said Shuler.

Fresh off the hottest fire season in history, Brett Schimmack and Ethan DeBauche with the Division of Forestry were able to display gadgets used in fighting fires while relaying the mantra of Smokey Bear.

“They don’t see this side of firefighting and some of the technology that we get to use and being able to be in a space that allows us to share that with other innovators in the community is really cool,” said Schimmack.

The DOF booth was adjacent to a trailer equipped with over $100,000 in radio equipment and featured a drone at the top of a 30 foot tall extension that showed the heat signature of people around the booth.

“We’re also just using all of our technology as an outreach recruiting future firefighters by showing them all the tech that we use and looking for the next generation,” said DeBauche.

Mat-Su Career and Technical High School teacher Galen Sparks manned a booth designed to draw the eye of prospective students who would want to enroll in the natural resources career and technical Education pathway at CTHS.

Sparks’ students have the opportunity to earn their red card through the DOF while still in Sparks’ class at CTHS before beginning their career as wildland firefighters.

“For a lot of young folks, the idea of working inside the rest of their life sounds daunting and for some students the idea of working outside, combining some skills and knowledge of fire science with skills of constructing fire line and excessive force, that’s really exciting for them,” said Sparks.

Deal hopes to parlay her robotics expertise into a career after high school. Conveniently stationed just beyond the robotics pen was the Air National Guard, where robots are used to detect harmful chemicals.

“It’s almost competition and sometimes that’s a dirty word in public education but man, that’s how you raise the bar,” said Hill. “You put people out here and see what can be done and what other people are doing and say why can’t we have that.”