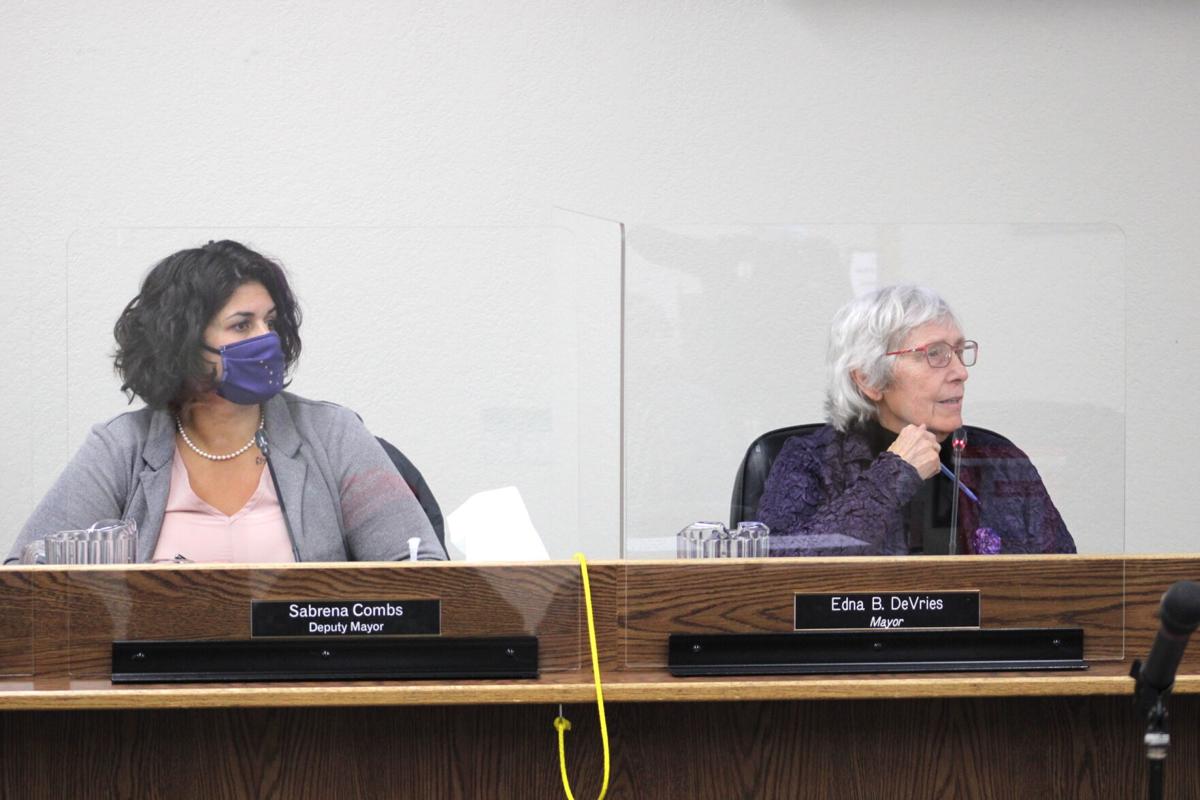 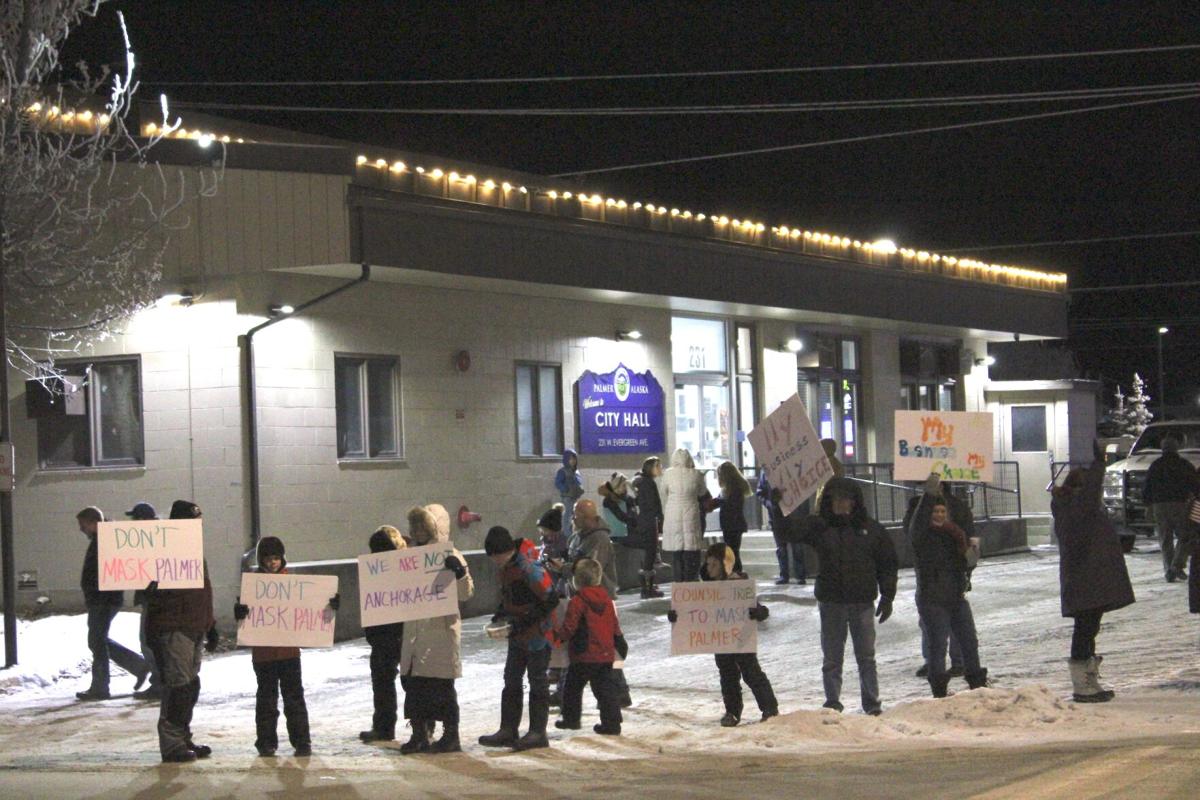 Residents shared their views on a proposed ordinance that would mandate wearing masks in Palmer. 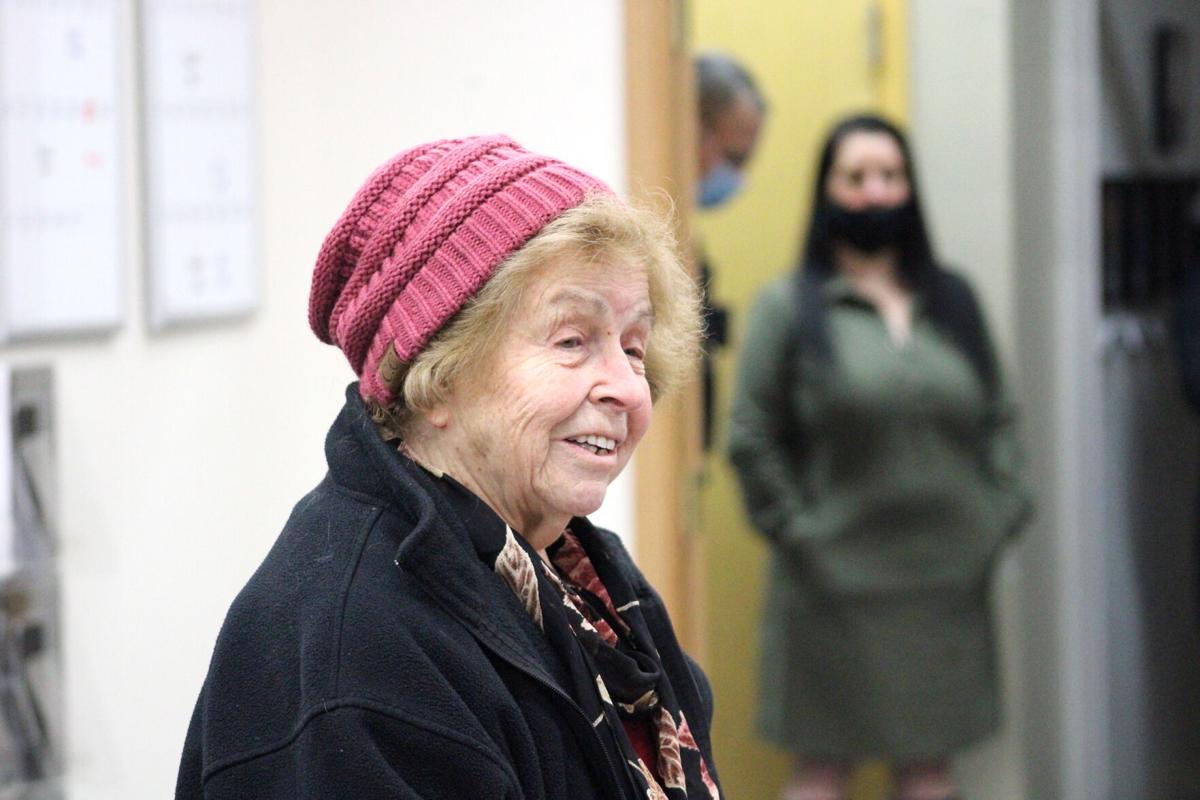 Residents shared their views on a proposed ordinance that would mandate wearing masks in Palmer.

PALMER — After two hours of public testimony, the Palmer City Council decided that they wanted to continue hearing from the public about the controversial mask mandate Ordinance 20-016.

On Wednesday, dozens of people stood outside and were ushered into Palmer City Hall in groups of five to deliver their public testimony. An overwhelming majority of the testimony delivered in person on Wednesday was in opposition to the mask mandate, but with over 600 emails sent to the council that will be read into the record, that number could change when the council meets Nov. 25 to continue the public hearing.

“I think that it is only fair that the people that sent emails have the opportunity for their voice to be heard, their opinions, not just a yea or a nay but more of the reasoning behind the reason that they want a mandate or don’t want a mandate, just as the people who came in person today. Obviously with the COVID-19 pandemic, a lot of people don’t want to show up in council chambers with a bunch of other people and I don’t think it’s fair that we don’t allow their voices the same opportunity to be heard,” said Councilwoman Julie Berberich.

Prior to the meeting, a large group waving signs and American flags gathered in the parking lot at Palmer City Hall. Many of those people then stood outside in single digit temperatures, waiting their turn to speak. In person, 57 of the 62 people who spoke were in opposition to 20-016 with five people speaking in favor of the mask mandate. After a break, Palmer City Clerk Norma Alley and Deputy Clerk Kara Johnson began reading through the over 600 emails sent in to be read into the record. After 48 emails had been read, one was written in opposition of the ordinance and 47 were submitted in favor. After 109 comments from the public were delivered to the council, 58 were in opposition and 51 were in favor. There are still over 500 emails to be read into the record, which will continue next Wednesday.

“Everything that deters business is not good,” said Janet Kincaid. “I don’t think we’re Anchorage. I take great pride in the fact we’re not Anchorage, so I certainly don’t want to see an ordinance passed that came out of Anchorage and the last thing that really bothers me is fear. When you make a mask mandate, it encourages fear and I’m worried for the younger generation.”

“My heart goes out to anyone who lost someone from covid, I’m sure not all but most had underlying conditions. You know if you’re one of those and you take the extra steps according to your own needs,” said Michelle Kincaid. “My mom, she had a heart attack in December, a stroke in March and several other underlying items. She’s 86 and she makes her own educated decision not to wear a mask.”

As the council heard testimony, the crowd assembled at the corner of Cobb Street and Evergreen Avenue stood in the cold, soliciting honks from passersby that could be heard in the council chambers. As of Wednesday, there had been 2,400 cases of COVID-19 reported among Mat-Su residents and 14 people are currently hospitalized at Mat-Su Regional Medical Center with coronavirus. Palmer has had 658 cases of COVID-19, eight Palmer residents have been hospitalized and one has died. Chickaloon traditional council member Lisa Wade brought two masks with phrases in Ahtna that she gifted to the council, one which said ‘honoring our ancestors’ and another that said ‘living native traditions.’

“Our ancestors survived the 1918 flu pandemic and I want to recognize that we think it’s important so other people can recognize that we want to all survive this one as well,” said Wade. “I am unwilling to put my family or the elders or other vulnerable medically fragile individuals I serve at risk to support our local economy. Sadly there are just too many people who refuse to do the right thing and protect others by wearing a mask. Unfortunately, initially the science around mask wearing was unclear and conflicting in the beginning stages of this pandemic. Wearing a mask became a political issue and a strong symbol of the divisiveness of politics in our state and nation. Somehow, asking someone to protect the health of others became equated with taking away liberties and freedom. The science around COVID-19 is becoming clearer every day.”

Those who spoke in opposition of the ordinance cited their concerns for the local economy and quoted statistics claiming that the wearing of masks is unhealthy. Others who spoke in favor of the mask mandate also voiced the need for a mask mandate to protect the economy and also cited studies showing that mask wearing is effective.

“It’s my belief the ordinance is poorly structured at this time and with all the changes required, it makes it difficult for someone to stand in front of you folks and speak from an educated perspective. Legally if the city could not shut us down earlier this year due to the fact of being a second class city, how can you issue this mandate. How is this different,” said Kelly Turney. “I would encourage the city council to make a statement regarding the use of masks. I believe it is more appropriate for a resolution or proclamation in support of the Governor’s statement asking all Alaskans to wear masks. An ordinance is too heavy handed and I believe will negatively affect the business climate and the reputation of our town.”

Currently, 36 different states have some form of mask mandates, but Governor Dunleavy has stated throughout the pandemic that local municipalities should enact mask mandates if they choose, and he would support them in doing so. Eugene Carl Haberman has requested that the council enact a mask mandate prior to the introduction of the ordinance last week.

“Your mayor right here is not wearing a face covering, isn’t that ironic,” said Haberman. “Those who are questioning masks are confusing freedom with responsibility.”

Turney said that 85 percent of patrons at Alaska Picker wear a mask on their own and he does not believe a mandate would be complied with by those remaining. Some who spoke in person did so with their entire families including children. Medical professionals spoke against the mask mandate and local business owners said that they have seen an increase in customers from Anchorage. Alaska proud boys President Mike Robinson spoke to the council, saying that a mask mandate would be tyrannical government action.

“I was super disheartened by how many people tonight insinuated that we all already had our mind made up, but I intend to make my mind up based on the testimony,” said Deputy Mayor Sabrena Combs. “That really really upset me that they just think that we have this agenda but that’s the whole point of public testimony is to help form our opinion.”