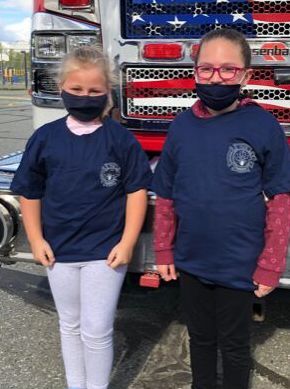 Big Lake Elementary third grader girls Erabella Hunt and Lily Caven stand in front of an emergency response vehicle after being honored as heroes for helping save a man's life. 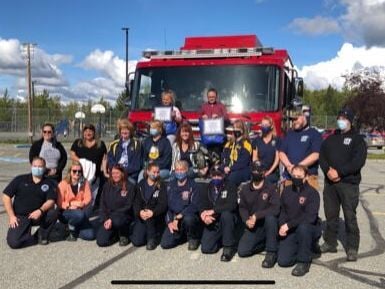 The two girls pose with the responding crew after special school assembly.

Big Lake Elementary third grader girls Erabella Hunt and Lily Caven stand in front of an emergency response vehicle after being honored as heroes for helping save a man's life.

The two girls pose with the responding crew after special school assembly.

WASILLA — Big Lake Elementary third-grade girls Erabella Hunt and Lily Caven found themselves in a unique position waiting at the school to go home Sept. 4 that ultimately helped save a man’s life.

“It was an amazing situation, just knowing how everything unfolded it was literally a perfect scenario to save somebody’s life. You never come to an elementary school thinking it’s gonna’ end with someone’s life being saved, but it did,” Big Lake Elementary School Principal Leigh Magnan said.

The girls noticed a man with a bleeding head on the playground, prompting both of them to immediate action. They quickly went back to the school to let the adults inside what they saw outside.

“You can look back at the footage outside the building, and they didn’t hesitate at all,” Magnan said.

Megnan said that about 15 staff members responded to the incident. She said a school nurse had an automated external defibrillator on hand and rushed to the man’s aid.

She noted that the responding firefighters told them that only one to two percent of people typically survive this type of situation, so the timing and immediacy of the response made all the difference.

“By the time the medics and the fire department responded, he was breathing on his own. The gentleman’s wife and the medics credit the Big Lake staff and the girls for saving his life. They’re heroes,” Magnan said.

According to Magnan, the girls have been very humble about the situation. She said they were already good friends and this will undoubtedly bring them even closer together.

“Tiny tots and they’re heroes, so it’s cool,” Magnan said. “We talked last Friday about what a hero is, even in definitions from little kids we’ve got in the building, 5-year-olds. They know that a hero is somebody that does something good for other people.”

The school held an outdoor assembly with the first responders who were on the scene, celebrating the two girls’ efforts, both receiving awards for their actions.

“You see smiles on these little kids’ faces as they start to really understand the gravity of what they’ve done,” Magnan said.