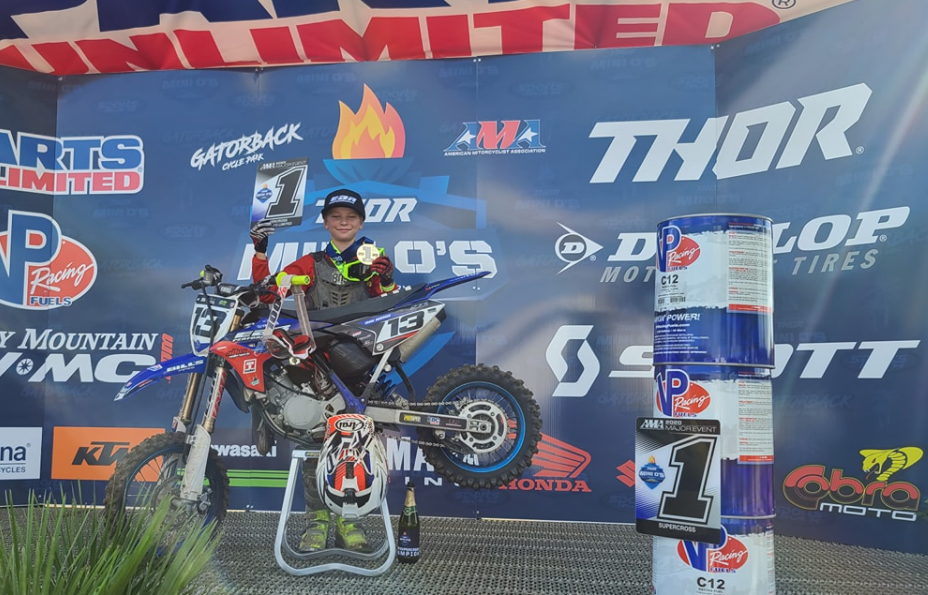 GAINESVILLE — At the largest amateur motocross race ever on Nov. 24, 12-year-old Chase Andersen, of Sutton, won his second Supercross title at the 49th Mini Olympics at Gatorback Cycle Park in Gainesville, Florida. Following in his older brother’s tiretracks, 6-year-old Cruz Andersen also stood atop the podium with a 10th place finish at Mini O’s.

Andy Andersen has been facilitating his sons’ love of dirt bikes since they were toddlers, allowing them to train at their house by building a motocross track in their backyard in Sutton. As a young rider, Chase routinely won races against older riders and thrived on competition. Now racing on the national stage and training in the Lower 48, Chase has won the Mini O’s two out of the last three years. After winning in 2018, Chase moved up an age class and took second in 2019.

“I thought this year was the best. I checked out eight seconds from my class and I was just running a perfect moto and I thought it was perfect and it’s the best race I’ve ever done,” said Chase.

After signing with Yamaha, Chase has continued building his fan base and sponsors as he continues to climb podiums after races. Chase took home the title in the 65cc Supercross and had the fastest lap in all three classes that he raced in.

“It was an exciting year for him. He got more national podiums and No. 1 AMA plates than he’s ever had before and it’s because we were putting the time in,” said Andy. “I can tell you that I literally cry when he wins that race. I break down. I’m so proud of him.”

As Chase has continued to succeed on the national race circuit amidst a pandemic, Andy said that training became crucial. During this pandemic affected season, injuries were more prevalent than in years prior. Not only can the Andersen brothers train at home in Sutton, but trained for two months in the Lower 48.

“We got affected pretty hard by COVID at first in the season and we flew all the way down to Texas for James Stewart Freestone National which was one of our Yamaha factory contracted races to be at and it was in Texas and we were on the starting gate when that all broke out and they literally pulled us off the starting gate and said we can’t race,” said Andy. “We didn’t get to race even though they already started practice and that was kind of a reality of what was going on with us for the first time.”

Andy said that the support of fans of Chase and Cruz along with help from sponsors gave them the edge on the track. With Chase’s Yamaha sponsorship, custom spokes were built to prevent him from breaking tire rims jumping his bike distances over 100 feet. Chase’s training regimen begins with an early morning run followed by four hours of training on dirt bikes, which he often follows with more training on his own.

“It’s pretty cool to see my son that dedicated to something he loves and that mature with his training without having to have any pressure put on him or anything. All I’ve got to do is facilitate him and he’ll put in the work and get the results. That’s awesome,” said Andy.

While the similarities between Chase and Cruz are obvious, Andy has noticed distinct differences in riding styles between the two during training runs. As the older brother, Chase works with his younger brother on his riding.

At one point this year, Chase was ranked No. 4 in Moto Playground Magazine, prior to adding his second Mini O’s title to his resume. Chase has his eyes set on the Olympiad award for overall points at Mini O’s, but has already established a brand and name recognition among the motocross community. Cruz not only finished top 10 at Mini O’s, but also finished top 10 at Loretta Lynn.

“He’s probably better than Chase when Chase was his age. I have to put it in perspective to make sure I don’t put all the spotlight on Chase because it’s hard not to focus on him when he just won a big race but it’s like you killed it too, so I’m always playing the best dad I can for them both and they both have completely diff mindsets,” said Andy. “He definitely has his own identity at the track and talking to everybody and even in the pits. He’s got his own identity and people love Cruz.”

As the racing Andersen family rides into 2021, they are hoping for faster lap times and continued support from the fans that have already shown they exist far and wide. Chase recently sold an autographed jersey to one of his fans and local businesses donate air miles to help the Andersen brothers fly to compete at races.

“Stuff like that is kind of happening now that never really happened before, he’s getting more of a fan base. It’s pretty exciting,” said Andy. “That was pretty cool to kind of see him be the poster boy for Yamaha for a little bit there, so it was a big deal and every year as he gets older and the classes get harder and he still does good we get a little bit more help a little bit more support and a lot more people recognizing him.”