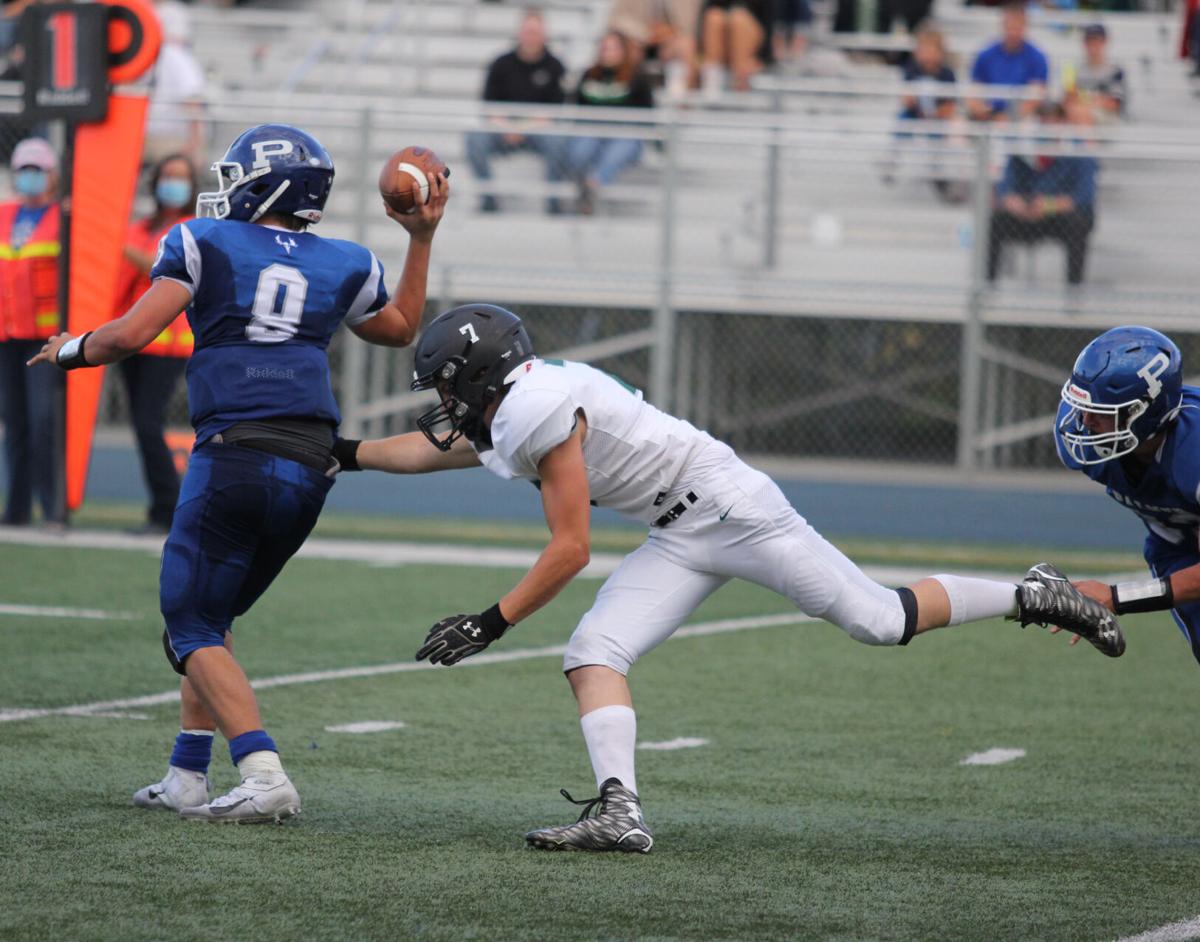 Palmer quarterback Ben Simmerman tries to escape Colony's Wyatt Crump during a loss to the Knights. 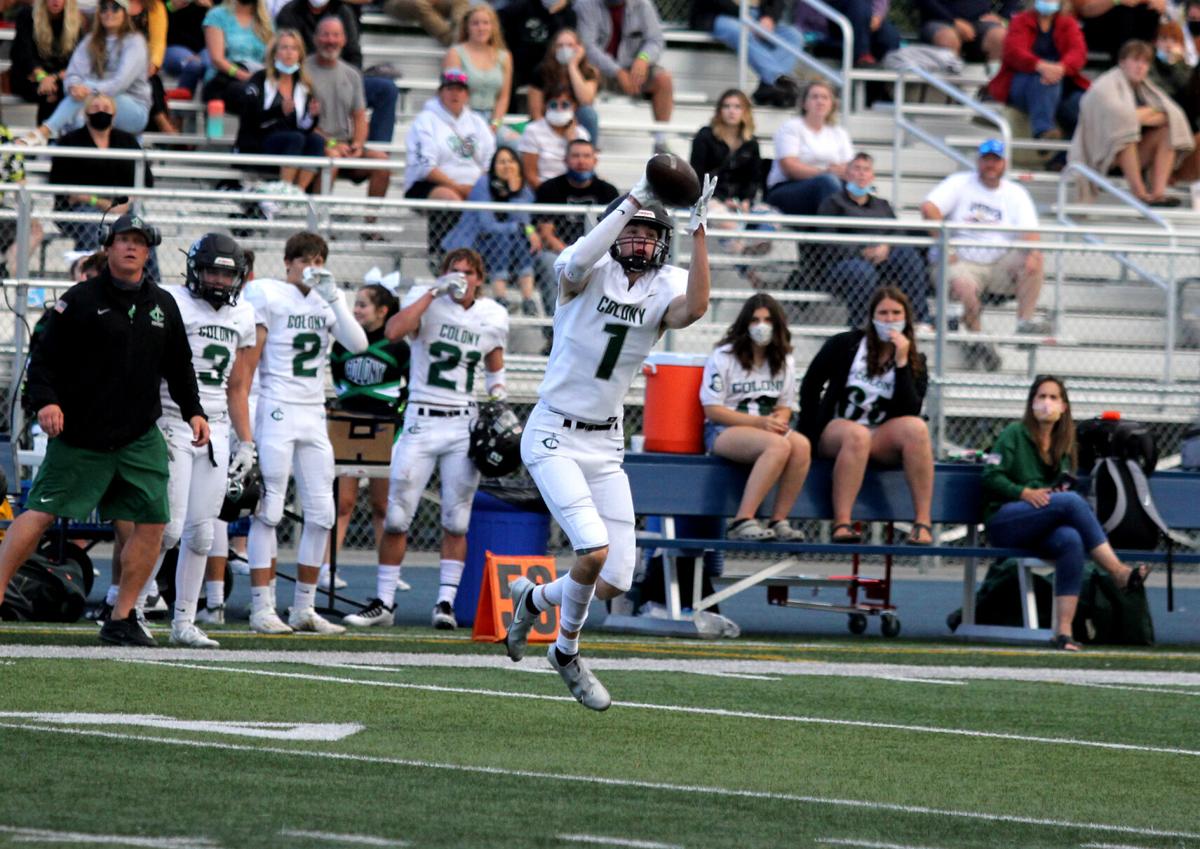 Colony High's Patrick McMahon catches a pass during a win over Palmer. 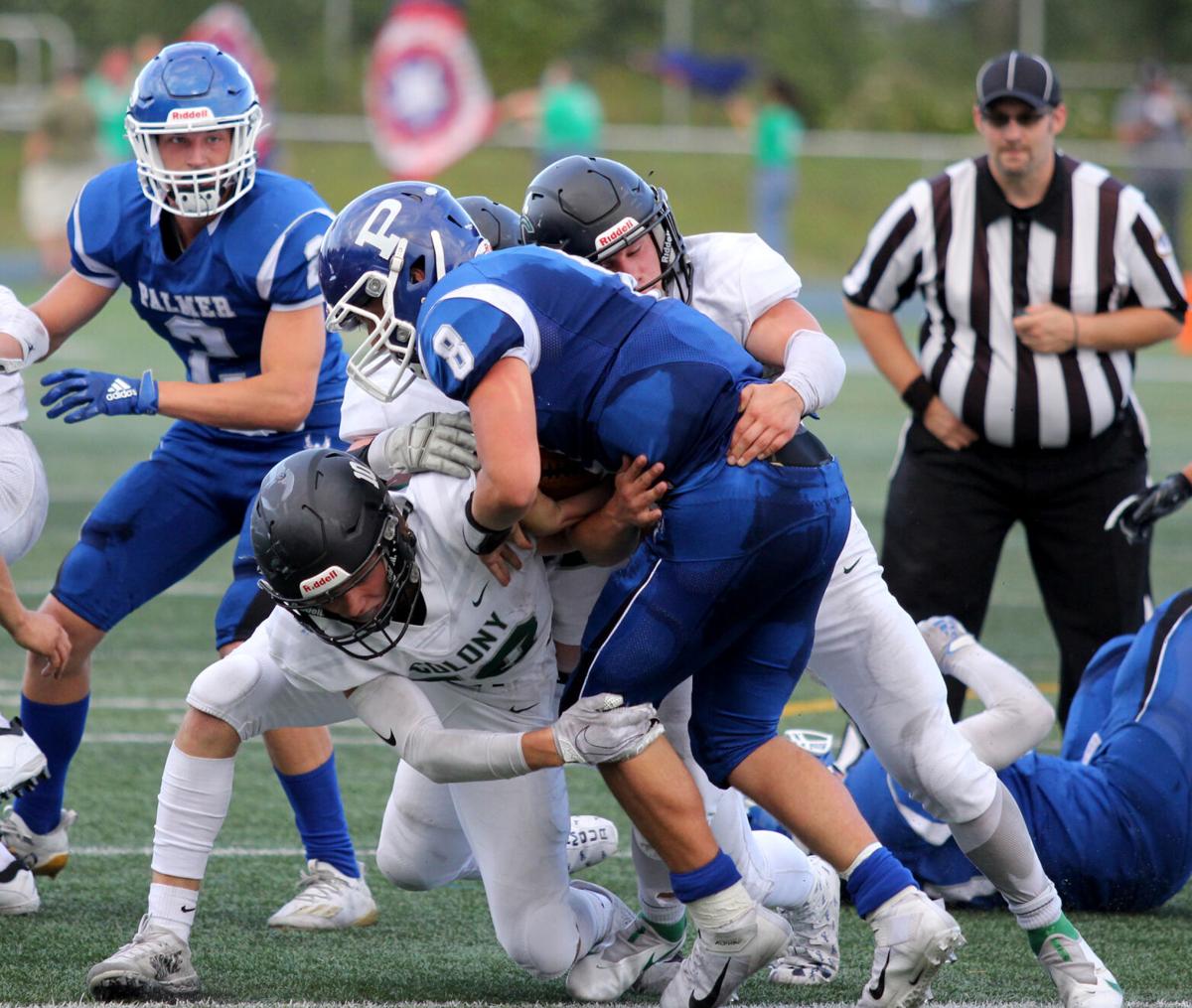 Palmer quarerback Ben Simmerman is tackled by a pair of defendesrs duinrg a loss to Colony. 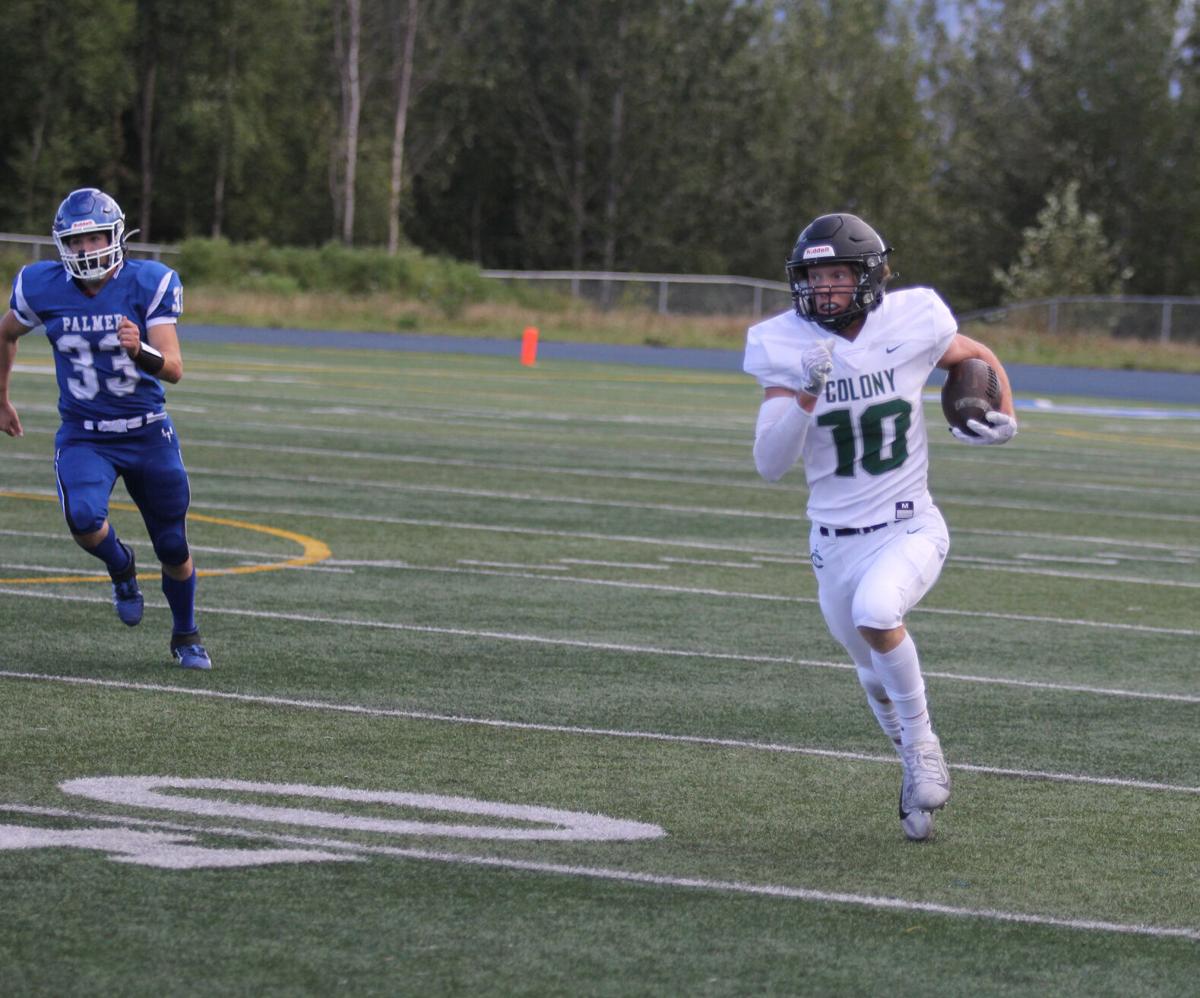 Palmer quarterback Ben Simmerman tries to escape Colony's Wyatt Crump during a loss to the Knights.

Colony High's Patrick McMahon catches a pass during a win over Palmer.

Palmer quarerback Ben Simmerman is tackled by a pair of defendesrs duinrg a loss to Colony.

PALMER — After months of uncertainty regarding prep sports during a coronavirus pandemic, Valley football teams finally hit the field Friday night, and the Colony Knights took advantage of the opportunity in a big way.

The Knights galloped to a 49-0 win over rival Palmer at Machetanz Field.

Nash said the Knights have about 118 players in the program. That number includes about 42 freshmen. The total number of Knights is nearly twice that of a Colony program that advanced to the postseason and upset top-seeded East Anchorage in the first round of the 2019 playoffs. After a summer’s worth of strength and conditioning while adhering to the Mat-Su Borough School District’s COVID-19 protocol, Nash said it was great to simply get out on the field for an official game.

At Palmer High, Colony senior standout Aidan Ehmann finished with 112 total yards and two touchdowns on offense, and double-digit tackles from his safety spot on defense.

“Ehmann is incredible on both sides of the ball,” Nash said. “He is fast, he can hit and he is agile.”

Nash said the trick is finding a time to give players like Ehmann a break. But that’s where the depth comes in, Nash said.

“That’s the nice thing about having some depth,” Nash said.

Nash also praised his upperclassmen who have stepped into leadership roles.

Alley, Colony’s junior quarterback, threw for 124 yards and three touchdowns without tossing a pick. Alley connected with a pair of football newcomers, better known for their time on the Colony boys basketball team, on touchdown passes. Patrick McMahon, the 2019-20 Alaska Association of Basketball Coaches 4A Player of the Year, grabbed a 7-yard jump ball in the corner of the end zone in the third quarter. McMahon’s hoops teammate, Evan Gatton, pulled down a 4-yard scoring pass in the second. Ehmann also caught an Alley pass and ran it in 24 yards for a score,

Ehmann finished with 53 yards rushing and a touchdown, and 59 yards receiving on a score. Landis Erwin led the Knights with 91 yards on the ground. Of that total, 42 came on Colony’s first play from scrimmage.

The Knights rushed for 234 yards in the win and averaged more than seven yards per carry.

“Hats off to our line today,” Nash said.

Lucas Frank led Palmer on the ground with 33 yards rushing. Palmer quarterback Ben Simmerman completed 4 of 8 passes for 47 yards and rushed for 26 yards.

Colony is a Division I team in Alaska, while Palmer is at the Division II level. Due to the coronavirus pandemic and school district mitigation protocol, Mat-Su teams in all fall sports are only playing teams within the district through Oct. 14. Local football teams currently have a six-game schedule over an eight-week stretch.