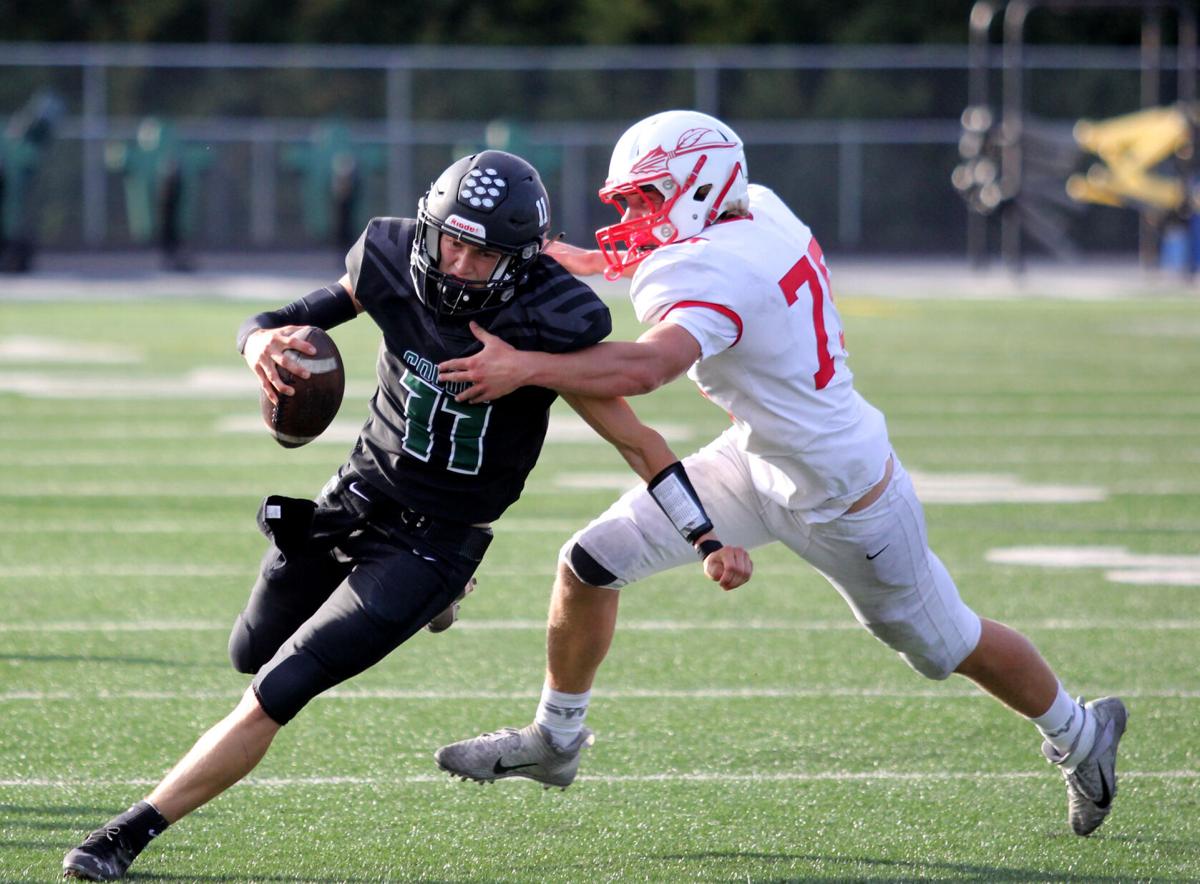 Colony quarterback Ben Alley works to escape the grasp of Wasilla defensive lineman Andrew Devine during a win over the Warriors Friday, Aug. 28, 2020. 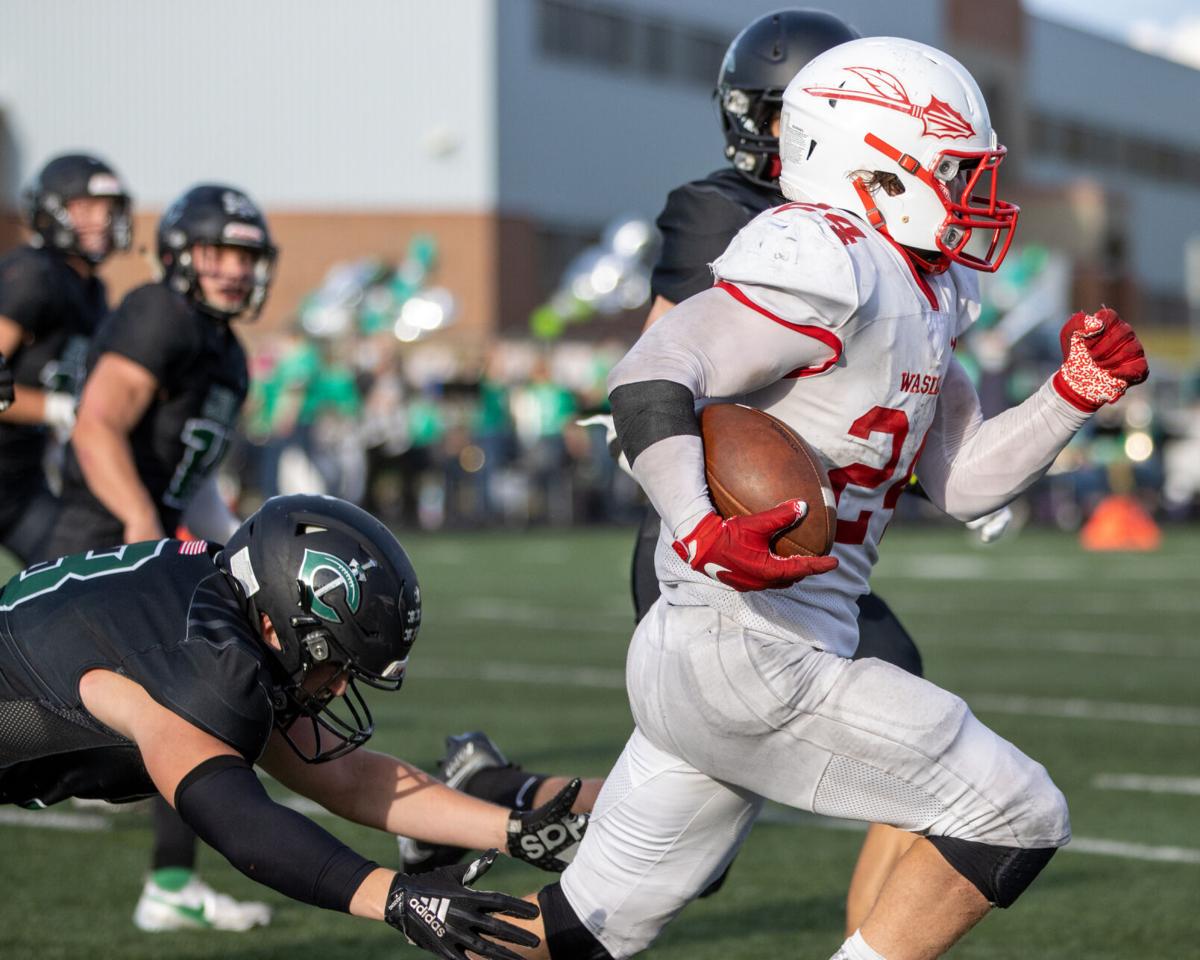 Wasilla's Colton Lindquist breaks a tackle during a loss to Colony Friday, Aug. 28, 2020. 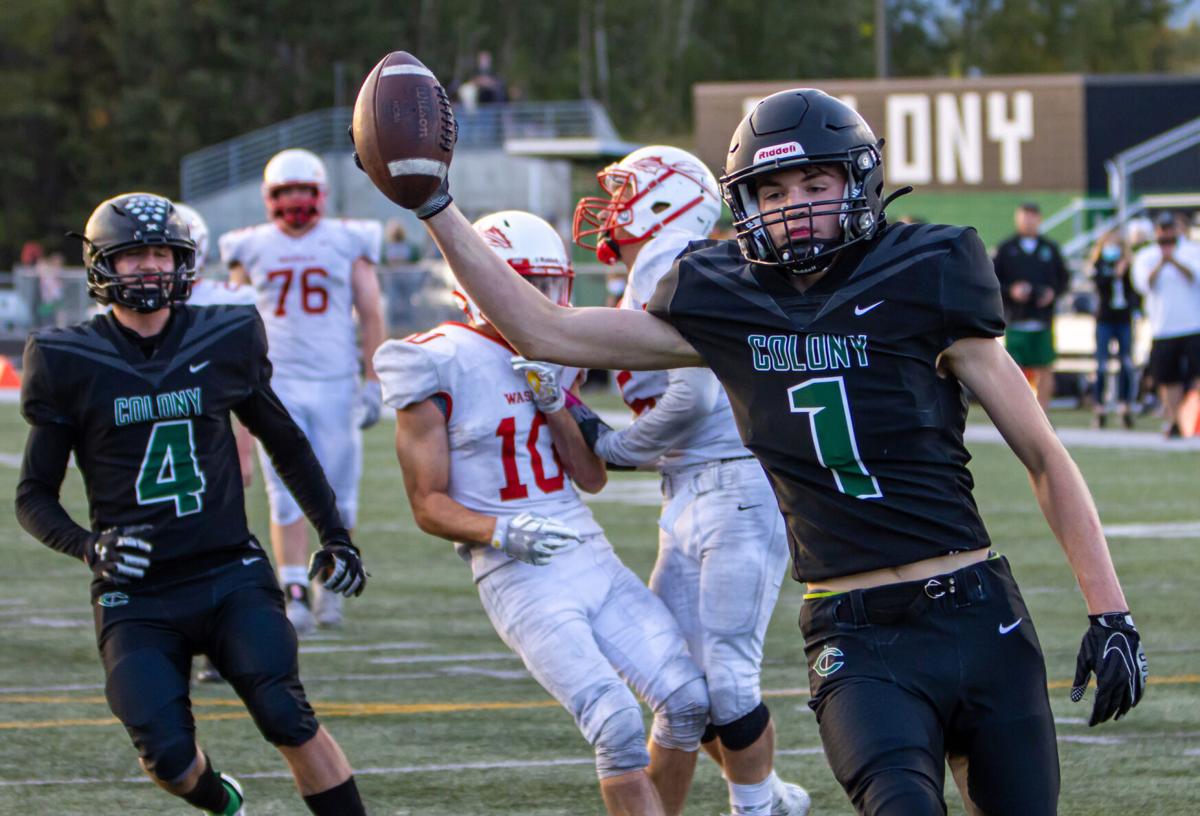 Colony's Patrick McMahon celebrates a touchdown during a win over Wasilla Friday, Aug. 28, 2020. 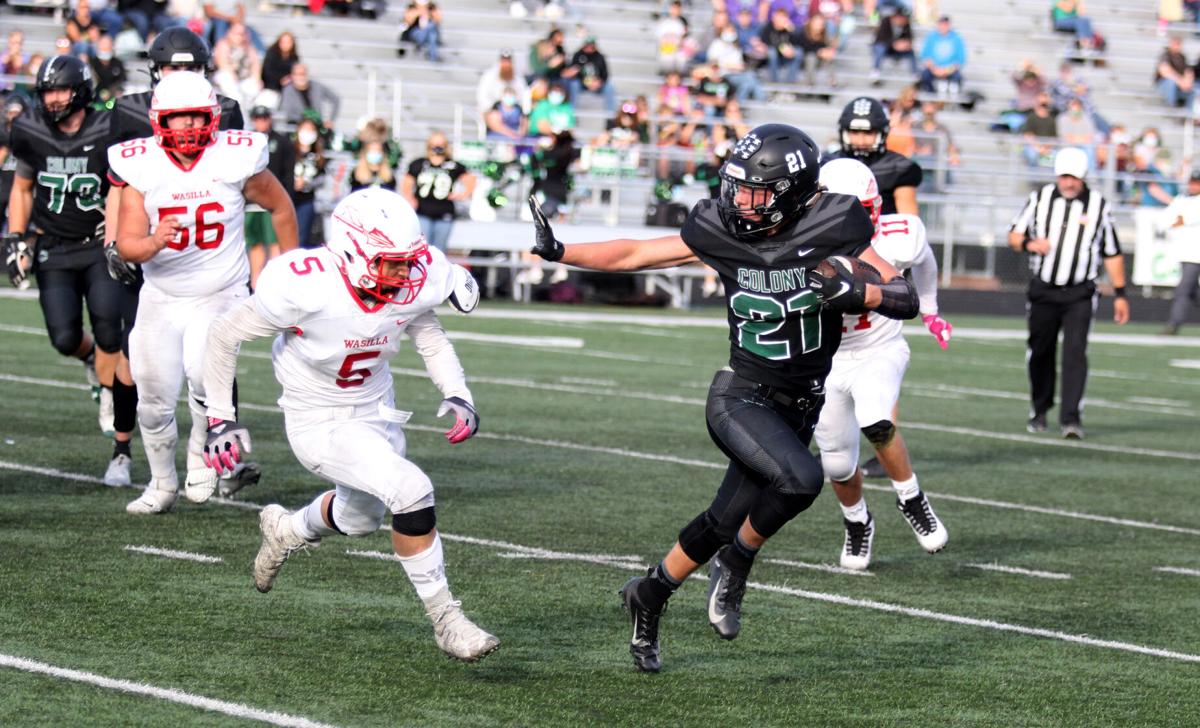 Colony's Aidan Ehmann breaks toward the sideline during a win over Wasilla Friday, Aug. 28, 2020.

Colony quarterback Ben Alley works to escape the grasp of Wasilla defensive lineman Andrew Devine during a win over the Warriors Friday, Aug. 28, 2020.

Wasilla's Colton Lindquist breaks a tackle during a loss to Colony Friday, Aug. 28, 2020.

Colony's Patrick McMahon celebrates a touchdown during a win over Wasilla Friday, Aug. 28, 2020.

Colony's Aidan Ehmann breaks toward the sideline during a win over Wasilla Friday, Aug. 28, 2020.

The Knights scored four times in the final eight minutes and earned a 44-7 prep football win over rival Wasilla Friday night at CHS. Colony’s 27-point surge came after the Warriors cut the lead to 17-7 early in the fourth.

Colony led by 10 points twice in the game, 10-0 and 17-7, after the Valley foes battled through a punt and penalty filled first quarter.

But the Knights used a pivotal drive early in the fourth quarter to answer Wasilla’s lone touchdown of the contest. Colton Lindquist muscled his way into the end zone from three yards out with 11:24 left in the game to cut Colony’s lead to 17-7. Lindquist’s score was the first of the year against the Knights. Colony opened the season with seven straight quarters without allowing a point. The Knights blanked Palmer 49-0 last week.

“I thought it would actually be good for us to get scored on to see how they would react. But their attitudes didn’t drop any,” Nash said of his players.

Four plays later, Colony quarterback Ben Alley connected with receiver Patrick McMahon on a quick slant, and McMahon darted to the end zone for a 23-yard touchdown with just less than eight minutes remaining in regulation.

“Hats off to Ben Alley. He checked a couple of times during the game,” Nash said. “He saw it. We give him that leeway. When he sees it, he checks it. He hasn’t proved us wrong yet.”

Less than three minutes later, Alley added a six-yard scamper for a score to push Colony’s lead to 31-7. Colony’s Camryn Binning provided the back-breaker with a 54-yard fumble return for a touchdown.

Freeman and Aidan Ehmann also rushed for touchdowns for the Knights. Freeman took a toss for a 10-yard score in the first half. Ehmann broke free up the right sideline for a 52-yard touchdown run in the third quarter. Seven different Knights carried the ball Friday for 203 yards on the ground.

“We had some big plays, but this year we’re concentrating on moving the sticks,” Nash said.

Ehmann led the Knights with 117 yards on eight carries. McMahon had four catches for 81 yards. Lindquist led the Warriors with 57 yards rushing.

Colony and Wasilla combined for six punts and four first downs during the first quarter.

Colony improved to 2-0, while Wasilla dropped to 1-1. The Warriors opened with a 33-0 win over Houston last week.

In other action Friday night, Houston beat Redington 35-14. Valley teams were the only Alaska squads in action over the weekend. Games in the Anchorage area and the Northern Kenai Peninsula have been canceled until at least after Labor Day. Games in the Fairbanks area were canceled after a player who competed in the West Valley-Lathrop game last week tested positive for coronavirus.

Fall sports programs within the Mat-Su Borough School District will play teams only within the district through at least Oct. 14.

Wasilla will host Redington Thursday at 6 p.m. Colony has a bye week.