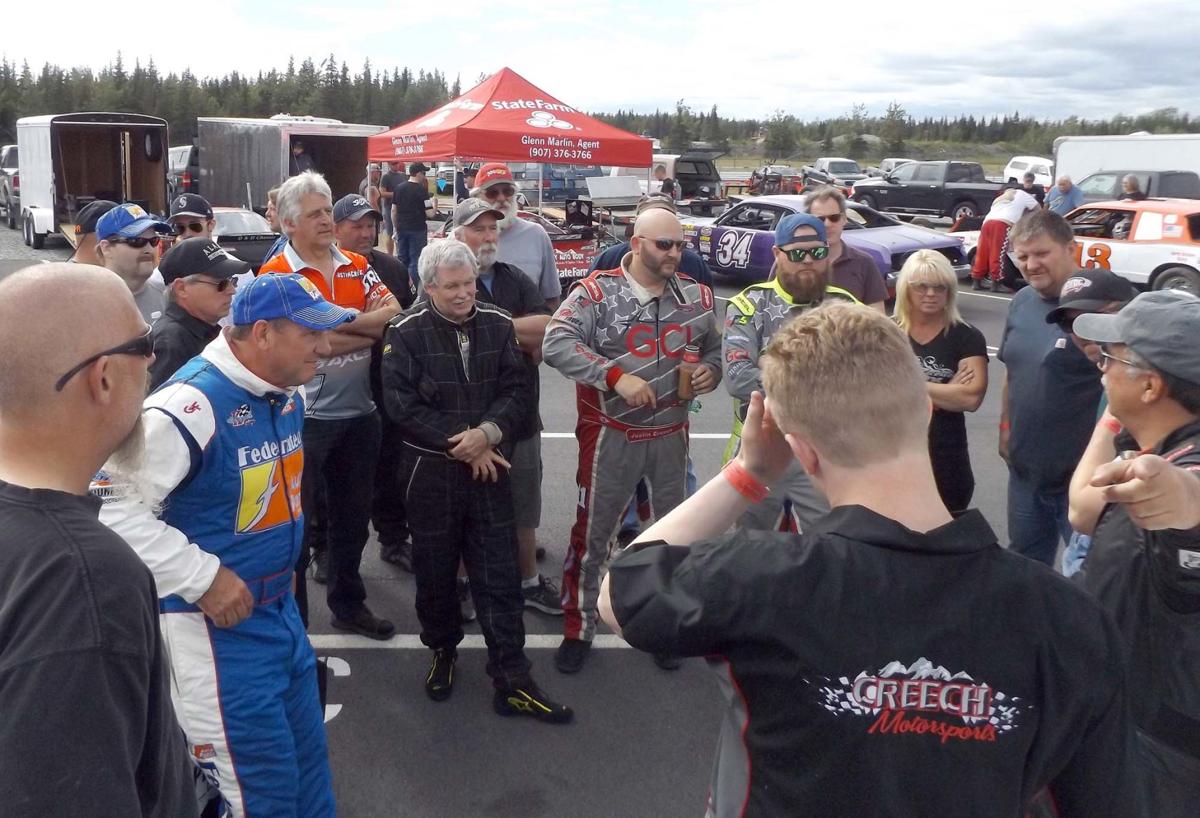 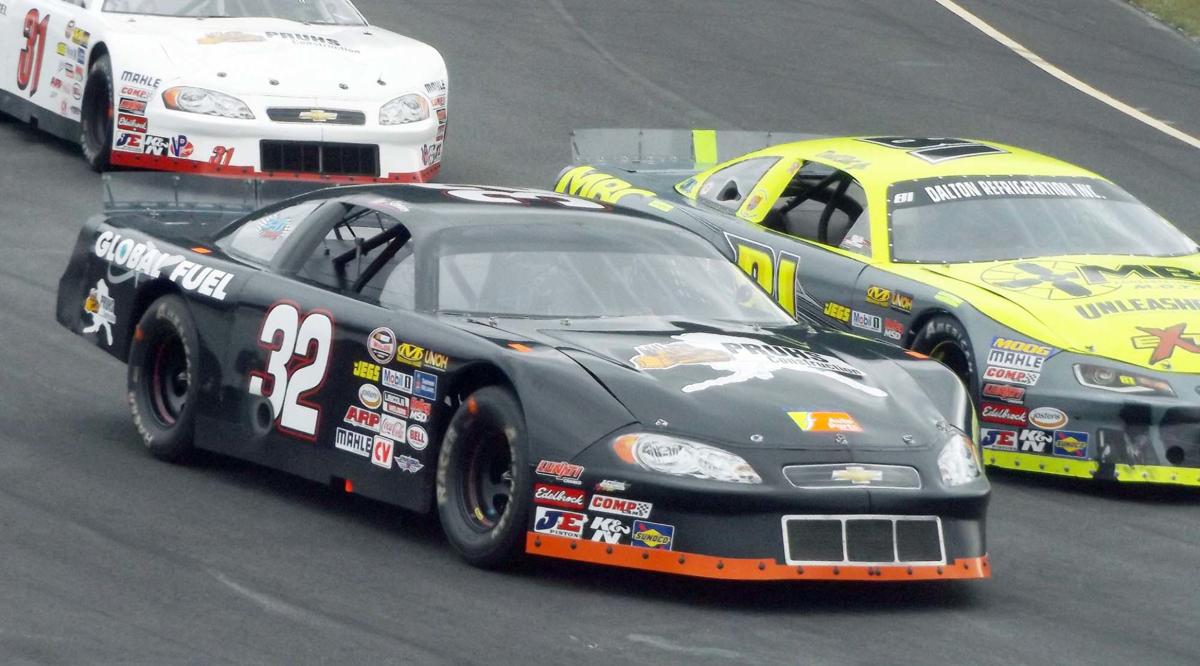 PALMER — After opening its brand new NASCAR-approved oval track in 2016, Alaska Raceway Park had the facility it dreamed of.

Now in its third year of operation, the place is getting the drivers it dreamed of.

With a robust crowd of gearheads and racing diehards flooding the grandstands, Alaska race fans got their first taste of stock car stardom Saturday with the arrival of NASCAR legend Ken Schrader, who made his first trip to Alaska for a bit of fun.

"We're going to race tonight, then do a little sightseeing (Sunday)," Schrader said before hopping in the car for practice.

Schrader drove a No. 32 Chevy late model provided by Dana Pruhs, owner of Pruhs Construction in Anchorage, and competed against a stout field of six challengers.

He also added a notch to his belt after visiting and racing in the 48th state of his long career. Schrader said the only two states he has yet to race in are Hawaii and Rhode Island, but he plans to get to each eventually.

Schrader, 63, is a retired NASCAR driver who spent more than 30 years racing at the premier level of stock car racing in America, racking up eight top-10 points finishes in what was then the Winston Cup series and earning more than $38 million in prize money.

In 29 full seasons on the Winston Cup scene, Schrader picked up four victories, but was known as a better starter with 23 career poles (earned by the fastest qualifier), including three years in a row at the prestigious Daytona 500.

While his professional days are behind him, Schrader still tours the country running asphalt and dirt late models with a few good buddies, something that he enjoys doing out of sheer joy and passion.

Earl Lackey, CEO of the facility and a longtime owner of Alaska Raceway Park's drag strip, said having a name like Schrader come out to race could only be a benefit, and he took notice of the anticipation.

"It promotes the image of the track in the state," Lackey said. "We expect a lot of folks from Fairbanks, the Kenai, some from Outside.

"The lots are fuller and people came to see him."

Lackey said he hopes Schrader's visit will help lure other big name drivers to the Last Frontier to get their racing kicks, noting that another national-level talent in Bobby Reuse will be racing July 14.

"I think it's the fact that we have a first-rate facility that brings them here," he said.

Upon arriving at Alaska Raceway Park Saturday afternoon, Schrader took the opportunity to look over the equipment that Pruhs brought and crawled into the No. 32 Late Model Chevy for some fast laps around the 3/8-mile track.

After getting out, Schrader had nothing but praise for the three-year old track.

"This whole facility is phenomenal," he gushed. "I can't imagine what winters are like around here, but there's not a bump on it. Everything was done first class."

Bumping shoulders with some of Alaska's best — "I was a little shocked he knew who I was!" exclaimed Iditarod champion turned Legends car driver Lance Mackey — Schrader trailed a crowd of well-wishers throughout the pit area.

Schrader said his journey to Alaska fell into place with help from longtime sponsor Federated Auto Parts and a contact of his that works for the company in Alaska. A phone call set the stage.

"He asked me, 'Interested in coming up here?," Schrader recalled.

When Lackey's daughter Michelle Maynor visited Charlotte, North Carolina, as an Alaska Raceway Park representative last fall for the postseason awards banquet that celebrates the various regional and state-level touring series, she got to talking with Schrader and fellow friend and race Kenny Wallace about coming up for a northern visit the following summer.

Schrader said the opportunity to visit Alaska — between races in Illinois and Colorado — could not be passed up.

"I thought give me a reason to not," he shrugged.

Perhaps the only thing that surpasses his racing knowledge is his personality. A keen wit has left many in the garage area buckled over in laughter with the stories Schrader has gathered over the years.

When asked what brought him up to race in Alaska, Schrader answered, "Alaska Air."

Schrader made his mark in NASCAR as an easygoing personality who attracted plenty of fans and never an enemy. Known for longevity — the veteran is approaching 50 years of lifetime racing — Schrader sits 11th all-time in NASCAR Cup starts with 763 over a 29-year career.

Growing up in Fenton, Missouri, Schrader cut his teeth racing in the midwest dust bowls in stock cars, sprint cars, midget cars and late models, which helped prepare him for the big time. Schrader got the racing bug at age 16 and treated it at St. Louis's Lake Hill Speedway, a 1/3-mile paved oval that provided him the opportunity to tune up for the big leagues.

When he got to NASCAR in the early 80's, he was able to run well enough in small budget cars to attract the attention of Rick Hendrick, an all-timer in the sport of NASCAR who was recently inducted into the NASCAR Hall of Fame.

In Hendrick equipment, Schrader had some of his best years, and for a time was the man to beat on the high banks of Daytona International Speedway, racking up three Daytona 500 poles in a row from 1988 to 1990. He never won at the 500, known as the "Super Bowl of Stock Car Racing", but finished second in 1989 after starting first.

His best season came in 1994 with a fourth-place year-end finish in the Winston Cup points standings. In a time-intensive series like NASCAR, Schrader said he still managed to get out and race a jaw-dropping 119 times that year outside of Winston Cup.

Last year, Schrader said he ran 65 events across the country in his dirt and asphalt late models, with another 52 days spent doing promotional events with Federated Auto Parts.

After the races, Schrader made his way over to the fan side of the track to greet the folks that came out to see their hero. As someone who has seen and raced in almost all 50 states, Schrader said he sees the kind of passion and fervor that keeps hearts pumping and families returning year after year at a track like Alaska Raceway Park.

After a mere 24 hours in the state, Schrader could see that auto racing the 49th state is a growing passion for local fans, but cautioned that it always begins and will always need to be firmly rooted in the grassroots level.

"The cheaper the cars are, the better it is," he said. "It's supposed to be like this."

At the end of the day, he said it's most important to cultivate the local short tracks that dot the country, the grassroots racing that brings together friends and families on Friday and Saturday nights with cheap admission and cheaper food and drink.

As long as small-town racing is strong, Schrader said, there can be a strong community that the sport binds together.

"I'm happy to see the enthusiasm and the spectators are growing," he said. "The more remote the tracks are and the more enthusiasm there is, it'll pay off down the road."

I can remember a day many years ago when Mr. Lackey addressed the Butte Community Council and explicitly promised he had not plans to add an oval track to his facility. I could easily spot the mental parentheses (...at this time.). The issue on the table was noise abatement. In those days, I lived five miles from the drag strip and heard the engines clearly through closed windows every weekend. I can only imagine what the noise is like now. So much for assurances.