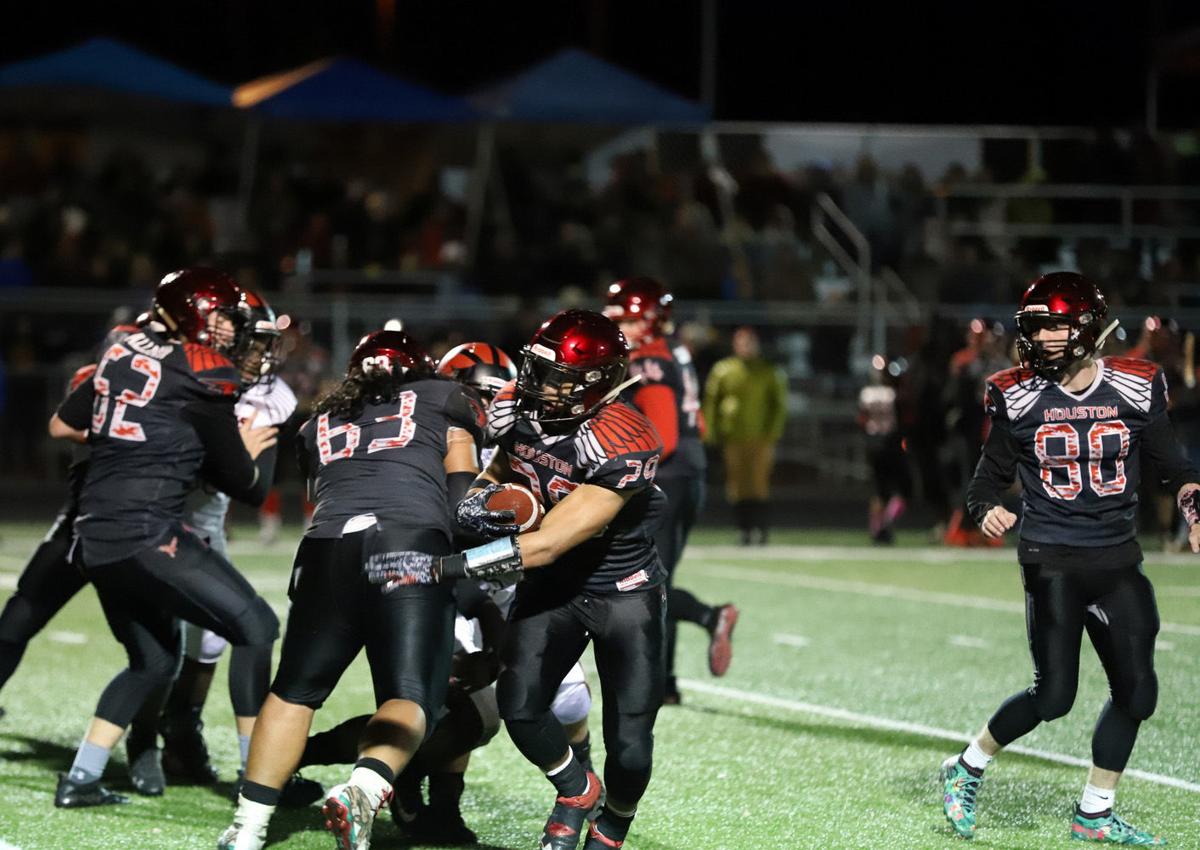 Houston fullback Kennedy Fono runs for a gain during a 64-21 win over Eielson in the Division III semifinals Friday at Houston High School. 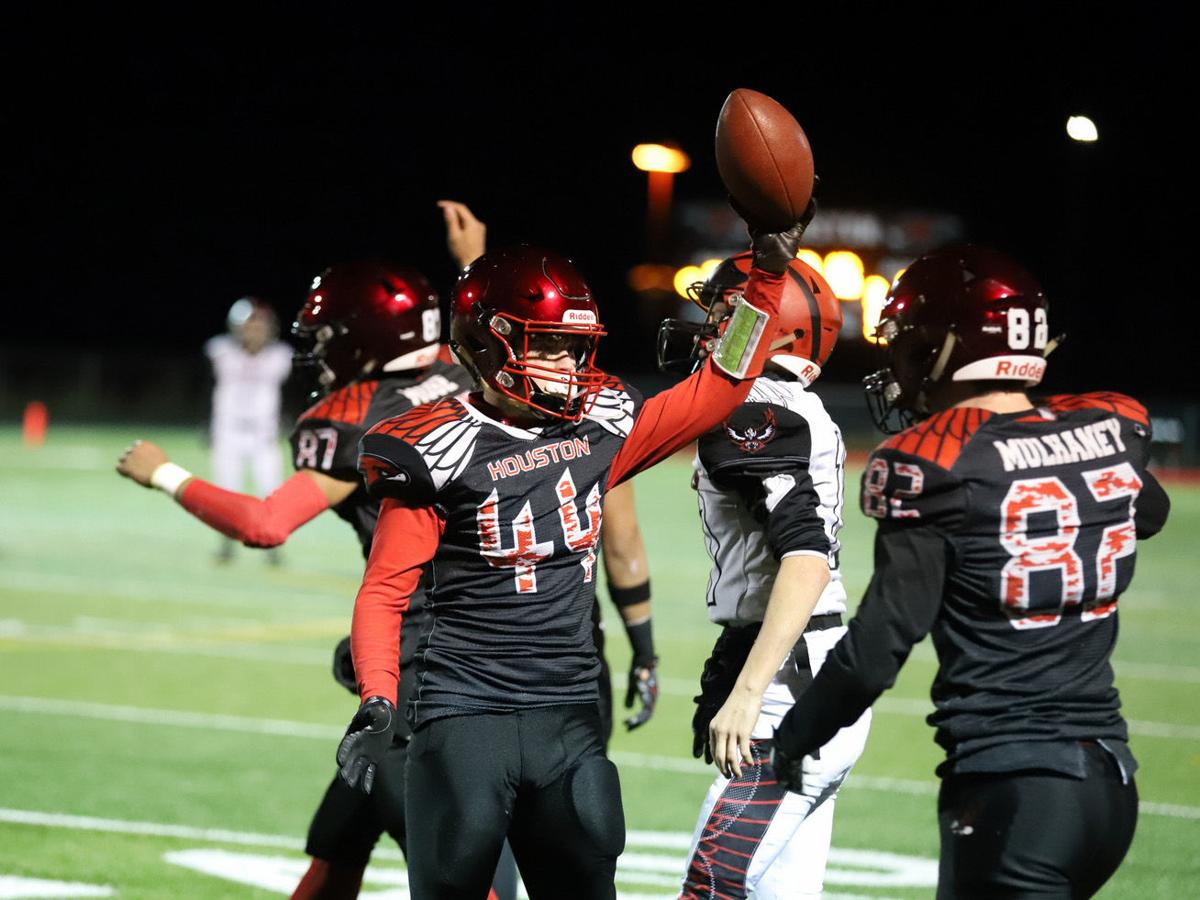 Houston’s Tucker Croghan recovers a fumble, one of six turnovers forced the the Hawks during a 64-21 win over Eielson Friday. 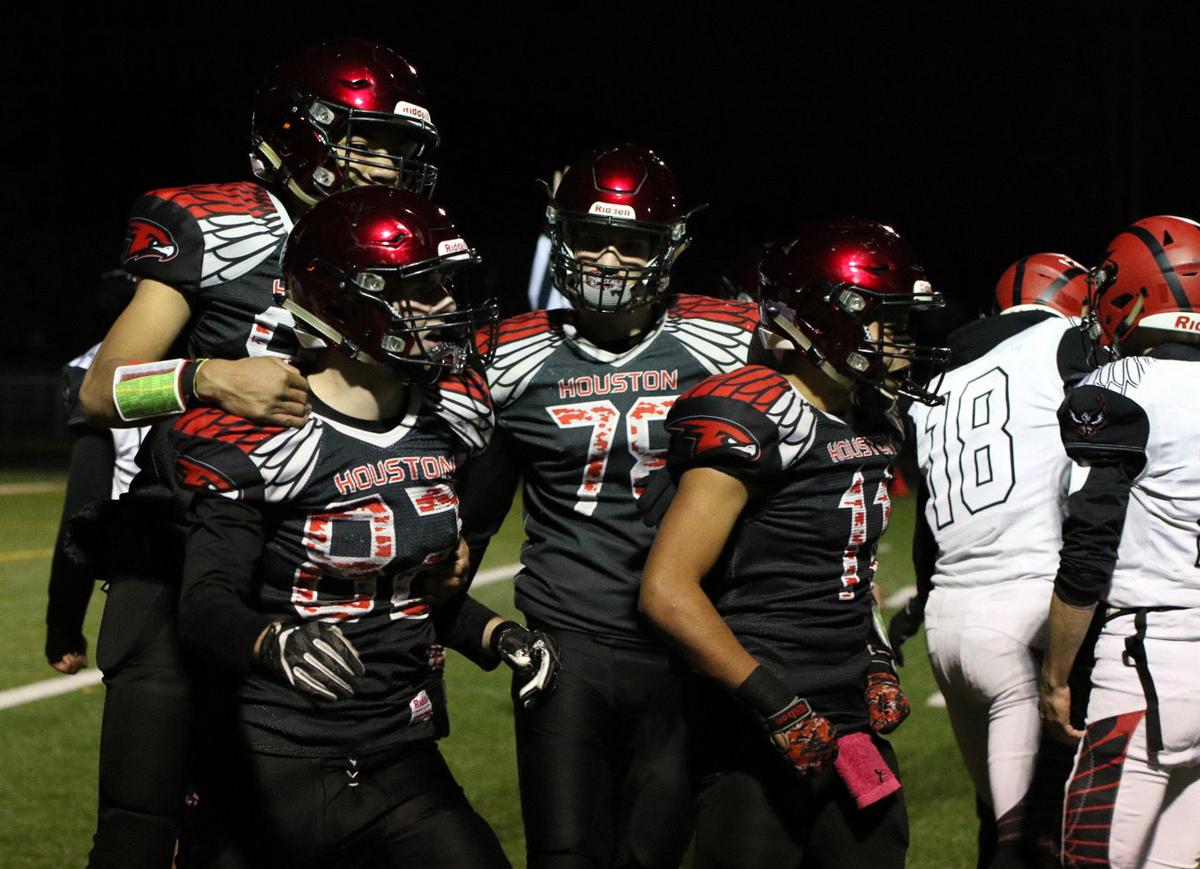 The Houston Hawks have advanced to the state title game for the second time school history.

Houston fullback Kennedy Fono runs for a gain during a 64-21 win over Eielson in the Division III semifinals Friday at Houston High School.

Houston’s Tucker Croghan recovers a fumble, one of six turnovers forced the the Hawks during a 64-21 win over Eielson Friday.

The Houston Hawks have advanced to the state title game for the second time school history.

HOUSTON — Since the Houston Hawks first fielded a football Program in 1997, the Eielson Ravens have had Houston’s number. But on Friday night the Hawks finally scored that elusive win over Eielson and notched one of their biggest victories in school history.

As the Hawks celebrated the opportunity to play in the state championship game for the second time in school history, longtime Houston defensive coordinator Jared Barrett reflected on Houston’s first win over Eielson, a longtime Alaska small schools power.

Barrett, a Houston player during the Hawks inaugural season of 1997, praised the work of his defense, which combined with the special teams to force six turnovers.

“I am so incredibly proud of this defense,” Barrett said. “They are buying into the system. We have a game plan every week, and they’re believing in it.”

The Hawks used a 29-point third quarter to beat Eielson for the first time, stay undefeated at 9-0 and advance to the title game for the second time in four years. Three Eielson turnovers in the third quarter led to Houston touchdowns. But the effort started during the first defensive series of the second half, Barrett said.

“We said this series on defense is the most important series of the game,” Barrett said.

Eielson received the third-quarter kickoff and was forced to punt after only three plays. Jeremiah Barrett sacked Eielson quarterback Payton DeVaughn for a nine-yard loss that pinned the Ravens on their own 16-yard line.

“We wanted to pin them deep,” Jared Barrett said. “This was going to change the tide of the game. If we let them march down and score, that will give them the momentum.”

Eielson was forced to punt, and it was Houston that would march down for a quick score. Three plays later, Owen Mulhaney scampered in for a 5-yard score. It was the first of three straight touchdowns for Mulhaney in the third quarter alone. Mulhaney’s next two scores were set up by fumbles recovered by the Houston special teams.

“The special teams on kickoff, getting the ball, that led to a little scoring frenzy,” Barrett said. “That buries teams. That’s hard to come out of.”

Mulhaney added scores of 32 and 11 yards during a 90-second span. Tolupo Falaniko added a 9-yard touchdown late in the fourth quarter.

The Hawks blew past Eielson in the third, but Houston’s biggest touchdown may have come during the final seconds of the second quarter. Eielson took an early 7-0 with the first of Will McManus’ two touchdowns in the game, but Houston answered with 21 straight points. Eielson’s Brandon Polesky scored on a 17-yard run with 2:06 left in the first half to cut Houston’s lead to six points. With only 31 seconds left in the second, Houston’s Kennedy Fono broke free for a 39-yard touchdown that pushed Houston’s lead to 13 points at the half.

“That was huge,” Mulhaney said after the win. “It was a big deal. It gave us a nice cushion.”

“Unreal,” Owen Mulhaney said of Houston’s offensive line. “The block all of the way. They never give up.”

Eielson, also known for a run-heavy attack, was held to 200 yards on the ground.

“They can run the football,” Barrett said. “You saw that at the start of the game.”

Of Eielson’s 200 yards rushing, 84 came on its first scoring drive of the game. Barrett said the Hawks made adjustments on the field. But more than that the Hawks showed their resiliency, Barrett said.

“One of the best things about this team this year that we’ve lacked in the past, when we get down we’re fighting back,” Barrett said.

Now, the Hawks have another chance at school history with the chance to play for a state title.