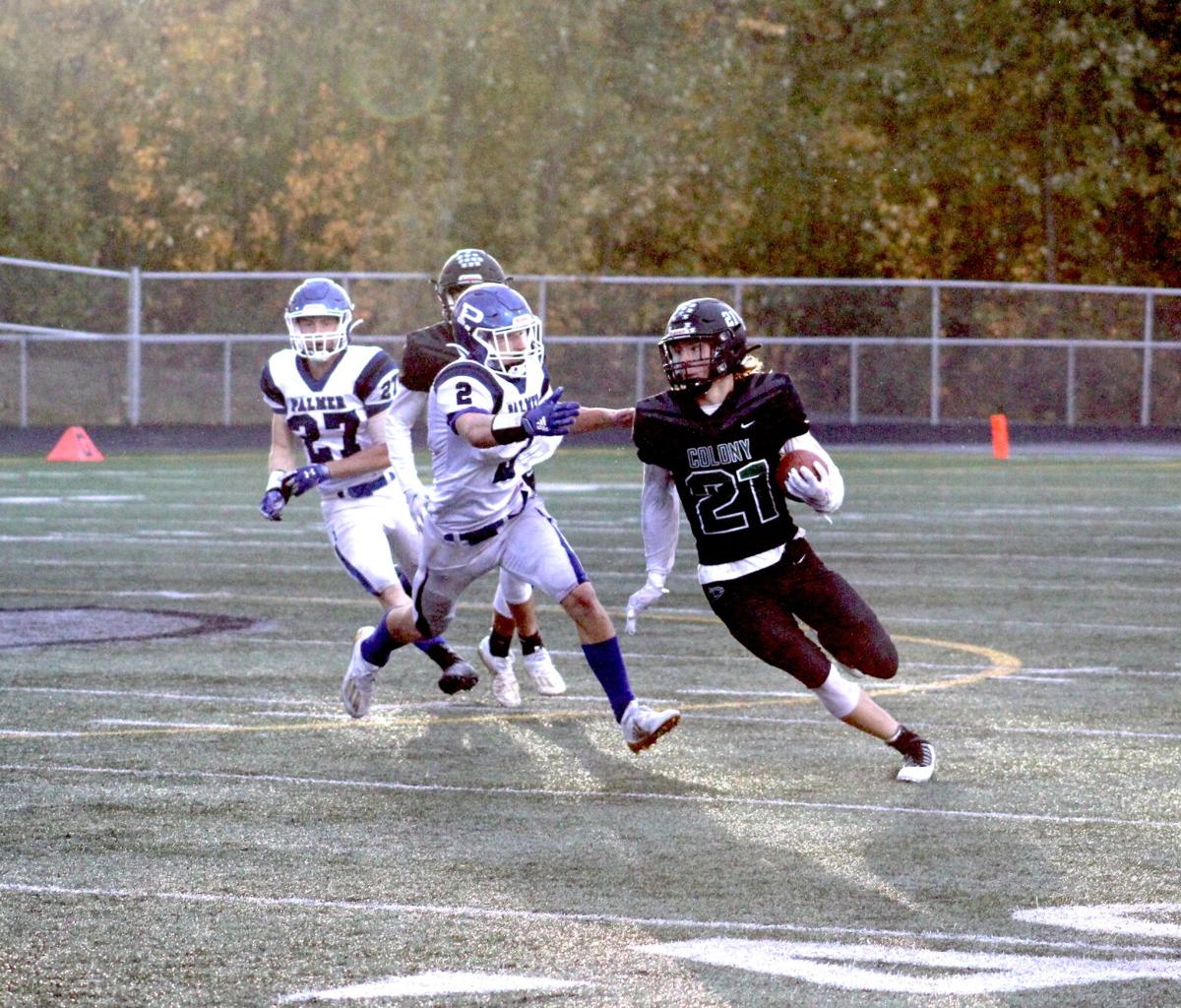 Colony senior Aidan Ehmann runs for a gain during a win over Palmer. Ehmann rushed for three touchdowns in the victory. 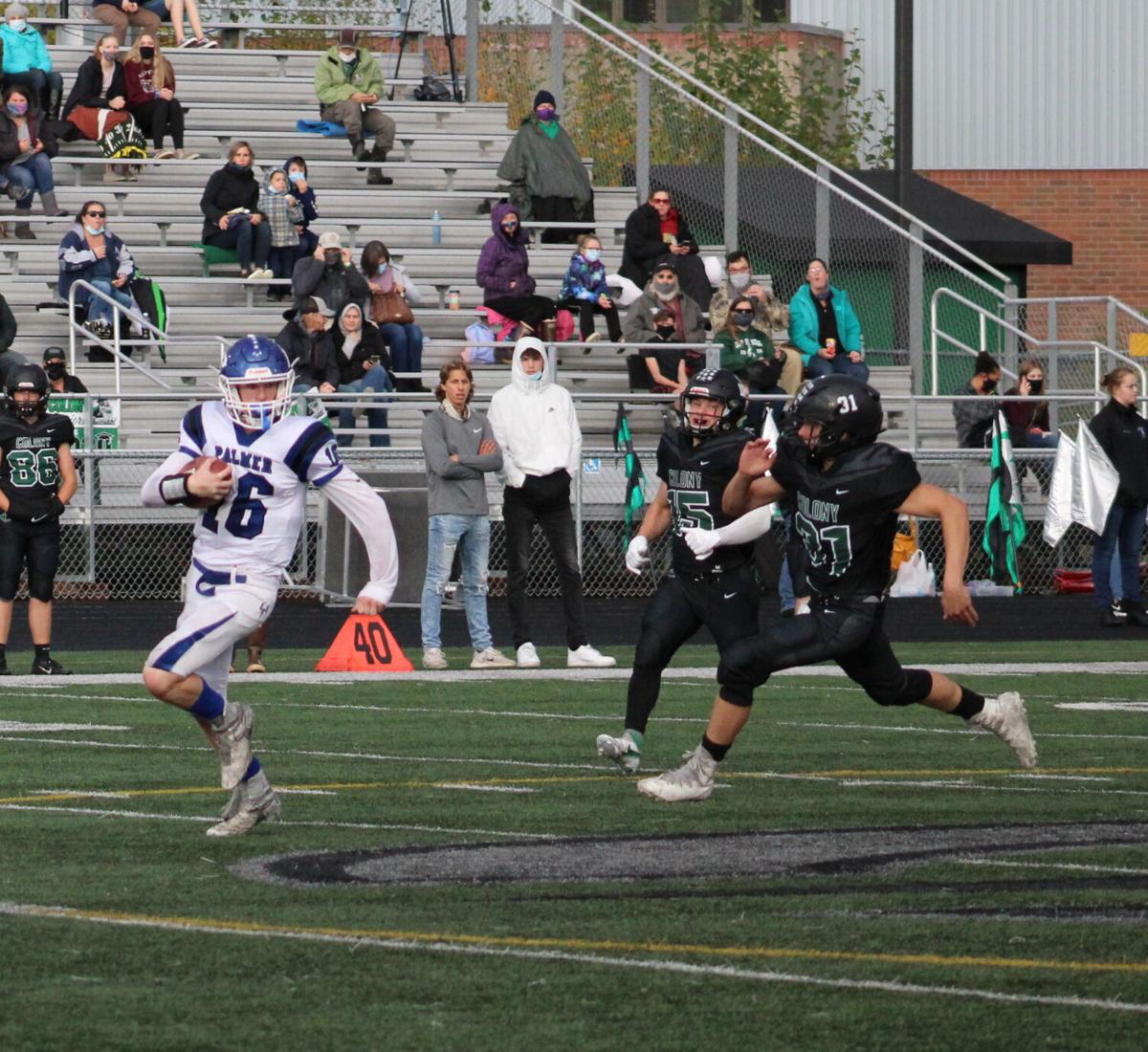 Palmer's Elijah Barnes runs for a long kickoff return during a loss to Colony.

Colony senior Aidan Ehmann runs for a gain during a win over Palmer. Ehmann rushed for three touchdowns in the victory.

Palmer's Elijah Barnes runs for a long kickoff return during a loss to Colony.

PALMER — The Colony Knights outlasted the Palmer Moose on Pride Field at Colony High School on Friday, winning 27-7 for their second defeat of Palmer this season.

The Knights star on Friday was senior Aidan Ehmann who accounted for three scores and over 200 yards on offense, and intercepted Palmer quarterback Connor Heal. On the Knights second possession, Ehmann took the ball on a run for 16 yards on the first play and scampered untouched 35 yards into the end zone to put the first points on the board against Palmer.

“He’s an incredible utility player. We can put him anywhere. I mean he was really one of our better players last year and this year the difference, he’s just added another level and his leadership just piles on top of that,” said head coach Robbie Nash of Ehmann.

Ehmann would go on to carry the ball 21 times for 225 yards. Of Ehmann’s 21 carries, eight were for more than 10 yards, including two of his three scores. After a costly defensive pass interference penalty against Palmer, Ehmann took advantage and capitalized with another score, this one from the nine yard line.

“Our O-line and my lead blockers, give it all to them,” said Ehmann.

“They never gave up. It’s always hard, normally like when you play a team and start pounding on them they’ll just lay down, but they never laid down. They just couldn’t stop our running game,” said Ehmann of his opponents.

Both Colony and Palmer had two turnovers, but Colony made their takeaways count. With 6:28 left in the second quarter, Colony’s Spencer Lagg aggressively tackled Palmer ballcarrier Michael Smith, pulling the ball out of his hands for the fumble. On Colony’s offensive drive that followed, Ethan Kraus punched in a 10-yard touchdown, but Krozel’s kick was blocked by the Palmer defense. With the victory over Palmer, Colony moves to 3-0.

“It’s a good feeling. We want to play Anchorage though, that’s the big thing. That’s who we want to play,” said Ehmann.

Led by Ehmann’s bursts of speed with the ball, Colony’s scoring drives were quick and judicious. Palmer’s offensive possessions nearly lasted entire quarters. With a heavy dose of Smith and Pritchett, the Moose wore out the Knight defense up the middle.

“They ran up the middle on us and it took us a while,” said Nash. “It was no secret. They knew what they were doing right.”

Smith received the majority of the carries in the first half and ended the game with 105 yards rushing on 23 carries. Pritchett bore the brunt of the offensive responsibility in the second half and finished with 74 hard fought yards on 18 carries.

“It’s good. It helps build the kids confidence in games like this,” said Nash. “One of the things that’s really driving us is there’s hopes out there that there’s going to be a playoff picture in October. We’re hoping that we get a chance to get in the playoffs with some of the Anchorage teams.”