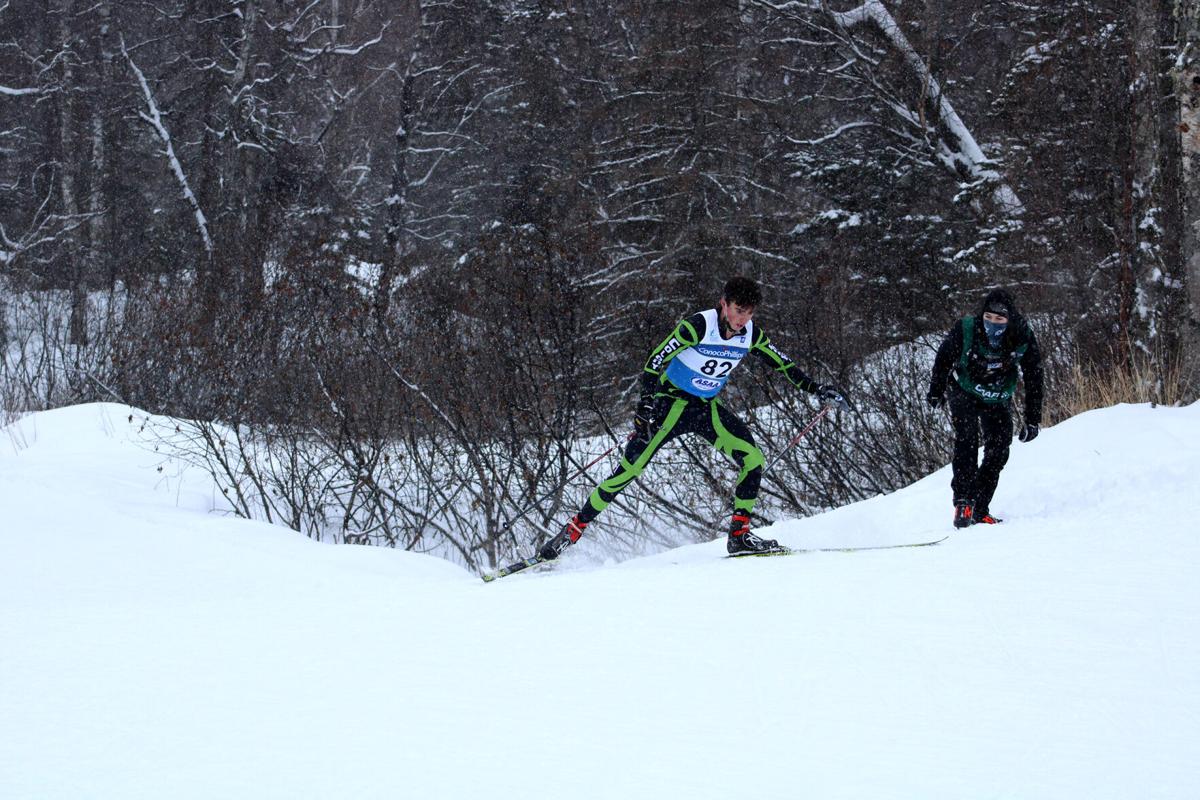 Colony's Garrett Streit works his way up an incline during the ASAA state ski meet. 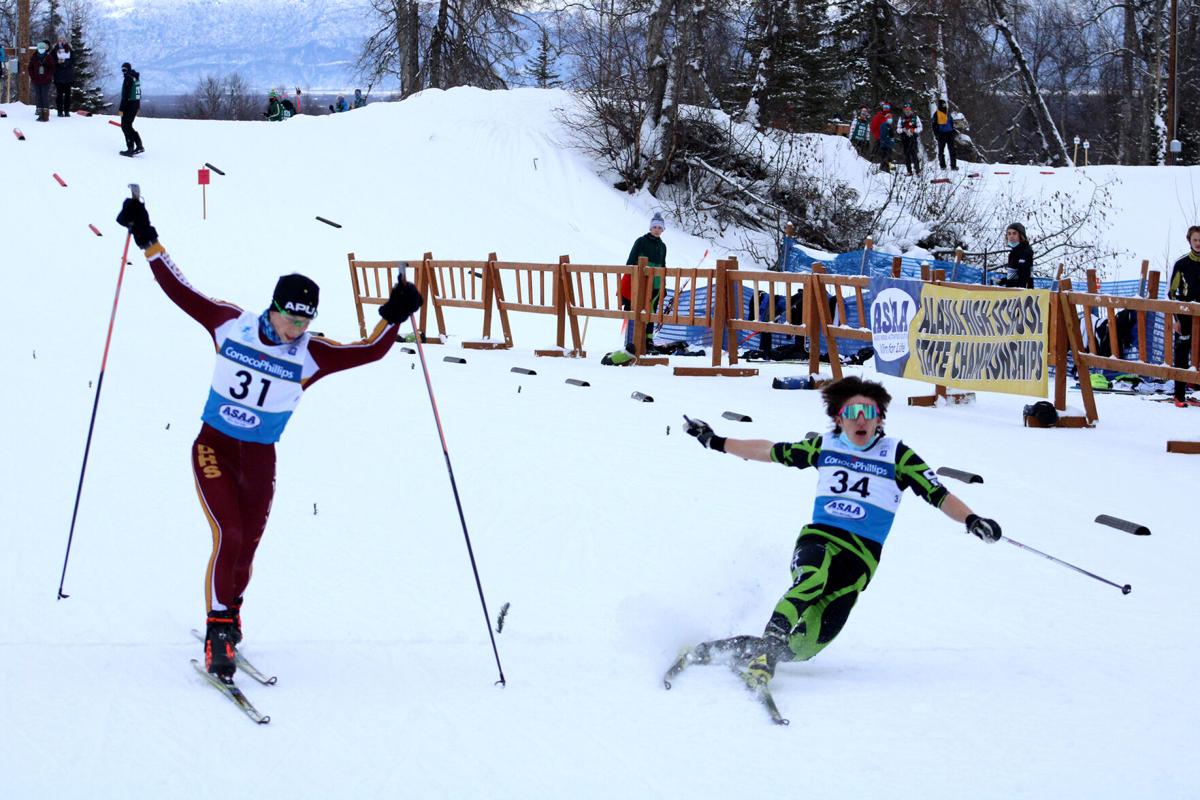 A pair of skiers nearly collide during the ASAA state championships. 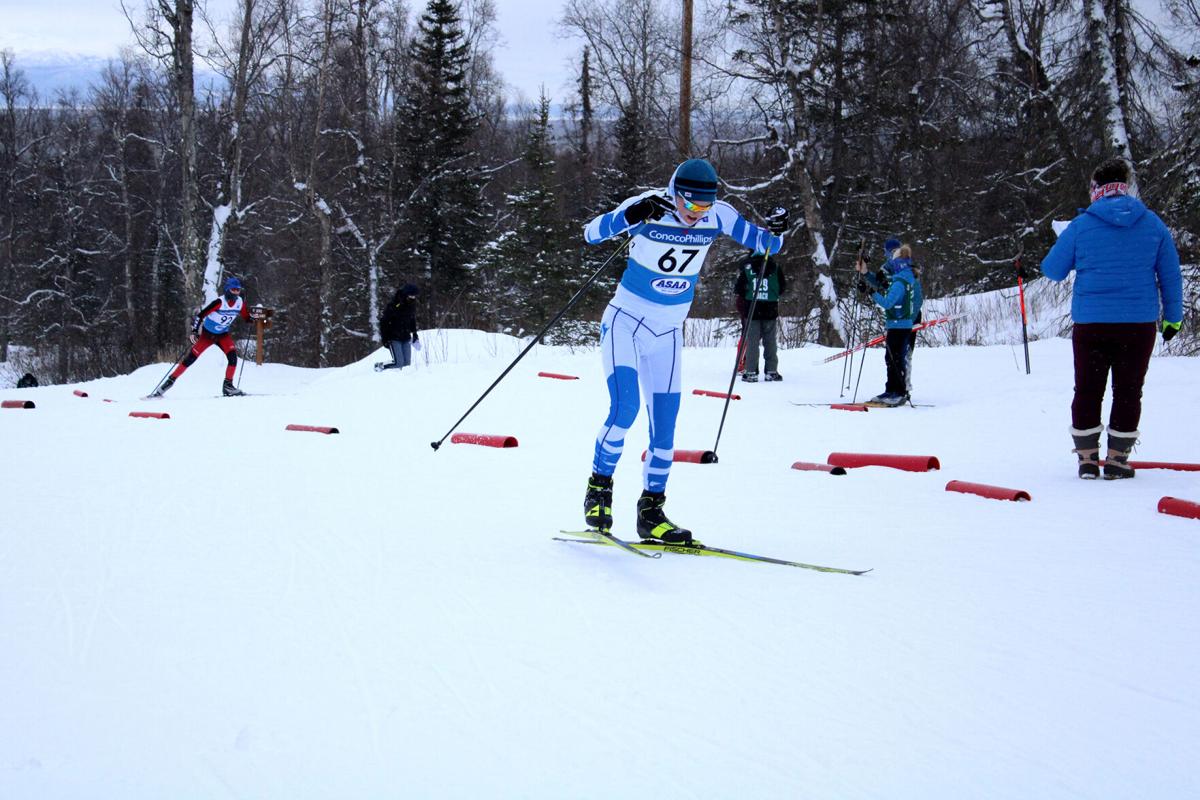 Colony's Garrett Streit works his way up an incline during the ASAA state ski meet.

A pair of skiers nearly collide during the ASAA state championships.

“It’s satisfying that they can showcase on a home course, and hearing athletes going my god these trails are so hard and our girls and our boys are like we ski these every day,” said Colony head coach Mark Strabel.

The state ski meet was moved to the Valley by ASAA and skiers from different school districts competed against one another for the first time all season. GPRA was able to host the first state ski meet in the Valley in over 50 years, according to local skiing historian Ed Strabel, who served as an official for the race. Skiers lined up in the stadium at GPRA and took off 30 seconds apart from each other in an interval start for classic races Thursday, skate races on Friday and a classic relay race on Saturday to determine the team standings.

Colony senior Garrett Streit runs a skiing meme Instagram and relished the opportunity to lead the young Knights boys skiers against the top competition in the state.

“I love it man. I love the grid and the vertical feet it’s like there’s no other place in the state where you get 1,300 vertical. It’s like racing up a mountain and you’re on skis it’s a very unique experience,” he said

Colony finished sixth in the boys standings as a team who placed two skiers in the top 20. Noah Hanestad finished 22nd overall and Jayden Rice finished 27th overall for Colony. Rice led all Valley boys with a 22nd place finish in the 7.5-kilometer classic race with a time of 27:27.4 and Hanestad led all Valley skiers with a 15th-place finish on Friday.

“All of our boys are really competitive to each other and it eggs them on during practice time and we’ve got to constantly tell them to slow down today’s an easy day not a race day, so they just push each other,” said Strabel. “The Mat-Su Ski Club started up the junior nordic program and as we’re starting to have those people come on up, but also it’s been a shift from the Palmer girls and it elevates the whole area when we’re always racing against them and seeing them and training here and same with our boys. It’s elevating.”

Fresh snow fell in Hatcher Pass Thursday night and required a late-night grooming from volunteers. Snow began falling again during the girls race on Friday morning and persisted through the boys race, making the wax strategy critical for racers on new snow. Due to COVID-19 protocols, waxing stations were set up along the GPRA parking lot as opposed to behind housed indoors.

“This is fantastic, but it only would’ve happened in a covid year because we don’t have he waxing facilities and the fact that hey nobody can wax inside levels the playing field for us,” said Ed Strabel. “Last year when we got the pistenbully that basically stepped us up as far as the quality of the grooming on the trails so we’re coming into our own here and hopefully with hosting the Arctic Winter Games we’ll be able to get an equipment storage and waxing facility which we really, need otherwise we’ve got to be dependent on a pandemic to be on equal footing with the other major hosting areas.”

The Palmer boys were led by Tom Merritt, who finished 35th overall and Jaxson Lee who finished 40th overall. The pair both posted top 40 finished in each race. Evan Taylor, London Lee, and Alex Adams also competed for the Moose, who took 12th in the team standings.

“Today I’d say it was a challenge due to snow conditions. Based on the snow conditions right here we’re on fast skis, we’re trying to go fast, so it’s nice. It’s a change how state is held up here rather than at Kincaid so it really got us Valley skiers an advantage to work on the hills and transition,” said Merritt.

The Palmer girls posted the highest team score of any Valley team of recent, finishing in 1:13.15. Palmer junior Katey Houser paced the trio of girls who finished in the top 11, taking 3rd place overall. Senior Aila Berrigan took fifth overall and Rosie-Whittington Evans took 11th. In the 5k classic race on Thursday, Ellie Henneman finished in 35th with a time of 19:55.3 and Brittyn Werner finished in 40th at 20:42.7.

The Colony girls were led by senior Lydia Bushey, who paced the Knights with a 27th place finish during the classic race in 19:28.5 and finished 34th overall. Anna Bell came in 52nd, Lucy Shea came in 56th and Nicole Bell came in 59th for the Knights, who finished 12th in the team standings.

“I am a senior this year and so I’m super grateful to be able to have an opportunity to have my last state here and all of the volunteers and coaches and everybody have worked super hard to make sure that it’s safe and we can have this opportunity and I think that’s really awesome for us,” said Bushey.

The young core of Colony skiers felt confident after competing at the state ski meet on their home course.

“Valley skiing is on the rise with ANR, we’re taking it to Anchorage, we’re trying to prove Valley skiing has a chance,” said Simeon Ramirez.

While most athletes were exhausted after the grueling three day competition, not all were eager to compete again soon.