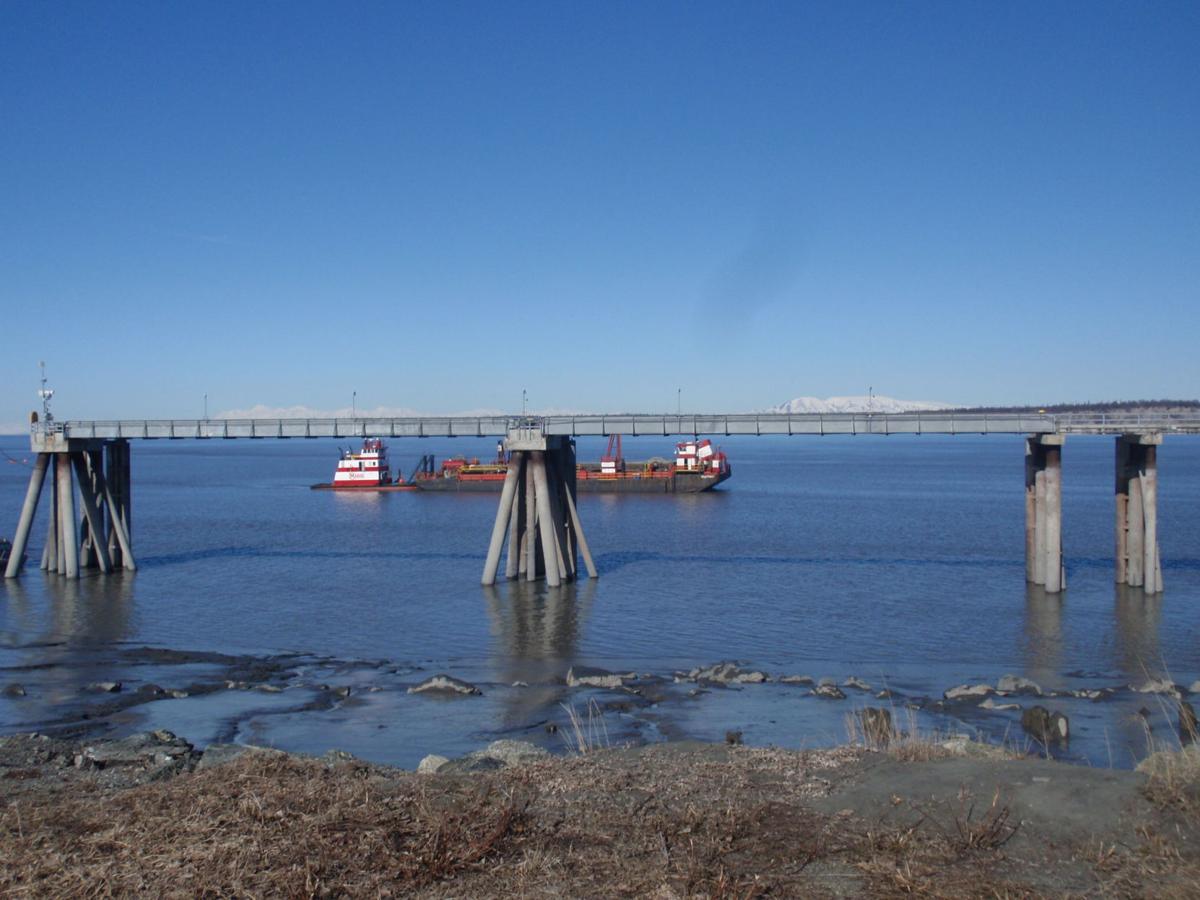 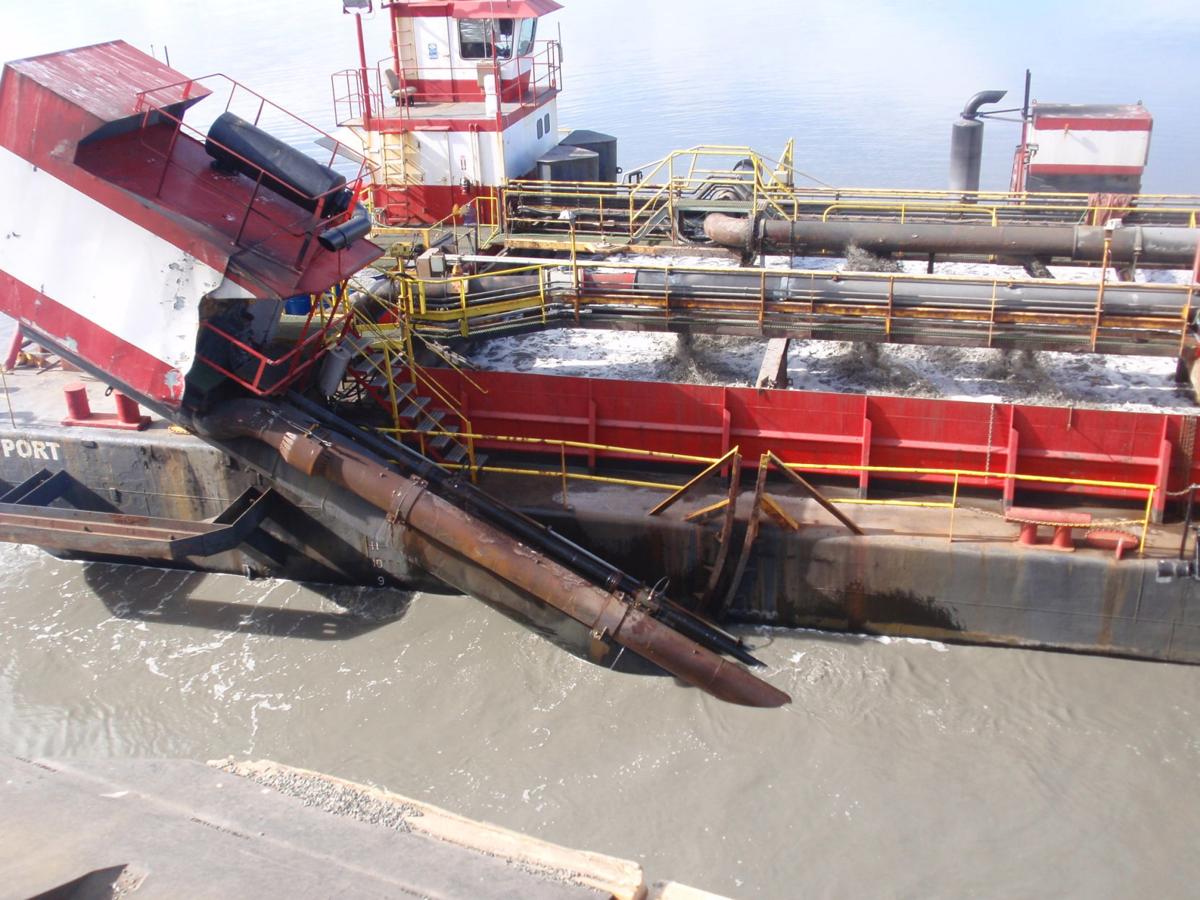 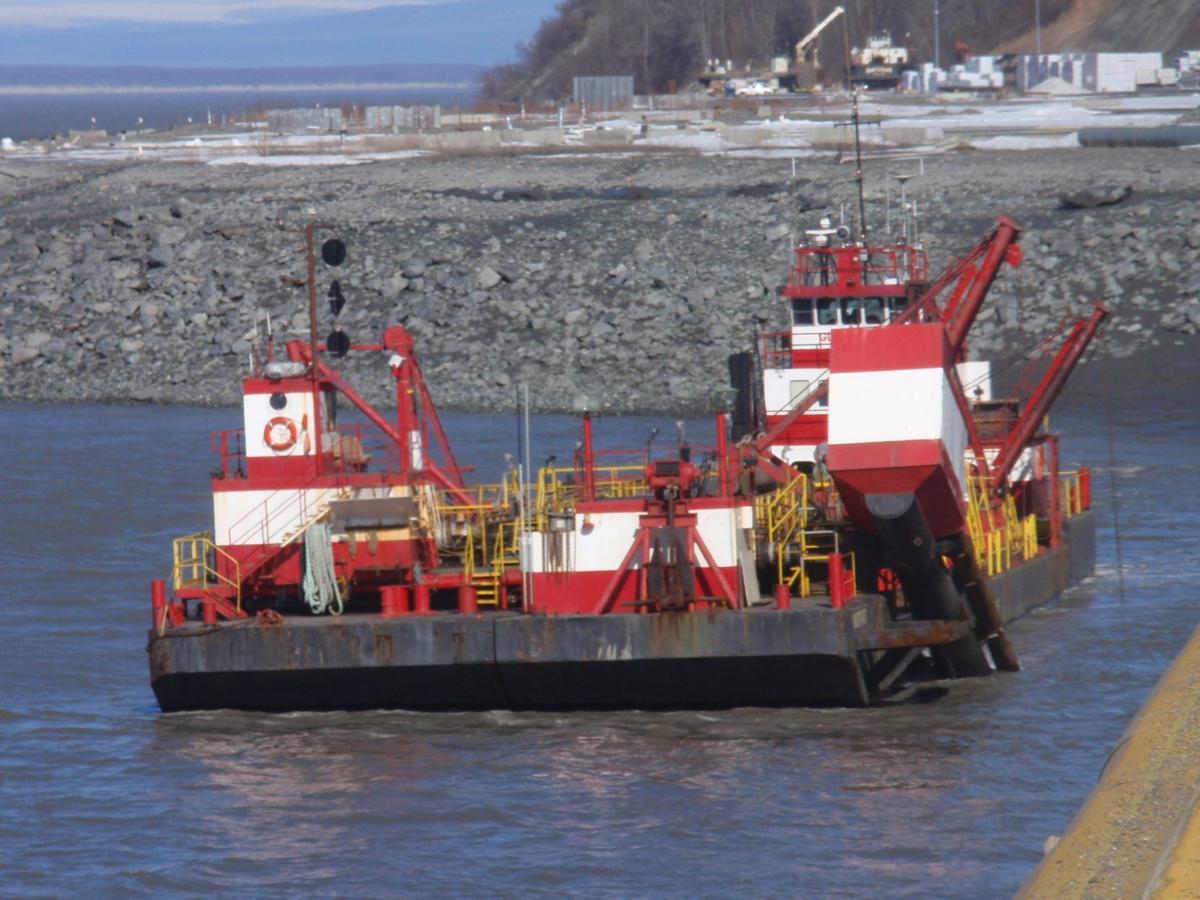 JOINT BASE ELMENDORF-RICHARDSON — All summer long, a crimson and white boat moves back and forth through the waters near the Port of Alaska collecting silt, sand and gravel off the seafloor to allow vessels to navigate the harbor in Anchorage. The boat is a dredging vessel called the Westport, operated by Manson Construction of Seattle, Wash., which the U.S. Army Corps of Engineers — Alaska District contracted to maintain the mooring areas for the past three years.

An estimated 2,400 to 2,600 cargo containers arrive at the port each week to keep stores supplied with consumer goods throughout the Interior and Southcentral Alaska, said Julie Anderson, operations branch chief for the Alaska District.

”We all want our stuff, so it is important that we provide an environment in which shippers can be on time,” Anderson said.

However, underwater shoals in Cook Inlet cause sediment to settle in the harbor creating depths that ships cannot traverse. Shoaling north, south and at the dock face contributes to most of the accumulation in combination with some of the largest tidal fluctuations in the world. A small amount of material comes from sedimentation, the process of sand and silt washing downstream. Together, these processes gradually fill channels, which prevents deeper drafting vessels from navigating the waterways and delivering goods.

For the Port of Alaska, the Westport, a 2,000-cubic-yard hopper dredge, maintains the seafloor to the congressionally approved depth of -35 feet for safe navigation. Its onboard hold area, known as the hopper, carries the sediment load until it can be deposited by opening the split hull at least 3,000 feet offshore where currents will not bring the material back to the port.

”We use a hopper dredge, which has two heads that suction off the bottom and never stop as the dredge moves one to two knots through the harbor,” Anderson said. “If a ship comes in that is not on schedule, then the dredge can quickly move out of the way or if there is a concern about a certain spot in the channel, then the dredge can move to that location to meet the needs of the harbor’s users.”

Located at the north end of Cook Inlet, the Port of Alaska, formally known as the Port of Anchorage, began operations in Anchorage Harbor in September 1961. As the only port in Southcentral Alaska to survive the 1964 Good Friday Earthquake, it has served as the main shipping hub for consumer and essential goods in the region since that time.

The port provides services to approximately 90 percent of Alaska’s population and receives about half of all goods entering the state. Supplies like food, building materials, cars, clothing and fuel arrive every week. Over the years, the port has expanded to a five-berth terminal providing facilities for the movement of containerized freight, iron and steel products, bulk petroleum and cement.

Also, the facility serves as one of 17 sites in the country deemed by the Department of Defense as a strategic commercial seaport. In this capacity, it functions as a vital hub for military operations and deployments, while supporting the major military installations in Alaska and delivering jet fuel to Joint Base Elmendorf-Richardson.

”The port has always had a strong working relationship with the Alaska District on all matters related to dredging and keeping us open for business,” said Steve Ribuffo, director of the Port of Alaska. “Upper Cook Inlet is a challenging marine environment, and the variables we have to deal with are ever-changing. The Corps has always brought under contract competent, knowledgeable companies that have worked with us to flex with our changing conditions and needs. The collaboration is truly appreciated.”

The Rivers and Harbors Act of 1958 authorized initial dredging when Congress approved the establishment of a deep-water harbor in Anchorage. Maintenance dredging has occurred at the congressionally approved depth since the 1960s. After the construction of Terminals 2 and 3, Congress approved the expansion of the dredging area from 2,000 linear feet to its present-day range of 3,000 linear feet in 1977 to accommodate the expanded port.

”The usual dredging season is from May 1 to Nov. 1, when the port is ice-free,” said Donna West, project manager for the Operations Branch. “However, to address winter shoaling in Terminal 3, the contract has an option to start work early as April 1.”

Once the results of the surveys are complete, they are provided to the port, U.S. Coast Guard, shippers, marine pilots and other interested parties for their use. After the earthquake on Nov. 30, 2018, these surveys were completed within 24 hours to provide shippers with updated navigation data in advance of their scheduled arrival.

Furthermore, the Alaska District considers wildlife when calculating its dredging decisions. Marine mammals like the beluga whales in Cook Inlet largely stay near preferred feeding sites at the mouths of rivers, but special precautions are taken to ensure their safety around the dredging equipment. Each time a whale comes within 50 meters of the vessel, the crew pauses work to allow the beluga to remain safe and undisturbed in the water.

”We have been really successful in working with the National Marine Fisheries Service in measures to efficiently dredge, but still protect the resource,” Anderson said. “We tend to see them in August when the silver salmon are here and, though we occasionally do have to stop for the belugas, we have few long-lasting delays.”

So, as summer continues in Alaska, rest assured that the Westport will continue to navigate the silty waters of Cook Inlet to keep shipping lanes open and the state’s largest seaport accessible year-round.

WASHINGTON — Only 13 months into his Army career, Ken Foulks learned that he would…

WASHINGTON (AFNS) — Based on overwhelming feedback from the field, Department of t…